Jaime Reyes seems to be popping up everywhere these days. Cartoons, Smallville, video games, and even a possible live action show in the works. Couple all of that exposure with this issue, and it looks as though DC is trying to make Jaime Reyes their very own Peter Parker. However, the powers that be at DC seem to be confusing quantity with quality. 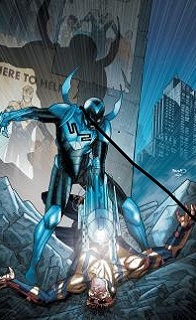 – Paco and Brenda come to NEW YORK CITY to find Jaime — and get caught by the DEO!
– Superfail continues its smear campaign against BEETLE!
– BOOSTER GOLD is the only hero to come to BEETLE’S defense — or is it just a trap?!

I picked up the first few issues of the new Blue Beetle when the relaunch started and dropped the title when I had to limit the number of books in ye’ old pull box. Popping back in to check up on Jaime Reyes, there seems to have been some changes, and most don’t appear to be for the better. Blue Beetle is in New York now, for reasons that haven’t really been explained by this issue. The Azul Avenger has also apparently been branded a public menace by an anti-metahuman website called “SuperFail,” which sounds more  like a website dedicated to grevious skateboard injuries than a serious news outlet. So lets see here: New York City. Teenage superhero. Named public menace by the press. This sounds eerily familar… But I digress. Despite the gripes about the overall plot here, this issue is OK, and has a few good twists.

The first notable plot point of the issue is, of course, the guest appearance by Booster Gold. Long time Blue Beetle or DC fans will be aware of the history between Booster and Blue Beetle, which of course doesn’t apply at all in the New 52. Booster appears to be the same Booster fans love or hate or love to hate: grandstanding, self-important and self-promoting; it is good to know some things haven’t changed too much. However, if you are looking for a New 52 reunion of the Blue&Gold, do not get your hopes up yet. Also do not judge the book by its cover.

What is exciting about this issue is the set up for the ongoing plot. Remember, kids: Booster Gold is from the future, and he has at least some idea what is supposed to happen. There seems to be some major brouhaha brewing in space and if you’re currently reading “Green Lantern: New Guardians,” then you have an idea what is going on. That said, this issue does seem like needless decompression and an excuse to get Booster Gold and Blue Beetle in the same issue together, and all for a standard round of misunderstanding fisticuffs.

What makes this issue enjoyable is the art. Ig Guara has grown a good bit as an artist since the first arc of this book. His lines are crisp and well defined. The over all look of the book is a little “cartoony”, but that works well for a character like Jaime. Guara’s sequencing makes the story easy to follow and the action dynamic. Nothing gets lost in translation.

If there is a personal issue I have with “Blue Beetle,” it is the recent removal of Jaime from his culture. To reiterate from last issue’s review, Jaime doesn’t need to be in New York City. That place has enough characters in any comic book universe. Change is of course something needed to keep a story going, but the plot is soon taking the book into outer space. That’s a big change, right?  Jaime is from Texas,  a setting that doesn’t get a lot of love in comic book universes. It was a nice change of pace to see it represented in “Blue Beetle.” (Soap box over.)

So what is the overall impression here? To sum it all up, this feels like a 90’s comic. The art is good, the writing lackluster. There’s some promise, and maybe once the story catches up to “New Guardians” things will get more interesting. I have a lot of love for any incarntion of Blue Beetle, but I will be cashing in on that promise with the next issue. Impress people, Team Beetle! Make this title the reason Jaime should be hyped up with all these recent multimedia appearances. Then bring Jaime back home to kick ass, Texas style.

Lover. Poet. Former educator. Now that he is here, he cannot be stopped. Matt's love affair with comics started with the Batman and X-Men animated series in the 90's and shows no sign of stopping. When not writing for Multiversity Comics, he enjoys Warhammer 40K, roleplaying games, reading just about anything, and cooking. Matt lives in San Antonio with his girlfriend and cat.