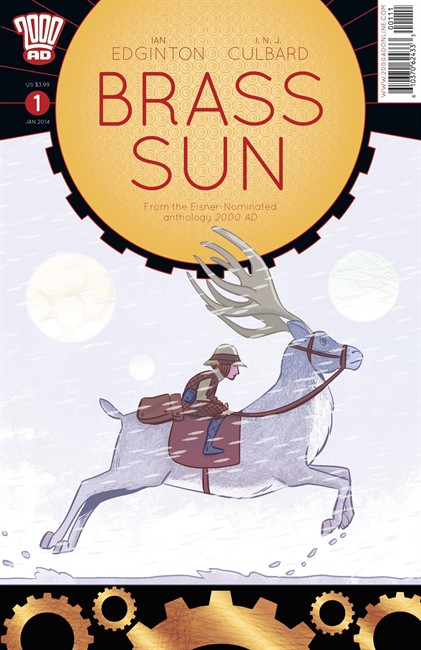 Straight out of the pages of “2000 AD”, “Brass Sun” sheds its own light in this remounted miniseries. 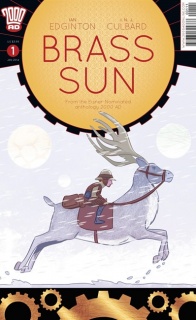 The Orrery is a clockwork solar system where planets whirl on vast metal arms and the sun of cogs is worshipped as a god. But the sun is dying, the planets are freezing one by one, and cults burn as heretics those who warn of the danger. To save her home, young Wren knows she must first escape it and find the key to restart the sun. An incredible new SF-clockpunk series from the bestselling artist of New Deadwardians and the writer of Scarlet Traces.

Clockpunk? Is that even a thing? If it is, “Brass Sun” would certainly fit into it. This is literally a clockwork universe – and like even the best clocks, it is fallible. Wren’s grandfather has taught her about the peril facing their planet; but she soon finds herself alone, on a quest to discover the true nature of her universe.

It’s a dizzying concept for a lone adventurer to explore, and reading “Brass Sun” is an overwhelming experience. To set us up, we get some exposition straight from the mouths of this planet’s authorities, with Edgington’s florid dialogue setting the dystopian tone. Meanwhile, I.N.J. Culbard’s art – which got across so much understated charm to “The New Deadwardians” – goes all-out surreal, channeling a Franco-Belgian style that’s all clear lines and big settings. Executions are performed on a bridge spanning an immense abyss; and several times we teeter on the edge of this abyss, treated to a terrifying view of this unusual city.

This constant, vertiginous feeling of scale acts in neat counterpoint to the central concept; you wouldn’t expect something as reliant on tiny parts as an orrery to be possessed of such wide skylines, but it’s as vast to its inhabitants as our solar system is to us. The rich colours make the views all the more compelling – golds and blues alternate with snowstorm pastels, adding even more punch to Culbard’s confident lines.

The element of terror certainly isn’t absent from this story; this is a plot that gets brutal fast. The kind of violent, hope-destroying events that you would expect to occur in the penultimate moments of a miniseries happen right in the middle of this issue, making for some bleak moments indeed. Wren is really put through the wringer, finding herself in a situation that’s a complete 180 from the first scenes of the comic. It’s a bold move, but also a smart one; instead of gradually revealing Wren and her grandfather’s initial predicament, the situation is immediately pushed to its defining moment.

Appropriately enough, Culbard’s characterizations are at their best when it comes to the stoic, deadpan, and cruel; the withering glares of a chief inquisitor are worth the price of admission by themselves. Wren, meanwhile, is a little harder to engage with for having a more guarded demeanor, but the pathos of her situation is tangible without too much emoting on her part. She does, in any case, come across as a discerning individual, with her wariness and feelings of doubt coming across clearly in the final scene.

We end the issue on a fantastic sight, the mechanical details of which hint at greater revelations to come. But then, with its terrifying vistas and mind-bending concept, this issue is a minor revelation unto itself. It’s always a delight to see a unique idea executed with flair, and now that it’s accessible on this side of the pond, “Brass Sun” should earn its fair share of worshippers.