Marvel’s second team-up book at the moment (after “Avenging Spider-Man”) sees Steve Rogers teaming up with Tony Stark for the continued adventures of their rad bromance. I’m ready to dance the night away, but are they?

Note: there is no dancing involved in this comic or review. 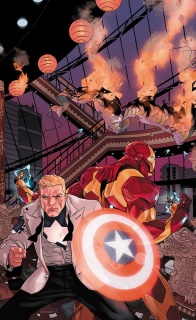 – Captain America and Iron Man head to Madripoor for a technology expo! What could possibly go wrong? Everything! That’s what!
– Especially when Batroc’s Brigade shows up and a technological nightmare threatens to brings the world to its knees!

I heard a joke once. It started like this: two superheroes walk into a weapons convention. The first one says, “Hey, do you think we’ll get caught?” to which the other one says, “Look out! A frenchman is about to kick you in the face!” It’s admittedly not the greatest joke I ever heard, but it gets the point across.

In many ways, that’s how this issue can be summed up. Team-up books are fun, but they’re tricky endeavors. We’re already reading about the adventures of these heroes in other titles elsewhere, and we’re even reading about what it’s like when they work together in other titles elsewhere, so it’s the job of this title here to deliver something fresh and exciting. That’s the dangerous path that a book like this (and on that same line, “Avenging Spider-Man”) walks; where we give another title the benefit of the doubt to entertain us, this one has to work a bit harder for the money it — and gosh darn it, it better treat us right.

So the question is, does “Captain America And…” do that? The answer is, unfortunately, yes and no. Here’s why:

Yes: Cullen Bunn is a reasonably fresh-faced creator to the Marvel universe, having only written a twelve-issue mini, a few one-shots and a co-writer gig here and a fill-in arc there. This is Bunn’s first truly ongoing book, in which he has just about as much creative freedom as you’d expect on a title like this — meaning, he can take the characters he wants for a team-up and do a side-canon story on his own terms. That’s what this issue is: Tony and Steve go to a weapons convention and have an adventure together in true superhero style. There’s a girl, there’s betrayal, there’s a leaping super villain who manages to be more difficult than you’d expect and there’s a twist resulting in defeated heroes. It is a classic archetypal superhero story, and it does its job well.

The real above and beyond moments of the issue, though, are the little details. It’s a deceptively creative little jaunt, with Bunn flexing his Ellis-esque sci-fi muscles well and delivering quaint little character moments. Given that half the book is set in an espionage setting, the dialogue between Steve and Tony is crucial to moving the book along. A “rad bromance” joke was made earlier, but Bunn uses that for the better here, with Steve playing the soldier and Tony playing the billionaire resulting in all the humorous clashing you’d expect. More than anything, Bunn seems to be channeling the film versions of the characters with this story, but given that this book is designed for shorter stories that you can pick-up on a whim that seems like it’ll be for the benefit more than anything.

However, then there is the No: Unfortunately, despite these positives, there’s nothing here that seemingly distinguishes this book from any other in a way that makes this a more worthy purchase. It’s a tough criticism to lob out, but in a world where Marvel double ships most of their titles and it’s getting impossible to read every book you want, sacrifices must be made. When holding this Captain America story up to other current Cap stories and when holding this Iron Man story to other current Iron Man stories, it’s tough to say yes to this book over any other. Unless you’re the world’s biggest Batroc fan, there’s just not enough in the book to really distinguish it on the stands; at least, not more than Bunn’s work elsewhere, like “Venom” (or “The Sixth Gun”).

Truth be told, if the words on the cover “ONE NIGHT IN MADRIPOOR!” meant that this was a one-shot, it may have been that much better. Yet, as a story that’s going to continue into the next issue, it’s just not enough: not enough story, not enough tension, not enough pull. Bunn is still a strong writer, and definitely one to follow through the Marvel universe and beyond, but this issue isn’t the best show of why.

Then again, that’s really just from a story perspective. A lot of books can be judged based on what kind of plot they bring to the table, but given the medium these stories are told in the art is just as crucial. Luckily for us, this issue sees Barry Kitson on art duties, and Kitson is a champ and a half. Kitson’s art is made for bigger things, but with the convention setting he manages to pull out a few show-stopping pages with the full scope of the convention illustrated around the wandering Stark and Rogers. There are some inventive items hidden all around the book, whether it be a new weapon or a robot being sold off in an auction, and the book is densely populated with realized characters all throughout the background (none of which, thankfully, are phoned in like in some other “big” books of the here and now). Add to that the final fight scene against Batroc and his gang and you’ve got a very sharp looking book from a talented and definitely under-appreciated artist.

It’s a tough call, in the end. “Captain America and…” is a book that you’d want to like more, and while it certainly has it’s form of charm it’s just tough to value this book more than “Captain America,” “Invincible Iron Man” or even “The Avengers.” It’s a nice distraction from the rest of the world and even a nice deviation from the world of “Avengers vs X-Men” and all that no more Avengers stuff, but even so there’s only so many comics you can buy in a given week. Sometimes when a book is good but not great, you just have to flip a coin (or wait for trade).