Unfortunately timed to debut before the “Marvel NOW!” initiative takes center stage in a few months, “Captain Marvel” #1 was one of the best debut issues of the year, and set up the series as one to watch going forward, whether or not it will be part of the new initiative. 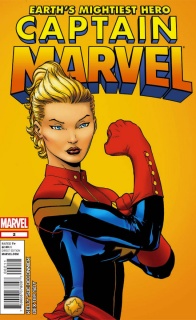 Captain Marvel can’t walk away from a challenge from her past!! Who’s the better pilot? – Introducing the THE BANSHEE SQUADRON! – Avenger Time Travel Protocols: Engage!

Two new, non Marvel NOW!, books have come out in the past month that have focused on Avengers; specifically about their lives when they aren’t acting as Avengers. Both “Hawkeye” and “Captain Marvel” have been revelatory, pairing husband and wife Matt Fraction and Kelly Sue DeConnick with talented and unique artists to bring their visions of superhero domesticity to life. Where “Hawkeye” is about an average guy who happens to be in the Avengers, “Captain Marvel” is about someone who is anything but average. Where as David Aja was tasked with making dogs, pizza, and bros look visually exciting, Dexter Soy is given the task of bringing the experience of being an almost unfathomably powerful hero, set in an anything but ordinary world, seem like just another day being Carol Danvers.

Soy does this by drawing every character as dramatically as he draws Carol, and so while she may be wearing a brightly colored costume, when she stands toe to toe with soldiers, there isn’t such a strong delineation of power between them. Each person is given personality and dignity by his hand, and so even though 5 female soldiers are introduced under the cover of night, it is clear who is who in each panel, as none is drawn as “generic soldier.” Soy’s style has one foot in the painted and one foot in the digital, or so it appears to my eye (I don’t know what his process is), and his blend of the traditional and the unconventional make for a book that doesn’t really look like anything else on the shelves right now.

It doesn’t hurt matters that DeConnick is writing this book in a way that doesn’t give it an easy analogue to anything else coming out right now either. The book is, in many ways, a feminist superhero book, and I mean that in the best possible way. In comics, there tends to be an unwritten rule that, besides a few outliers, the female characters are weaker members of a super-family (Spider-Girl, She-Hulk, Batgirl/Batwoman, Supergirl). And while it is true that Ms. Marvel was initially exactly that, for the past thirty years Carol has been the Marvel hero, not one of the Marvels. So even letting her ascend to the rank of Captain, instead of just being called Ms., is a feminist statement (a somewhat ironic one, due to the etymology of Ms.). But also populating the book with strong female characters doing stereotypically male jobs (like piloting, serving in the military and superheroics) reminds people that even though many creators still seem to believe so, gender roles aren’t stuck in the Silver Age.

And, to use a term that might need defending, this is feminism that goes down easy. There aren’t grand speeches about how women can do anything men can do. Instead, like all the best comics, that is shown, never said. For people out there who still don’t self-identify as feminists (and, for real, shame on you), they might be more willing to pick up a book where they don’t feel an agenda is being pushed, even if said agenda is common sense decency in action. Comics readers aren’t always the most progressive thinkers out there, and so this may be a way for DeConnick to bring real issues to light in a slightly covert way. I wish this didn’t have to be the case, but sadly it is, and good for DeConnick for addressing important issues without sacrificing visual flare or great storytelling.

But luckily, one Silver Age trope managed to remain, and that is time travel. Time travel, to some, is an easy crutch to lean on in case you can’t find an interesting story in modern times. To others, and I fall into this category, it is a way of meeting limitless possibilities and telling stories that just wouldn’t be possible, or as interesting if it was employed. And by allowing Danvers to play in the sandbox with the Mercury 13 (a topic that DeConnick was passionate about when she was a guest on The Hour Cosmic), DeConnick has positioned someone who can literally fly through space with people trying to do just that.

In addition, as she says in this issue, “Time travel is not a Carol Danvers problem.” By throwing a character who isn’t exactly well suited for time travel 70 years into the past, there is far more drama and intrigue than if it was the story of someone who feels comfortable being careful not to “step on any butterflies.” One of the charming aspects of the Avengers has always been the wide scope of membership, and so while there may be time travel protocols on the books, most Avengers would never need to know them, something Carol learns the hard way here. Without a way back to the modern era, this book appears to be set in the past for the time being which, again, continues to distinguish itself from most of the other books on the shelves.