I don’t know about the rest of you guys, but the only comic I was really excited for this week was the final issue for this arc of “Casanova.” One of the best books currently being published (if not the best), it was a pretty big moment for Casanova fans as the arc came to-

Well, I’m getting ahead of myself a bit. First, the solicit information, then the review: 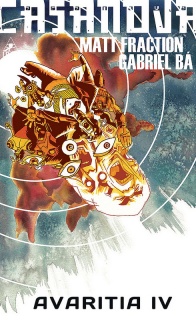 One of the most critically acclaimed series of the year comes to its catastrophic conclusion. CASANOVA: AVARITIA #4 answers every question (almost), solves every riddle (kind of), and explains absolutely everything you ever wanted to know about the world of CASANOVA (in a way). Casanova Quinn, hated on all sides by tyrant and hero alike, must flee from time and space, aim one batch of enemies at the other, kill everybody and save everything simultaneously. Don’t be afraid: you are an apocalypse dreaming of butterflies + the first part of reincarnation is dying…

This is it. The end of the first act of “Casanova.” The past two volumes, ‘Luxuria’ and ‘Gula’ both fed into this third arc with what felt like set-up stories respectively, but ‘Avaritia’ – an arc titled after the latin term for greed of the Seven Deadly Sins – ups the ante and brings everything together in an anarchy-fueled story of destruction, alternate universes, love, music and chaos as only Fraction and the Twins can do. It’s sheer madness, but in the best of possible ways.

So what is this issue about then? Well, for one thing it’s about closure. For fans of “Casanova” who began reading the series when it debuted in 2006 or when it came back in living color in 2010, there have been several dangling plot threads that have been nagging at the back of readers heads since. This issue ultimately shuts quite a few doors, but in the same vein that LOST would “shut” a “door” when a season ended (as ultimately the future is still wide open, for everyone). On the same thread, this issue is also on some level about deliverance, giving fans of the book scenes we’ve all been hoping to see, like a showdown between Casanova and Xeno alongside the revenge of Sabine Seychelle. It’s basically an orgy of everything a fan could seemingly ask for when given the option of pseudo-wrapping up several threads, and it’s quite a wonder of an endeavor to behold.

Most importantly, though, this issue is about reminding us what can be done when comic creators truly love their job. Not to reference any one thing in particular, but some books have resorted to placating their readers with a specific set of beats along expectations we have for comics: a fight scene here, a revelation and twist there, characters basically walking down obvious paths towards inevitable conclusions you can see months in advance due to how obvious it all is (and/or solicit information). “Casanova” eschews all of this, though, traveling through it’s own unpredictable course in multiple direction all at once along a path that only Fraction, Ba and Moon can be trusted to chart. This book has everything: big moments, satisfying pay-offs, gut-wrenching final moments, witty quips and innovative artwork, all flying along at a breakneck pace that is entirely relentless. There’s always been a heavy musical influence on “Casanova”, but with ‘Avaritia’ it’s never been more apparent about how musical the book really is, constantly switching grooves like free-form jazz or acid rock.

“Casanova” isn’t just a book that came out this week for you read; “Casanova” is a book that came out this week for you to devour, absorb, think upon, dissect and enjoy. The book pretty much demands multiple reads, with each take offering up something new — like a great song you listen to over and over, noticing guitar riffs mixed quietly in the background or a particular drum fill that really excites you. Fraction is behind quite a few Marvel series at the moment (four ongoings and part five of the “AvX” event braintrust), but none of his Marvel work is seemingly broadcast on the same frequency as “Casanova.” With such a wide cast and with so much going on, it’s impressive to see how much love and attention Fraction gives to every character, to every moment and to every event happening all at once. Nothing is left underdeveloped or pushed out of the way to for something better; it all feeds into itself like an ouroboros of pop-fueled pandemonium. This comic feels like the pure id of Fraction, limitless in scope and entirely open-ended from every perceivable angle.

And good lord, Gabriel Ba is basically perfect. This series has seen Ba playing around with conventions of sequential art quite a bit, apparent right off the bat from the first issue, but this finale really finds Ba nailing the emotional resonance factor of it all, the dial turned up to 11 as the world falls apart.The sequence contained in Chapter 12 (“We Are The Dead”) is particularly moving as we’re given individual moments in time spread out across seven pages and 49 panels, each one full of rich and shifting detail with highly emotive characters that – for anyone who has ever enjoyed “Casanova” even slightly – offers up a rich tapestry of affection on behalf of Ba for the story and all contained within. With bright, popping colors by Cris Peter on top of stellar pencils and inks, Ba has crafted a beautiful comic that stands far and above any other issue I’ve looked at this week.

Honestly, between this and the previous issues of “Casanova: Avaritia,” I can’t remember the last time I was this satisfied by the experience of reading a comic book as I have been from this arc alone. We’re still four volumes away from the absolute finale of “Casanova”, but it’s probably not too early to note that whenever this all ends it’ll be Fraction and the Twin’s definitive masterpiece. This has all been said before (by me, and on this site), but it’s hard to match the sheer amount of creativity and genuine love for the art of comic books as found in “Casanova.” It’s clearly a labor of love with the amount of time spent in bringing the series this far, and as one door seemingly closes it is rather impossible not to be excited for what the future holds with ‘Acedia.’ Suffice it to say, whatever happens will be impossible to ignore.

Final Verdict: 10.0 – Fuck it, I don’t think it’s going to get much better than this for me