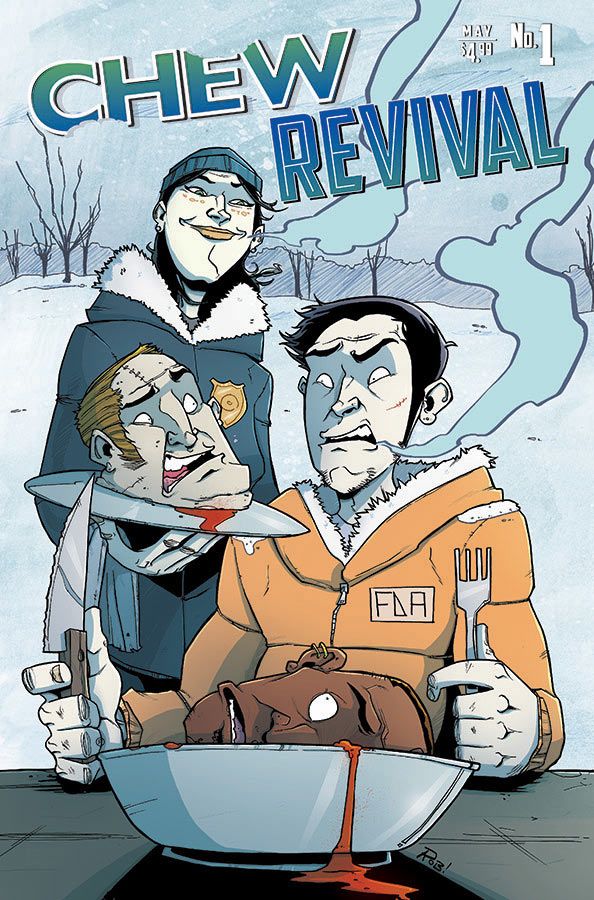 An unlikely pairing makes for a delicious dish with the arrival of the crossover between “Chew” & “Revival.” Read our spoiler-free review below before I go full Gene Shalit on you with the puns and rhymes. 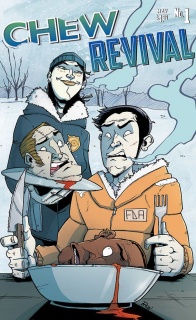 TWO GREAT TASTES THAT TASTE REALLY WEIRD TOGETHER! Tony Chu heads to Wisconsin in two all-new original tales by the creative teams of both critically acclaimed titles! A great jumping-on point for readers who’ve heard how damn good these titles are on their own, and a twisted delight for those already in the know!

Let’s set aside the fact that canon-fiends (and lord knows there are plenty of them in comic book fandom) will be driven nuts by the implications of the “Chew” and “Revival” worlds crossing over in a very matter-of-fact manner. The point isn’t whether a crossover makes sense or fits in to some specific moment in either series’ timelines – though John Layman drops an early joke regarding this in his segment. No, the only thing that matters is whether it’s good or not, because the world is better with another great issue of either (or both) of these two comics on the shelves.

One of the strokes of pure genius in the crossover between “Chew” and “Revival” is the fact that the story brings the characters of “Chew” to Wausau, Wisconsin – and not the other way around. While “Revival” takes place in anything but an “ordinary” world, the characters and the realism of the environments themselves are entirely more grounded than those of the “Chew” world. “Revival” has a sense of humor in its own right, but it’s not bouncing off of the walls with the equal mix of darkness and comedy that “Chew” can lay claim to. So while the crossover flipbook goes right down the middle between story segments, they both take place in Wausau, making the more oddball characters of “Chew” impose their personalities on the more conventional setting.

But the exceedingly normal rural settings around the real life city of Wausau allows the strange detective Tony Chu and his cyborg partner John Colby to react in some very fun ways. After all, Wausau may be an entirely regular midwestern city, yet we get to see Chu & Co. experience its hokey and simple charms, like polka music, dive bars, and dilapidated barns in abandoned fields. While Tony Chu’s demeanor often teeters on the brink of comedic madness, both Layman and Seeley do a magnificent job of applying his personality to a setting that is ripe for comedy at the expense of the mundane while finding room for the same sorts of grossout situations that Chu often finds himself in. While both stories put Chu in the world of “Revival”, each creative team handles there respective entries equally well. They’re both extensions of the same initial plot device that brought Tony there – a violent incident at an inauspicious Wausau restaurant. The “Chew” team segment feels amazingly like an episode of “Chew” on its own, with a steady dose of dark humor and an ending with a hell of a punchline. The “Revival” segment, on the other hand, feels like a “Chew” story invaded “Revival”, which proves to be an equally valid approach to telling a quality comic story.

It certainly doesn’t hurt that we get to enjoy art from two of the best in the business in Mike Norton and Rob Guillory. Seeing Tony Chu render Wausau, Wisconsin using his trademark “easter egg” and joke-filled environments is a delight. “Revival” has a definite dark side to it to begin with, but Guillory’s art really demonstrates how easily Wausau can be utilized for comedic purposes. Guillory has an exaggerated style that plays up the grungier, grosser aspects of the “Chew” universe. Unsurprisingly, that style feels right ay home in this setting. His particular take on the various “Revival” characters is fun in each and every case, as well.

Likewise, the sort of gross-out supernatural foodstuff that Mike Norton is asked to draw couldn’t be more different than the supernatural elements that “Revival” regularly carries with it, yet he incorporates these elements into the story easily. The resulting crossover may not make sense to the most sticky of sticklers, but the differing art styles play off of one another perfectly well. Beyond that, Norton just continues to have some of the most handsome and clean art on the shelves today. It’s just pretty to look at.

While we know Tim Seeley and Mike Norton to be good-humored guys, they let loose even more on this issue, and it really shows through in the art. The world of “Revival” becomes more playful and comical with these “outsiders” in it, and Mike Norton takes a few opportunities to get just as playful with his renderings. “Chew” and “Revival” aren’t even the only Image Comics targets of the crossover – Seeley and Norton get in a few additional delightful visual jokes and homages in their half of the issue.

All-in-all, the “Chew” “Revival” crossover went just as well as you’d hope it would. Nobody involved had to worry too much about what they could and couldn’t do with one anothers’ toys. You get an honest sense that everyone involved was only worried about one thing – having lots of fun in the spirit of creator-owned comics.