Being an artist who draws comics is not an easy job at all. We all know this, even as we toss around insults towards artists who we don’t like for one reason or another (like an inability to draw feet, or a weird obsession with drawing people grimacing). What makes the task so tough is that the art needs to do two things at the same time: look nice and tell a story. Some people are more adept to one or the other, and the work can suffer if the ratio is too far off.

And in “Chin Music” #1, the ratio is almost insurmountably skewed. This is a beautiful book, but after reading it, I have almost no fucking clue as to what was going on. 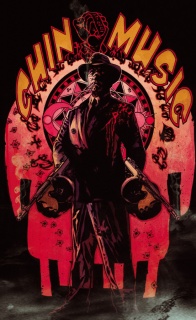 Shaw is a man on the run and lost in time. Fleeing ancient enemies, Shaw finds himself in prohibition-era Chicago surrounded by gangers and demons alike and caught between law enforcement and the local supernatural underground. CHIN MUSIC is a tale of mysticism and violence like nothing you’ve experienced before.

The book begins with a gorgeous and engrossing wordless sequence, where we see a middle aged man carving some sort of design into a bullet. This sequence is full of classic Tony Harris painted sequential art – lots of interesting panel construction and meticulous attention to detail. The sequence builds and builds, to include a candle, a marked-up desk, and just about every classic noir element you could ask for. The conclusion to this sequence is left purposefully vague, which works remarkably well.

Once the comic eschews silence for dialogue, the wheels start to come off a bit. Part of this is due to Harris making some of the characters look quite similar to each other and wear similar clothes. But Steve Niles deserves some of the blame here too – the book forces us to identify and keep straight three characters whose names we either never get or get much later and have distinguishing features like hair covered. I had to re-read this issue three times just to try and get the characters/timeline straight, and that simply isn’t a good sign.

And this is not a knock on comics that require/demand/suggest repeat reading. There is a real special joy in pulling out a great comic and re-reading the run, learning new elements and noticing new twists each turn through the pages. This isn’t that.

This is a poorly constructed, lazily written comic with some real questionable art choices. Many times when writing reviews, it can be easy to lean into either the writer or the artist for their poor execution. That isn’t the case here, as the book is so perfectly intertwined between the two creators that the only thing that can be done is to blame both for this mess.

The shame of the matter is that Harris does some really nice work here when he isn’t having to move the story forward. Each panel looks gorgeous, and he manages to elicit a lot of emotion from things like barely alive skeletons and faces covered except for eyes. But things that should be abundantly clear are left totally ignored by the script and art. For instance, it appears that the “Meddler” is in Egypt when he is involved in the event that leaves him wounded, and we see him crawling away. When we see him next, he appears to be in the United States, but we can’t be sure. Ness, the police officer, speaks English and has a US badge; the sign for the hospital is in English, and the final scene appears to be about American organized crime. So wait, Egypt? Did the Meddler crawl across Africa, Europe, Asia, the Bering Straight, Alaska, and down to the Lower 48? Huh?

This gets magnified because so little actually happens in this issue. There are 15 pages of this 22 page comic where there is no more than one word bubble (word bubble defined by its stem – so if a character says “Brian (new bubble) why do you count this shit?,” that is one word bubble). The action shown in these relatively silent pages isn’t exactly complex or telling. It is a beautiful comic to hang out in, but a really frustrating one to have anything intelligent to say about it.

This book instantly made me think of “Batman and Robin” #18, or any other of the dozens of truly great silent comics. Those books have plots that can easily be followed and tug at emotions, or can be funny, or can do anything a comic overflowing with dialogue can do. That isn’t the case here, sadly. What is here is a fundamentally flawed comic that brims with potential, and sees fit to squander it.

Note: Putting together this review, I re-read the solicitation for this issue. It is posted above, but I want to re-post it here:

Shaw is a man on the run and lost in time. Fleeing ancient enemies, Shaw finds himself in prohibition-era Chicago surrounded by gangers and demons alike and caught between law enforcement and the local supernatural underground. CHIN MUSIC is a tale of mysticism and violence like nothing you’ve experienced before.

So, the one dude’s name is Shaw, the setting is Chicago, and time travel is a part of it. I understand this issue more now, but am angry that it took reading the solicit to do so.

Final Verdict: 4.6 – Save some scratch and buy some Harris original art