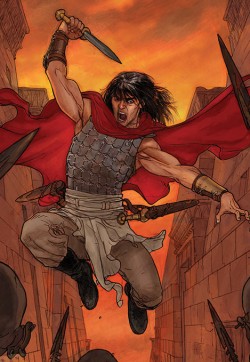 After a solid start, everyone’s favorite barbarian takes a bad stumble in “Conan The Avenger” #2. 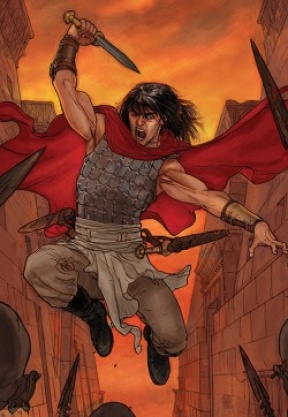 When a case of mistaken identity leaves Conan accused of witchcraft, the Cimmerian finds himself the target of the powerful and deadly Agara—witch hunter of Kush! But as the warrior and the wizard quarrel, an evil force plots to eliminate them both!

Since acquiring the “Conan” license, Dark Horse has turned the property into a popular and critical success by employing talented creators that aren’t afraid to expand the Hyborian world in new directions while remaining true to the original vision of Robert E. Howard. After the conclusion of the previous acclaimed series, the first issue of “Conan the Avenger” seemed poised to continue the trend of high quality adventure. It wasn’t a perfect start, however, and the flaws found in the first issue seem to have unfortunately become larger and more apparent in the latest installment.

Picking up seconds after the first issue, Conan is facing off with the local witch hunter who has accused the barbarian of bringing evil magic to El Sebbeth. Conan has no idea what is going on, but isn’t one to take accusations lightly, and the pair immediately begin fighting. Unbeknownst to them, a third party observer wants them both dead, and uses magic to send a horde of zombies – the pop culture phenomenon of 2011 – after Conan and his adversary. They immediately team up like a Hyborian Murtaugh and Riggs to take on the zombie threat, and resort to the ancient tactic of running away. They end up at the local smelters compound, where nobody believes that a witch could be in Kush. Conan wastes no time starting another fight, with fire this time, and runs off just as the zombies catch up. They find themselves trapped in a local graveyard, where Conan must destroy a magic cauldron to stop the ever growing number of zombies.

In the first issue of “Conan The Avenger”, writer Fred Van Lente was successful in maintaining the delicate balance between fantasy action, grounded character emotion, and world building, all while incorporating the original Howard prose. In the follow-up issue the balance seems to have gotten away from Van Lente, to the detriment of the pacing and tone. The narration, from a mostly unseen third party, comes and goes at odd times, and only really contributes to the story on the first couple of pages. The dialogue has become much more chunky, for lack of a better description, and everyone talks with the same type of short, angry bursts. It also seems strange that a skilled and experienced warrior like Conan would be so quick to team up with his would-be killer, ‘enemy-of-my-enemy-is-my-friend’ theory of battle notwithstanding.

The book has not become a disaster overnight, and Van Lente makes sure there are still plenty of things to enjoy. The partnership, a quick as it occurred, is a welcome subversion of the popular image of Conan as a sullen solitary warrior. The ghostly apparition of Conan’s deceased lover adds a nice air of mystery to the issue. This is a world where magic seems to exist, so it raises the question: is her appearance the result of dark forces, or is Conan losing his mind? Conan regains his armor in this issue, but Van Lente makes it clear that the character himself is aware that he is far from back to normal.

The fact that zombies appear in this issue is a total benefit to artist Brian Ching, who has a natural knack for the dark and macabre. These are classic zombies and Ching is not out to reinvent the undead wheel, but they will surely please classic horror fans. It does feel as though the creators are aware that “The Walking Dead” has a monopoly on the zombie market, so Ching doesn’t waste space trying to impress the audience with gruesome zombie deaths. The actions scenes, which are the bulk of issue, are very clear despite the muted color palate, making everyone look kind of grey. Ching’s lines are very sharp and angular, making everything in this world seem potentially dangerous.

Ching’s version of Conan is different from classic portrayals, as the character is much slimmer. In the first issue, it made Conan look like a warrior who possessed great strength, but was still nimble and agile. His fights are won with actual skill, not just blunt force trauma. There are moments in this issue, however, where Conan looks downright emaciated. The character obviously isn’t taking the best care of himself, but the audience still has to believe he has enough energy to lift a sword. The issue ends with a very graphic scene, sure to put off some readers; if the intention is to shock and upset, Ching definitely accomplishes that, but it is easily the most grotesque thing seen in the series thus far.

“Conan the Avenger” is a step backwards from the stellar first issue. The writing feels too loyal to the original text at times and less so at others, and the narration actually interferes with the pacing of the story, while visually Conan goes from svelte to scrawny multiple times. There are still good things in the issue, especially Conan’s internal struggle with his own sanity, but it feels like the creators need just a bit more time to get used to this world.