Daredevil moves to the west coast in this fresh start for Marvel’s Man Without Fear! Check out our review to see if this is just a case of reboot fever, or if Samnee and Waid truly are fearless. 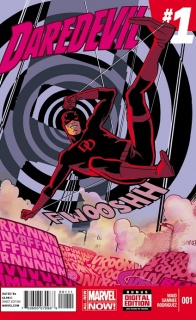 Join Marvel’s fearless hero as he begins his most awe-inspiring adventure yet in the sunny city of San Francisco! Gifted with an imperceptible radar sense and a passion for justice, blind lawyer Matt Murdock—a.k.a. DAREDEVIL—protects the Golden City’s streets from all manner of evil. But big changes are in store for Matt Murdock as old haunts and familiar faces rise to give the devil his due. Hold on tight, because here comes Daredevil…the Man Without Fear!

I tell ya, these kids no respect today with the reboots. Back in my day, numbers mattered. A #1 was a NUMBER ONE! It meant earth-shattering changes to a character or that Scott Lobdell was the new writer. Nowadays you throw it around left and right and who even cares?!

Well hypothetical reader, who in my head sounds like Bruce Dern, you’re half-right. The new “Daredevil” from Mark Waid and Chris Samnee is hardly a relaunch. Pretty much everything we enjoyed from the past volume of “Man Without Fear” has survived the trek to San Fran. For example, Chris Samnee’s art, which has instantly become iconic in relation to Matt Murdock, is still just as breathtaking here even to a literal extent.

The new volume of “Daredevil” finds Murdock well into his new career as a consultant for the San Francisco police and from there the action does not let up. As the stakes ramp up, as they are wont to do under Waid’s pen, Samnee’s art matches up the pace with panels swapping perspectives seemingly every second. This chase should be child’s play for Matt Murdock but, due to the change in location, it becomes one of the most tension-fraught sequences in recent Daredevil memory. Geographically, San Fran is hella different than New York. There’s warmer weather, people wearing Google Glass, and most important of all, the lack of a grid system or tightly spaced buildings. For a “Man Without Fear”, Daredevil seemed to have dug himself into a groove. Leaping around New York, it became obvious that he would always stick the landing on the flagpole. It was his city; he knew it like the back of his hand.

San Francisco though? San Francisco’s got streets that aren’t numbered and reaching out for a ledge will only get you splattered across the sidewalk. For the last fifty years Murdock has been leaping across New York and, as a result, it’s become old hat. Now, in a completely new setting, the idea of Murdock as a genuine daredevil finally comes through in revelatory fashion. We’ve been so accustomed to the idea of him swinging around rooftops we forgot just how insane it is that he’s flying blind. But with a new setting, Samnee and Waid are reminding readers that this isn’t just a superhero book; it’s a parkour thrill ride. There’s finally a sense of consequence to Daredevil’s actions and the idea of him missing a ledge and breaking his legs has become much more conceivable. It’s this shock in the arm that truly revitalizes “Daredevil” and creates a clean break between the East Coast and West coast volumes.

That said, you can still expect the same quality from the plot. Though the chase that the majority of this issue is built out of contains some exciting twists and turns, we’re still treated to some nice character moments from Matt and Kirsten as well as a newcomer. Though it wouldn’t be a Waid title without some grand plan at the heart of things. Some people, myself included, found “Daredevil” at its most enthralling when there was some conspiracy headed towards taking down Murdock and though we’re not given something as concrete as The Return of Bullseye, there’s still definitely something lurking underneath the story. As I said before, “Daredevil” #1 begins in media res with Daredevil relatively established in San Fran. The story of how he came to set himself up there is definitely going to have consequences in the foreseeable future.

If there’s anything to be taken from this “reboot”, it’s consequences. Aside from the mini-mystery I talked a little about earlier, “Daredevil” is finally feeling like a true “Man Without Fear” simply by giving us, the readers, something to fear. The fact that we’re seeing a Murdock who genuinely knows next-to-nothing about the environment around doesn’t allow us to sit back and just think “Yeah, of course you’re going to land it.” The shift to San Francisco, aside from giving Samnee a ton of opportunity to draw some incredibly stellar backgrounds, also revitalizes “Daredevil” in ways we didn’t even realize it needed.

Final Verdict: 8.7 – Buy. This is the “Daredevil” you loved before but with a dangerous twist. Also an excellent jumping on point for new readers.