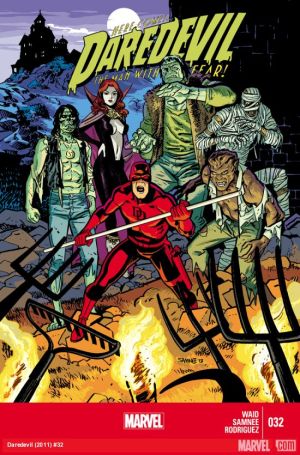 The Man Without Fear takes an entertaining, and festive, detour in “Daredevil” #32. 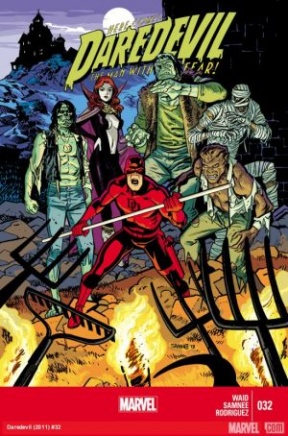 The Man Without Fear–trapped in a nightmare situation! Something final is building in Daredevil’s life–and building fast!

The holiday special is a rarity in comic books, as the threat of unexpected delays or last minute editorial tinkering could derail any festive setting, and once collected in the inevitable trade the issue has the potential to seem completely irrelevant. As a result, readers have thankfully been spared from “Punisher Saves Christmas” and “A Very Iron Man Valentine’s Day”, but if there is one creative team that can make a holiday themed issue work, its Mark Waid and Chris Samnee. Their run on “Daredevil” has been full of fun and entertaining moments, so it makes sense when the cast of The Munsters shows up in issue #32.

Picking right up from the previous issue’s shocking cliffhanger, Matt enters his house to find Foggy Nelson seemingly hanging from the ceiling, as the villainous Jester watches the scene unfold. Matt, is not immediately lured in by the trap, much to the Jester’s chagrin, and easily dispatches the henchmen sent to finish him off. The Jester’s furious and, acting in cahoots with the Sons of the Serpent, immediately ratchets up his plan to create chaos throughout New York City. After Foggy helps him researched the origins of the Serpent, Matt seeks some advice from a magical friend, who sends him to meet a contact in the back hills of Kentucky. But even when he’s away from Hell’s Kitchen, Daredevil is never far from action, and he soon finds himself between a group of pitchfork wielding townsfolk and group of horror-themed outcasts.

Mark Waid sure knows how to milk a cliffhanger for all it’s worth. When the issue begins, he teases the reader with the possibility of Foggy’s demise, while allowing the previously unseen Jester cackle in his perceived moment of triumph over Daredevil. One of the best things about Waid’s stories is his firm grasp of the advantages and limitations of Matt’s powers. He knows that the body hanging from his ceiling is a fake instantly due to the smell, sparing the reader of a few pages of melodrama. The consistency with which Waid utilizes Matt’s powers makes him one of the most believable superheroes and makes his world feel real, as it abides by the same set of rules. Waid also specializes in using the limitations of Matt’s powers for comic effect, such as when he encounters the band of supernatural outcast and his radar sense only identifies them as people, not a vampire, wolfman, and a mummy.

Although much of the issue revolves around Daredevil’s search for the Sons of the Serpent, there are plenty of detours and additional plot details to make the book feel incredibly full. In writing “Daredevil”, Waid has demonstrated his skilled ability to weave other Marvel characters into the issues in a very organic way. Spider-Man, Black Widow, Iron Man, and even the cosmically powered Silver-Surfer have made appearances, and in this issue Doctor Strange shows up to lend his support. Although he only appears for a couple of pages, Waid makes the reader instantly aware of Strange’s strong force of presence among the super-powered set. The fact that he gets the jump on Daredevil is the perfect way to demonstrate his abilities, and Strange’s brief appearance makes the character very intriguing.

There are a lot of characters making their first appearances in “Daredevil” #32, and artist Chris Samnee brings them all to life with his distinctive and entertaining style. The Jester is the focus of the first few pages and Samnee makes the character’s face twist and contort in ways that shows the character’s true menace underneath the campy costume. Comparisons to the Joker are inevitable, but the way Samnee renders the angry outburst of the Jester set him apart of the gleefully violent moods of Clown Prince of Crime. When it comes to Samnee’s version of Doctor Strange, he adheres to the traditional model of the character, helping the reader easily identify him, while staging the scene is a way that is still visually interesting. One panel which particular features a silhouette of Daredevil and a levitating Strange is particular striking.

Once the story travels to the backwoods of Kentucky, the book begins to resemble a classic horror film and Samnee is sure to include several visual nods to the genre. The town is first identified by a menacing bolt of lightning which illuminates an old sign in front of a large ominous building straight out of Frankenstein, and soon there’s a whole mob of villagers holding pitchforks and torches. When the so-called “monsters” appear, they are rendered in such a way that their supernatural nature is very identifiable, while also keeping with the look of the rest of the book. Under Samnee’s hand, the appearance of a vampire, wolfman, mummy, and Frankenstein’s monster is not even a little jarring or out of place within the “Daredevil” world they have crafted.

Every issue of “Daredevil” from Mark Waid and Chris Samnee feels like it has the same amount of plot, action, and excitement that is normally found in a three issue arc of most other series. They continually buck the trends of decompression and gritty realism found in many comics, and still craft stories that are entertaining, fun, and very engrossing while remaining true to the character. “Daredevil” #32 is a rare example of a book that has a fun holiday theme, but will not seem incredibly dated three months from now.

Final Verdict:: 9.0 – Buy. Another great issue from Waid and Samnee. These guys pack so much into one issue, that “Daredevil” gives the reader an enormous amount of bang for your buck.