4 writers and 5 artists tackle 4 forgotten books (and a Deadman story) in this oversized collection of origins, set-ups and, hopefully, some payoffs. 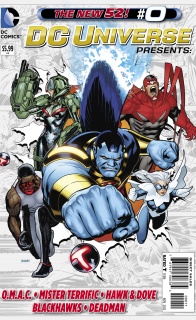 – Five all-new adventures featuring the Blackhawks’ Mother Machine, Hawk and Dove, Mister Terrific and O.M.A.C. in this super-sized issue! – Featuring the beginning of storylines that will play out across the entire New 52!

It is coincidental that this issue is being released at the same time as Marvel is rolling out the latest teasers for its “Point One” issue, as this is, in many ways, the anti-Point One. Instead of teasing future stories (though, to be fair, there is a bit of that), we readers are taken back in time, given new insight and adventures from old friends, all of which don’t mean all that much in the grand scheme of their stories. Of these 5 stories, three end on quasi-cliffhangers, where doors are left open, some with definite plans set forth, others just letting flies in for now. So, let’s dig into each piece:

The O.M.A.C. story is the only one by the creative team that worked on the failed book, with both DiDio and Giffen suiting up for this short prequel. The tongue is pretty firmly in cheek here, as the segment is called “Origins Matter After Cancellation.” This is basically a conversation between Brother Eye and Maxwell Lord, who is still dressed like a Kang/Baron Zemo cosplayer (as he was in “O.M.A.C.”), as they discuss, Bond villain style, how Brother Eye is going to use the O.M.A.C. virus to take over the world, yada yada. This is an extraordinarily exposition heavy story, and while Giffen gives it his all, a satellite and a dude in lavender don’t make for an all that exciting comic, and that is a shame. “O.M.A.C.” was nothing if not an exciting slug fest with lots of bright colors. When the majority of the bright colors come from people welding a Mother Box, you know you’re not in O.M.A.C.land anymore.

Still being teased is the question of who, along with Batman, created Brother Eye, one that also played out a bit in the DiDio co-penned “Justice League International” annual from last month. Sure, this could be an interesting story if done right, but hasn’t its ship basically sailed? O.M.A.C. doesn’t have a place in any ongoing book right now, and I doubt a miniseries would generate enough excitement to justify its existence. So, ultimately, this story is just a reminder that one day, the dude who made Brother Eye might be significant.

Next up is the Mister Terrific tale, penned by “Earth 2” writer James Robinson and artist Tom Derenick. This isn’t so much an origin story (“Mister Terrific” #1 was basically that) as it is a refocusing of who the character is. While many would argue that is was simply the third or fourth worst book DC published as part of the New 52, I firmly believe it was the biggest missed opportunity and the most egregious example of a creator just not getting a character. Writer Eric Wallace turned Michael Holt a smart, proud, tenacious widower and turned him into a race-bating, sexy wisecracker. Clearly, it didn’t work, and he was eschewed to Earth 2 for Robinson to fix him.

And what Robinson does is connect the small glimpse of him in “Earth 2” #2 and who he was in his series. In doing so, Robinson goes back to one of the key elements of the series – that Holt had seen a vision of his grown (dead) son – and turns that into the first move of a game of chess between Holt and Terry Sloan, his Earth 2 counterpart. Robinson blends science with hope, determinism with free will and puts together a damn fine little prologue to Holt’s time on Earth 2. Derenick’s slightly cartoony style is still an improvement on Giancarlo Gugliotta’s confusing and ill-fitting art on the series, and the team manages to put together a Holt story that seems like it is going somewhere, something never said about his inaugural adventures in the New 52.

Let September 2012 go down in history as the month that Rob Liefeld had script or plot credits on four books from DC comics. The most minor of these is his Hawk and Dove story found here. This is, frankly, a really weird story. Here is the Cliff’s Notes version: Hawk and Dove stand around in space while Peace and War, the gods of Order and Chaos, respectively, narrate their story. Which, now, is apparently that Dawn Granger was banging the original Dove, Don Hall, and he got to share his peace power (is that what the kids are calling it nowadays?) with her, and they are sort of both the avatar of Peace? Then Hank dies (apparently from smoke inhalation?), and Dawn sets up a really elaborate plan to meet Hank and be his partner, without revealing that she loved his brother.

Are you following? Because you shouldn’t be, as this is really, really stupid. I know it is easy to pick on Rob Liefeld, but this is as convoluted and unnecessary a retcon as there can be. Marat Mychaels does what he can on art, but this is a doomed story from jump street. It also teases an event where peace will reign over war, and do so sort of ominously, as if the end of war would be a bad thing. I don’t know man, this is really bad.

The Blackhawks story takes place at the same time as the Justice League’s inaugural battle against Darkseid. This is almost a “Damage Control” story, where there is big action happening elsewhere, and this is a secondary or tertiary adventure in the same city. This acts as a quasi-origin for the Blackhawks team, and we’re treated to such adventures as “how Lady Blackhawk lost her eye” or “how Lincoln won the respect of his peers.” If those don’t sound like the type of things you want out of a Blackhawks book, well…I don’t even know.

Tony Bedard, one of DC’s busiest writers, takes on this story, and while there isn’t anything super interesting or revelatory here, still gets a “Mother Machine will return soon – but where? Keep watching!” epilogue. I like how DC doesn’t want to just let these characters die off and not get used, but there has to be a better way than this – teasing stories no one cares about, while wasting art from Carlos Rodriguez. They really want Mother Machine to stick, so the series had some purpose, but its going to take a whole lot more than this

And finally, we have a Deadman story. Presumably, this is because Deadman was the inaugural act for “DC Universe Presents,” and Bedard again writes the story, with art by Scott McDaniel, and this tells the tale of Boston Brand’s first time jumping into someone’s body – the body of the man who shot and killed him. It is a nice piece of writing, and the art has a rough edge to it that fits the story well. It is actually pretty surprising that in his “DC Universe Presents” run, this story wasn’t part of his re-told origin. For that reason, I suppose it makes sense to tell it here.

So, while not the best way to use these characters, the book is successful in keeping these characters alive, and keeping their stories moving forward. We know that Deadman is part of “Justice League Dark,” and Mister Terrific will show up in “Earth 2” again soon, but what of the other three? O.M.A.C. is, most likely, due to join another team book in the future – perhaps a reconstituted “Freedom Fighters,” as I just don’t see him being a Justice League type guy. Hawk and Dove may perhaps return to “Birds of Prey,” or find their way, via Dove’s flame Deadman, into “JLD.” Mother Machine is the odd man out, but given that Bedard wrote it, maybe she’ll be a Blue Beetle villain if that book survives? Stranger things have happened.

More than anything else, my overriding thought while reading this book was: “Wow, I guess really no one cares about “Men of War,” huh?”

Final Verdict: 4.5 – Check out the Mister Terrific story and the art