“DC Universe Presents” kicks off its fourth arc with an odd pairing of two C-list characters who, in the past, have had success more as team players than as solo stars. This book has become a really odd showcase; the initial Deadman arc took a character many know and love and reintroduced him in the New 52. The second arc, reviving Jack Kirby’s “Challengers of the Unknwon,” was a weird detour through reality television satire, before giving way to a Vandal Savage story in the third arc. Presumably, the book was created to give characters a spotlight and, hopefully, a launching pad for their own series. However, that game plan is all but abandoned, and it is now the spot for quirky characters to get their place. Personally, I have no issue with that, but it seems like an odd book to continue with – especially considering the current arc beginning.

Minor spoilers are discussed, so if you don’t want to have some of their motivations revealed, you may want to stop reading. 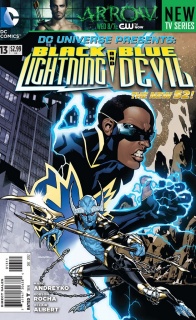 – The New 52 debut of not one, but TWO heroes — Black Lightning and Blue Devil!
– Fan-favorite writer Marc Andreyko kicks off our strangest team up yet with a stunning mystery!
– Can these two VERY different heroes keep it together without killing each other long enough to unlock a new corner of the DC Universe?

This issue brings both Blue Devil and Black Lightning into the New 52, and does so in a fairly conventional way. Dan Cassidy, a stuntman/actor is still the Blue Devil, and Jefferson Pierce is still a teacher who moonlights as Black Lightning. Both are now based in Los Angeles, and find themselves at odds with each other, as new heroes tend to do. The two really don’t have any history together, nor do they have a logical reason to team up. The thought that keeps coming up while reading this book is that it is setting up to be the buddy cop comedy of the New 52.

In a world where crime takes over, and the police can’t stop it all, it is time for some new guys to take charge and shock things up.

He’s Jefferson Pierce, an African American teacher who wants to avenge his father.

They’ll be the ultimate crime-stopping team – if they don’t kill each other first.

You’ll have a devil of a time.

The odd thing is that, as silly as that sounds, it sort of works. The art by Robson Rocha only furthers this idea, as everything is drawn as if it is coming out of an action film. The ladies are dressed just a little too scantily, the big boss is over the top huge, the poses unrealistically showy. Rocha, a Brazilian artist who has done work on both “Superboy” and “Demon Knights,” really nails the tone here, throwing subtlety away in favor of a big budget take on these two historically low budget characters.

Marc Andreyko, in his limited space, does a fine job giving the basic beats of each character. Cassidy has a sense of humor and is a bit reckless, Pierce is a much more reserved man who seeks justice. You can almost hear Pierce say “I’m getting too old for this shit,” while Cassidy leaps off a cliff after a perp. If the humor was amped up a tad, I could see this being a fun book to read each month. The decision to set this in Los Angeles also furthers the cop movie feel, and Andreyko throws in little touches like a Korean taco truck to flesh out LA and distinguish it from some of the other DC cities that all seem interchangeable.

But I can’t help but ask this question: is this book a reaction to the supposed DC/Milestone comics legal issues?

There have been rumblings lately that DC has lost its rights to use the Milestone comics characters created by Dwayne McDuffie, and that is why both Static hasn’t shown up in Teen Titans and why the DC Nation block has been pulled from Cartoon Network (as Young Justice featured Static). Static features, for all intents and purposes, the same power set as Black Lightning and doesn’t have a name that points to his race in a quite stereotypical way. Many had assumed that since DC was launching a “Static Shock” title, that Black Lightning would be retired, letting a younger, more popular, less racist version of the character succeed. But since that character may be off the table, is that why Lightning is now getting his shot?

Regardless of why, it is good to see Lightning back, as he has been a much more fully formed character in the past 15 years or so, taking a big role in “Final Crisis” as well as in Brad Meltzer’s “Justice League of America.” Blue Devil, too, is a non-mainstream character that has been used sparingly and oddly over the course of his history, but has many unique character traits. It will be interesting to see how much of that Andreyko pulls into this short arc, or how each of these guys will be spruced up for the DCnU.

It may appear disingenuous that a site like this would be in favor of this title, for the reason that we took issue with “Justice League” basically being a Michael Bay movie in comics. The difference, though, is this: Michael Bay movies are bad. “Lethal Weapon” is not. On top of that, Geoff Johns and Jim Lee are two of the top names in comics, and so the bar was set pretty high. That is said with no offense to Rocha or Andreyko (especially Andreyko as his “Manhunter” run was phenomenal) but this is a book that needs a hook to get people to buy it, and partner heroes living in LA with a classic buddy cop vibe? That’s a hook. “Justice League” sells on its own, and therefore should have respected the intelligence of the people buying it; “DC Universe Presents” is on the verge of cancellation and needs to make people care about these two heroes. One is taking the lazy approach; the other is taking a risk.

And, honestly, this just works better.