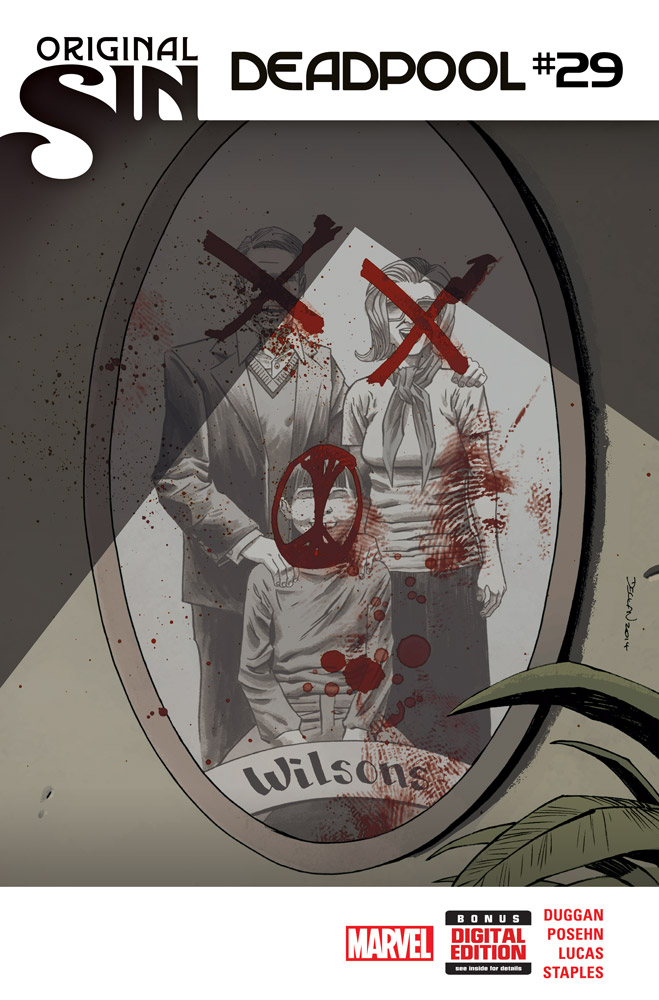 Agent of SHIELD Preston and Actual Person™  Scott Adsit delve into Deadpool’s past while Wade continues to mess around with vampires. Cool. Check out our review below! Mild Spoilers! 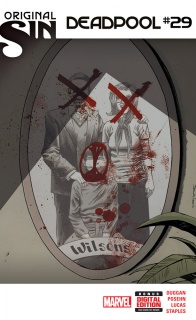 WHAT DID HE SEE?

If Deadpool has any role in the Marvel Universe, he’s its comedian. He’s the funny dude who likes chimichangas and comments on all the serious action going around, yadda yadda yadda. But just like how there are different types of comedians, there are different types of Deadpool. Sometimes he does nothing but make catch phrases and act zany with no real substance (Carlos Mencia, Dane Cook), sometimes he’s just a lovably entertaining loser (those Workaholics guys) and sometimes he helps Wolverine and Fantomex murder children (Marc Maron).

With the exception of that last one, there seems to be an unwillingness to gloss over Deadpool’s remarkably messed up past in favor of marketing him as a funny mascot that kids would love. There’s been a few instances where he’s really been taken seriously (Gail Simone’s run and Remender’s “Uncanny X-Force”come to mind) but he’s more or less functioned as Wolverine with puns. And even though that’s a fine place to be in, it’s also a bit of a static one with little room for growth. However, in Gerry Duggan and Brian Posehn’s recent Marvel NOW! run we’ve been seeing a lot more growth with Deadpool as a character, and with this “Original Sin” tie-in it seems to be pretty much confirmed. W

hat happens when you’re a person who builds a wall around yourself filled with wacky circumstances and jokes instead of facing your real problems?

Deadpool is turning into John Belushi.

And since this isn’t a MAX title, the cocaine’s been replaced with undead armies led by Dracula which, to be fair, is much more likely to kill Wade.

I find it really interesting how left-field the plot with Shiklah and Dracula feels. Considering that I never bought the digital comic where either was introduced, I felt a little out in the cold when Deadpool started blowing up bloodsuckers and married the Queen of the Underworld. With another comic, I’d feel like this is just another case of the character being too awesome to make sense; hell, if this were any other Deadpool comic the massive change in direction would seem pretty par-for-course.

But Duggan and Posehn have created two characters who ground this run really well, and are beginning to take the reigns as the series’ protagonists: Agent Preston and 30 Rock‘s Scott Adsit. By having two characters rally around Deadpool, then proceed to rally at him from a distance, we receive the contrast that explains why Deadpool’s recent behavior is so horrifying. While Preston and Adsit are working diligently to uncover Deadpool’s death and whatever happened to Ellie, he’s off pulling pranks, dealing with some ridiculous threats that have come out of practically nowhere. They, meanwhile, have to sift through his past and suffer because of him. Or because of Jason Aaron. Really, I didn’t think this would tie into “Original Sin” that much.

Of course, the reason Deadpool isn’t there for his friends is due to that ghoulish mission I was talking about earlier which, under John Lucas’s art, just seems really messed up. Deadpool’s mask is baggy, sloppy, barely hiding the outline of his incredibly messed up face that’s only further messed up by Lucas’s weirdly misshapen heads. That doesn’t stop the jokes from coming (one segment involving Bruce Banner and a human toilet is delivered exceptionally well) but Lucas’s art doesn’t translate well into the other side of the story. There’s one part where Scott Adsit looks like he was replaced offscreen with a china doll. It’s more than a little upsetting.

From a storytelling point of view, I can definitely see what Lucas is trying to accomplish and it works wonders when Deadpool and Shiklah are on page, but it doesn’t go as smoothly when dealing with other characters. For instance, the segment at the end tying into “Original Sin” just turns its players into weird caricatures (one character, who receives a disparaging remark from Scott Adsit for no reason, looks frightening in ways that probably aren’t intentional). Of course, Lucas does create a few interesting layouts (the double page spread in the end of the issue being a definite highlight, yet for the most part the issue is just sort of uncomfortable. Maybe if the art duties were split up and Lucas was demonstrating Wade’s fractured psyche I could get more behind it, but when Scott Adsit’s face turns into monkey-Hank McCoy’s I don’t know if I can fully back that.

All that said, I’m loving what’s going on with this latest “Deadpool” relaunch. It’s smart, it’s innovative, and it’s doing more for a character who, honestly, has deserved a lot more development than he usually gets. Aside from some rocky art, “Deadpool” #29 offers another horrifying insight into the psyche of a man who’s willing to jump off the edge so he won’t have to look behind him.

Final Verdict: 6.8 – Browse if you’re not into this series, but keep on buying it if you’ve already read prior issues. This run of “Deadpool” is going to go into some very interesting places.