In an issue with Lobo, self-destructing body armor, and a cemetery rigged with explosives, there is only one name you could reasonably expect to see on the cover; alone, monolithic, shining like a beacon. Like a lighthouse, helping ships pass through the foggy waters of common sense and feet to the other side, the side where anything can happen, and no muscle is big enough.

And that name, is Rob Liefeld. 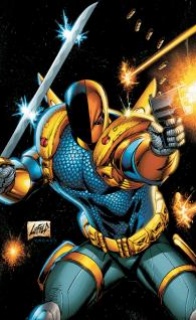 Written and Illustrated by Rob Liefeld

– “LOBO HUNT” part one!- For anybody else, hunting Lobo would be suicide. For DEATHSTROKE, it’s just business.

If I were to pass Liefeld on the street, I would give him a high-five. This issue must be a dream come true for him. In fact, his entire association with DC Comics in the New 52 feels like Liefeld rewriting his own history. He started off with “Hawk and Dove,” a book he worked on in his youth, which first put him on the map. And now, with working on “Deathstroke,” he is able to work with the character he clearly loved so much that he created the Marvel universe version of him, Deadpool. When, not if, he takes over “Teen Titans,” he will have finally gotten his hands on all the properties he wanted to during his initial DC run. And, despite it happening 25 years later, that deserves a high-five.

It is hard to review “Deathstroke” #9, because so many absolutely ridiculous things happen within its pages. Some things are superhero ridiculous, like Lobo punching through someone’s skull (while in a helmet); others are just straight up ridiculous, like Slade carrying a framed 8×10 of his dead wife around in his trenchcoat. (To be fair, Liefeld did draw Slade’s coat having a rectangular obstruction where an inside breast pocket would be, so yeah) This book is clearly not going for subtlety, and that’s fine with me; but in doing so much over the top business, I do find it a little hard to accurately rate it. So, advanced warning, take the numerical “Final Verdict” with a grain of salt. 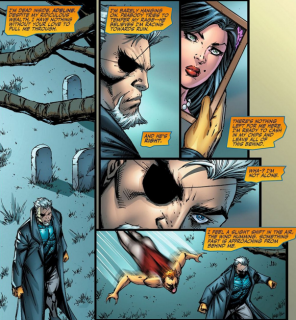 The story begins with Slade visiting his wife’s grave, where he is attacked by a gaggle of metas (one of whom is named Primus – could this be the underworld dweller?) who want to hire him for a recon job. Before they can talk business, they fight (and before they fight, Slade presumably stashes his 8×10 away). It is revealed in this battle that Slade has purchased the entire hillside his wife is buried on, created false tombstones along with hers, and rigged the others WITH EXPLOSIVES. I wish there was a backup feature in this issue which went through Slade purchasing the plot of land, and then explaining to the cemetery his plan.

So, after the fight, we find out that Lobo has escaped from prison, and is planning on destroying the Earth, and Slade is hired to hunt him down. This plan is relayed by Maxim, the most obvious case of an artist drawing themselves into a series in the history of comic books. 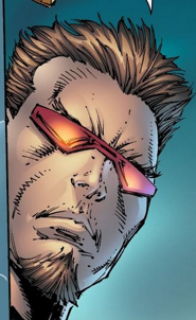 Slade will be accompanied by Zealot, jumping over from the WildStorm universe, and a gang of the Omega Youths (not an early 80’s post-punk band, but the aforementioned metas). We are then treated to a Lobo sequence, where we see how he escaped the prison. We also get to see that he was, apparently, one of the Flying Czarinans (and that everyone in this Omega operation wears the same stupid sunglasses that Maxim does). 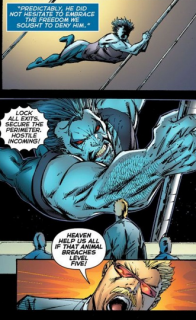 The art in this issue is what you’d expect from Liefeld: big guns, big muscles, gritted teeth, impeccably coiffed hair. Thankfully, nowhere in the interiors does Deathstroke appear to be a shapely lady, as he does on the cover, but there is no explanation given as to why Slade has ditched his New 52 armor, so important that it was re-drawn into “The Shade” #1. Can we assume that Liefeld just doesn’t like it?

Overall, this issue fits all the stereotypes you would expect from a Liefeld penned/pencilled comic, and in that way, it is the rare example of something being exactly as advertised. If you are a Liefeld fanboy, this is going to make you very happy. If you liked what Kyle Higgins and Joe Bennett did with the first 8 issues, you may be disappointed. If you’re hoping for the complex characterization featured in many great Titans stories, you’re probably barking up the wrong tree.

But, there is something to be said for escapist fun. In my “GI Combat” review, I said that JT Krul didn’t go insane enough with his ‘The War That Time Forgot’ feature, and no one would say that about this issue. It would be one thing if Liefeld was trying to approximate “Flex Mentallo” or “Sandman,” but he isn’t. He probably thinks those comics are lame.

And because I don’t think they are, I am clearly not the target audience for this book. I still maintain my theory that Liefeld is brought onto dying books to put them out of their misery, and so don’t be shocked if “Grifter,” “The Savage Hawkman,” and “Deathstroke” make way for the Third Wave sometime in the autumn.

Final Verdict: 5.0 – Exactly what you would expect