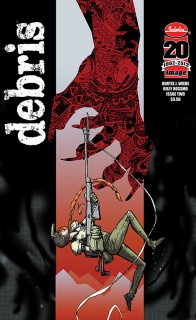 A deadly junk storm forces Maya to take refuge in an ancient, forgotten place where she soon discovers that she’s not alone in the land beyond the safe zone.

Artist Riley Rossmo is gradually becoming more and more well known among comic fans, and for good reason. Besides being a drawing machine, churning out more than twice as many pages a year than some of the biggest stars in the industry, Rossmo has a better grasp on sequential storytelling than many of those so called “masters.” His style is not only unique but practical, as it brings an incredible sense of life and motion to every single panel he draws. Even the brutish machines of this issue seem to dance across the page, as if they don’t even realize that they are made of only pencil and ink. This issue may be full of sequences that are sure to make true fans of comics as a medium whisper to themselves a simple, approving “Yes,” but Rossmo is not without his faults. For as lively and animated as his figures can be, his faces can often come off as a bit stiff and lacking in emotion, and there are more than a few panels in this issue that are without any kind of background for no particular effect — surprising, considering how detailed his drawings tend to be. Once Rossmo overcomes these obstacles, though, he will be one of the undisputed best of his generation of comics artists. Hell, he very well could end up being considered the best.

Rossmo often colors his own work, but this miniseries has colorist Owen Gieni working with the penciler, and the effect is marvelous. Post-apocalyptic stories such as this one are often done in incredibly bleak tones, often bordering on greyscale (if, of course, it isn’t actually in greyscale). Gieni, however, has chosen a surprisingly pleasant pallete to color this series with, and in particular has a fondness for sky blue. This is not, however, a negative mark against Gieni; the lighter pallete fits the hopeful tone of the book so far perfectly. Certain bits of the setting, as well as certain antagonists, still fall under the grimy touch of post-apocalyptic fiction, but the world as a whole has an air of potential to it, the hint that things might just pull through, and it is all thanks to Gieni’s color. With only two issues left, it is entirely possible that the story is going to come to an abrupt, dismal halt, but the uplifting colors could very well make that ending all the more heavy. For this issue, though, Gieni does an excellent job — not only technically, but in his ability to effectively subvert our genre expectations.

Writer Kurtis J. Weibe has proven to us multiple times in only the past year that he knows how to write an entertaining story, but the plot and setting of “Debris” have yet to pop like previous stories, such as “Peter Panzerfaust,” “The Intrepids,” or the gone-too-soon “Green Wake.” The post-apocalyptic genre is in vogue right now, and Weibe has not exactly done anything to help his story stand out from the many other post-apocalyptic tales that have come out in the past few years. Sure, how the story is told matters more than the superficial “unique” details that often lead to the over-praising of a mediocre product, but it certainly helps make sure the story sticks in the readers mind, or that the reader even picks it up in the first place. Luckily, the core of any good work of fiction — characterization — is Weibe’s strength, and redeems the comic’s lack of a writing “wow” factor. This issue introduces a new major character, one who is an ideal complement our heroine. At the same time, he does not seem like a cheap, inverted version of the protagonist; rather, the two have some major similarities, which allow the minor details to clash that much better. Weibe clearly put much thought into how these characters compare, and you can see the result in their dialogue, which is entirely natural. Seeing how these two interact is well worth the price of admission alone, and outweighs any doubts yet another post-apocalyptic comic may plant in discerning readers’ minds.

“Debris” may not be the best comic that Rossmo and Weibe have worked on, but it is well worth checking out — especially if you are a fan of either of the two creators. However, fans of Rossmo may be more pleased than fans of Weibe, as the writer has yet to really “bring it.” It’s entirely possible that Weibe is going to turn things around in the next two issues, turning the over-saturated genre on its head, but for now, it doesn’t stand out from a story prespective, despite the solid characterization. At halfway through a four-issue miniseries, that is not a good place to be in. Rossmo, though, reminds readers and reviewers alike that this is a visual medium, and does enough truly great work to make sure we will stick around for Weibe to pull the Ace from his sleeve.