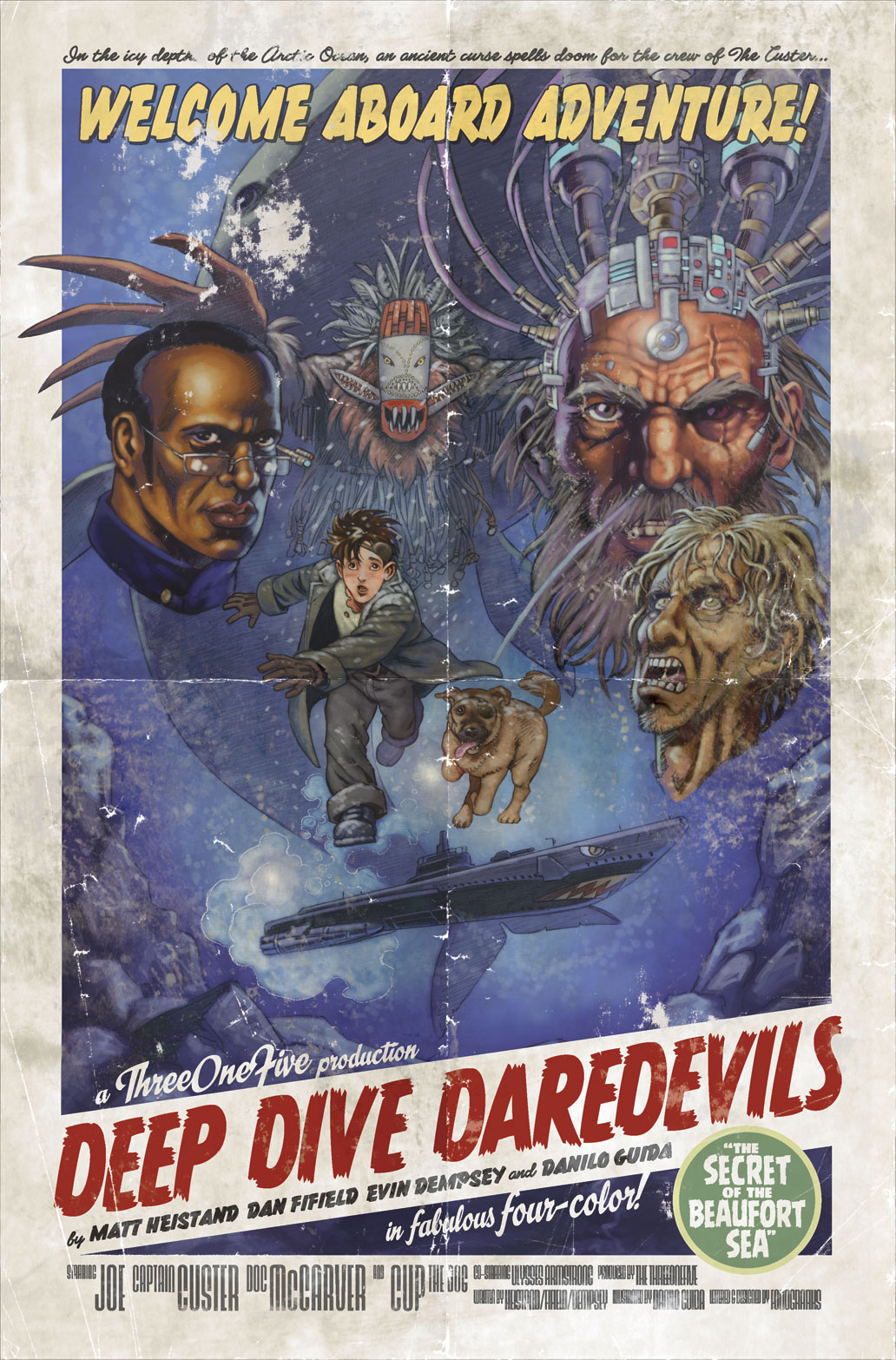 We don’t always review webcomics in our weekly reviews, but when we do it’s because they’re quite good. 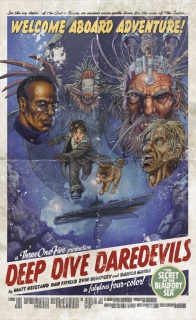 Some call them pirates, some call them heroes, but none dare call them cowards! In all of nautical legend, never before have such strange and courageous figures come together to unravel the incredible mysteries lurking in the inky ocean depths. If the heading be danger, make way for the
DEEP DIVE DAREDEVILS!

Deep Dive Daredevils is a weekly nautical adventure webcomic suitable for all ages, which updates every Tuesday.

A good webcomic is a tricky thing. There are essentially two kinds that seem to strike an audience – the regular Sunday strip-esque style, and the serialized comic/graphic novel. The first one is easier to digest; set up in small portions that are formatted for a singular weekly dosage, it’s easy to get in and get out of most of those type of comics. The latter is a bit more difficult, though, because reading a full comic issue in singular weekly bursts can be awkward and off-putting if the pages aren’t properly formatted to a singular viewing scope. It’s why “trade waiting,” so to say, is a lot easier with web comics, because it’s honestly better to just wait for it to be done and get the whole story.

“Deep Dive Daredevils” is essentially proof positive of this, although only to a degree. When viewed as a collected whole, with all the pieces of the first adventure available for a singular sitting (such as what I was provided), the book reads much better than it does in singular installments. As a full book, “Deep Dive Daredevils” is a fun, interesting and decidedly different sort of book than you’re likely to read, as it stays away from conventional tropes that a lot of webcomic people like to play around with (that is to say, more popular genres than Golden Age-esque Adventurers in a submarine). It’s a comic that really seeks to offer something unique to itself, and while its influences are relatively clear from the get-go (there’s a very strong undertone of Russ Heather’s “Sea Devils,” or even Kirby’s work with “Challengers of the Unknown”, albeit much more grounded) it never actually seems content to be like anything you’d read elsewhere – and that’s its strongest selling point.

When viewed with a singular focus (such as with the latest pages of Book Two, ‘The Cajun Caper’), “Deep Dive Daredevils” still holds up well. While the comic is a bit less intriguing that way, the whole creative team does do a good job of keeping the book’s attention on point to what needs to occur for it to exist as both a weekly web comic and a single comic book. Some pages are stronger than others, of course, but the overall experience is quite good. That said, a read-through of the full comic once completed does improve the overall experience of the read.

In terms of just this initial story, though, there’s a lot to like. The book’s crew is familiar enough that it’s not hard to latch on to the various archetypes, yet it also remains creative with the way that the book plays with the type of characters aboard. Billy, for instance, is that stereotypical early 1930s-40s kid who you could see delivering papers if he lived in New York, with a lovable companion named Cup; yet despite playing off a stereotype, “Deep Dive Daredevil’s” Billy is formed into a slightly more modern iteration of a classic mold, as is his companion, and the way he fits into the overall story offers up an interesting and earnest perspective into the weird world these characters sail through. The adventure aspect of the story is also pretty fun, and while it wouldn’t do any good to spoil what occurs in the book it’s worthwhile to note that it is certainly something you’ve most likely never seen before.

It’s not perfect, though. “Deep Dive Darevils” is a very fun read, but there are a few things in it that are slightly suspect. Some of the dialogue is a bit off and feels less natural than others, in the way that anyone trying to completely ape a style or a time period can overdo it on occasion. The resolution is also a bit off, as the way things tie together in the end – while actually quite creative – plays out a touch silly. The book has its quirks, but it’s hardly quirky, so when the pay-off arrives it’s done in a way where some of the books humor doesn’t match well with the gravity of a situation, and it could’ve done with a bit more space to flesh out the gravity of the situation. Yet all in all, the book is so generally good that it’s easy to let that slide. It’s certainly not the type of ending that breaks a book, and it does play up some of the time-appropriate ideas the book plays with in its retro-ideas.

Given that the book has three writers, it’s a bit hard to critique any one contribution easily. Yet one thing is clear about the collective: the final product between the three is pretty ace. A three-man writing team isn’t something you often see, but when you look at the book’s wide cast, each with their own unique ticks, it becomes relatively clear how much good having that many voices behind a script can do. It’s perhaps not something that would work for everyone; rather, this team works because we can easily assume the writers are well in sync, and therefore are able to work on a book that speaks to all of them as opposed to just one. That combination of voices turns out just that, and the end result is rather interesting to behold. Whatever it is they’re doing in terms of the division of labor, it certainly works.

Of course, it is the singular talent of Danilo Guida behind the illustrations of the book, and it’s here where the book really soars. Guida’s art offers up a unique sense of character, with the various inhabitants of the book ranging from the gangly to the muscular to the futuristic and beyond. On top of that, Guida’s eye for setting and detail is wonderful, as the bush offers up a lush icy landscape for the Daredevils to cruise through. It’s important to note that when a book takes place primarily in a water-based setting, it’s easy to phone in a lot of the details; Guida’s tendency to do just the opposite of that, keeping true to the sea’s consistent motion, helps sell the book’s basic premise quite well. With all that tied together with some nice, faded coloring, “Deep Dive Daredevils” is a very solid looking comic.

Mind you — there are a few off-moments (a three-legged dog balancing on two legs on one side?) and things that are lightly suspect, yet the overall product is rather grand and impressive, all culminating in the end for some rather gorgeous splash pages.

Ultimately “Deep Dive Daredevils” doesn’t seem like the type of book that could reach more than a niche audience at a first glance given the way it comes out and the subject matter, yet taking the time to sit and read the first book on its own proves that looks can be deceiving. With a solid heart and a dash of Kirby, “Deep Dive Daredevils” winds up being a relatively entertaining adventure book, full of interesting characters and enough surprises to make you want to come back for more.

Final Verdict: 8.0 when read as a whole, maybe a little bit less if read page by page depending on how you prefer to consume your comics