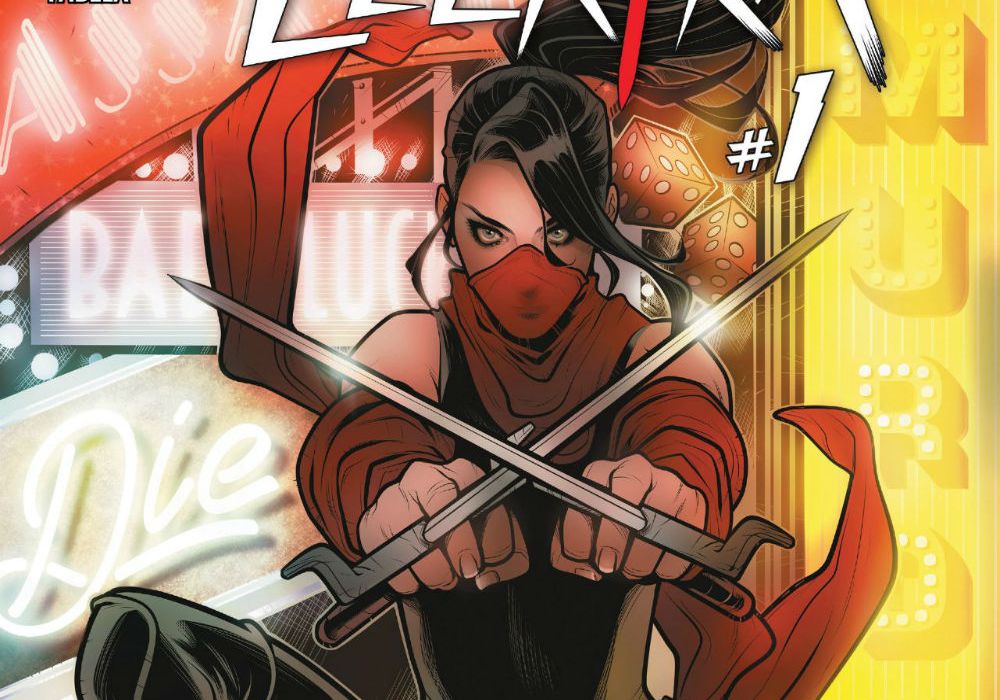 Elektra’s always been a divisive character to portray at Marvel, but she’s always had her share of quality series. But now, invigorated by her recent portrayal on the Daredevil Netflix series, there’s going to be a lot of newcomers looking for quality material. Can this new series both live up to the standards of previous ones and satisfy newer fans? 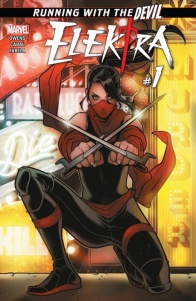 CASINO BATTLE ROYALE!
Running from her tumultuous past, ELEKTRA attempts to lose herself in a vibrant sea of neon, noise and anonymity: LAS VEGAS. But how long can a former ninja assassin really hope to escape the vortex of violence that encompasses her life…especially when there’s a new player in Sin City that has her in his sights for his newest game? Enter: Arcade.

Matt Owens doesn’t stray far from what we know of Elektra’s character – she’s still a mysterious yet sympathetic bad-girl type. Which is not necessarily a problem, as Elektra’s had more than her fair share of life changing character arcs. Instead, Owens chooses to focus on giving her an original setting. Instead of battling the hand, or Bullseye, Elektra’s coming face to face with the sometimes X-Baddie Arcade. He blends the gritty realism of Elektra with Arcade’s wacky character to create something fresh, but a little pale in execution. The issue has Arcade running a Vegas casino as a front for… drug trafficking? It’s not made entirely clear what Elektra’s up against, which makes it a little uncomfortable to read.

Owens writes a good female support in Lauren, the bartender at Arcade’s casino. On the surface, she appears to be a shallow character, someone who came to Vegas in the hopes of being an actor, but works in bartending to afford it. However, underneath it all she’s a victim of physical abuse from a guy called Jasper, who seemingly works for Arcade. In that, Elektra works as a veritable role-model: sure, she’s a killer who has villainous lapses but she’s a survivor of abuse in her own way. It’s a great way to establish her as a strong protagonist in this debut issue.

However, this book does have a fair share of clichés pop up which feel a little hollow. Perhaps, with the setting of Las Vegas, some of these are unavoidable, but it just feels like Owens didn’t really try too much in this regard. The scene with Elektra and Lauren at the bar plays out predictably – Elektra is sitting by herself, drinking and reflecting on and running from her past. Not all of these are bad, thankfully, as some are deserving of Elektra’s character and are likely what people are expecting to see from this issue. When we first see Elektra suited up to fight, she quips with the bad guys, and serves them some dramatic irony to boot. It’s cheesy fun, not taken too far to the point of annoyance but executed just right.

I hadn’t seen anything previously by artist Juann Cabal, yet he serves up some pretty fine work in this issue. The style is reminiscent of Jamie McKelvie (“Young Avengers,” “The Wicked + The Divine”) with sleek, minimal linework that befits the shiny Las Vegas setting. This is a comic that revels in sheer style, but Cabal does have the artistic chops to make sure there’s substance to back it up, too. The back end of the Elektra-Lauren scene features some good subtle body language: we see Lauren’s bruise before the subject is brought up, and we’re witness to Lauren slowing breaking down as she divulges her backstory to Elektra. It’s great visual storytelling, and it makes for an attention grabbing opening scene.

Cabal also proves he has a solid mastery of sequential story telling in the night club action scene. Once we’re introduced to Elektra in her new costume staring off Jasper and his group of thugs, we’re given the most visually striking and well executed page of the whole issue. We see Elektra battle effortlessly over a series of twelve panels, that feels kinetic and punchy. It flows excellently and almost feels like a movie in its execution, all the while looking realistic and believable. Cabal shows some great panelling in the following pages two – Jasper’s body is separated into three panels so we can see the flow of events as they happen.

The only issue I have with Cabal’s art is that the backgrounds and settings feel way too stock-photo-y and generic. Of course, the fact remains that it’s set in a Las Vegas casino, which isn’t much to work with for an artist, but there’s some scenes which are rendered a little flat, hurting the comic’s ability to fully immerse the reader. One example of this is in the Elektra-Lauren bar scene. The surrounding is a high-class Las Vegas bar, yet behind the counter we see a shelf sparsely populated with ten bottles of alcohol at the most. The rest of this scene is also largely bland yellow walls, which when repeated for roughly five pages really starts to wear thin.

Colorists Antonio Fabela and Marcio Menyz both do a solid job on this issue, bringing the vibrant lighting of Las Vegas to the comic page. One of my favourite scenes earlier on shows Elektra reflecting on her eventful, storied past over a shot of mescal. The colorists use a blurred pallete of reds and yellows in the background, depicting the busy lights of the bar around her, but really lending to the feel that Elektra’s alone in this moment. However, as previously said, the rest of this scene overuses the yellows a bit too much, which makes the reading unpleasant after overexposure. They do a good job on the night club scene at the climax of the book, however, using a variety of purple and blue shades to immerse the reader in the atmosphere. It’s somewhat restrained, however, and some characters are completely unaffected by the lighting, which again can be jarring to the narrative flow. The night-club feel doesn’t stay consistent throughout the whole scene and seems to fizzle from vibrant neon to normal without any explanation in the narrative.

Final Verdict: 6.8 – “Elektra” #1 falls into stereotypes a little too often to be remarkable, but remains a solid debut for the fan favourite character’s new series.