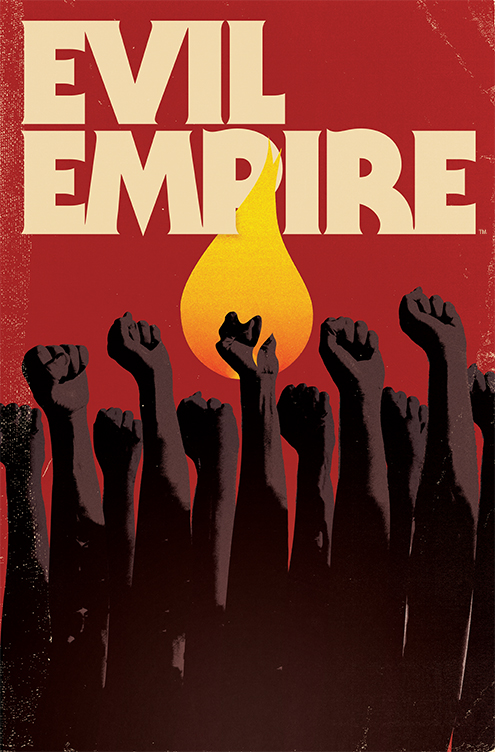 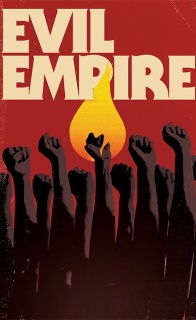 WHY WE LOVE IT: After POLARITY, we just had to work with writer (and Say Anything lead singer) Max Bemis again, and his thrilling take on how a modern society could evolve into an evil empire is absolutely terrifying.

WHY YOU WILL LOVE IT: Every fan of fiction is aware of the trope of the “evil, sinister empire” i.e. the Empire in “Star Wars.” Oftentimes, when we are introduced to these totalitarian establishments, they are already fully in power and it’s up to our hero to bring back order and peace. However, in EVIL EMPIRE, we explore how that would unfold in a real-world setting. How close to the precipice are we right now in the world we live in? Would we let it happen? More specific to this tale: Would we secretly WANT it to happen?

WHAT IT’S ABOUT: Told through the perspective of an underground rapper named Reese, Max Bemis’ gripping story explores a scenario in which we watch modern society gradually evolve (or is it devolve?) into an evil empire.

I’m just going to assume that, at this point, you’ve read/seen The Hunger Games, 1984, and or Clockwork Orange. If you haven’t, then have I got some recommendations for you, or I would if you existed. For everyone else, it’s interesting to note that most of those dystopian societies spring up in media res, with no real demonstration of how the world got so bad as to make kids fight each other for our entertainment, spy on every citizen, and let Malcom MacDowell roam the streets.

I mean yeah, that happens in the real world but what is this, a social commentary? Probably. I know “Evil Empire” #1 is, as well as a commentary on the dystopian stories that have become increasingly popular over the last century. “Evil Empire” opens with the world’s citizens already in invisible chains. A homeless man wanders the street until he’s attacked by more practical versions of the Droogs from the previously mentioned Clockwork Orange. Another man tries to save the homeless person, before two men who bear a striking resemblance to Miguel Sapochnik’s Repo Men with balaclavas and armbands arrive and execute them on the spot.

Flashback twenty-five years earlier and we begin investigating the mystery of just how a police force like that could come into power. It’s an interesting approach to dystopia, as we’ve only ever been given broad strokes of how society crumbled from the inside. Here, we’re given a specific viewpoint from a character with a front-row seat to the government’s downfall. Underground rapper Reese gets wrapped up in the political machinations of the two men running for president.

As I’ve said, it’s a unique way of handling dystopia but there’s not much connection between the present and future. The opening scene that establishes the issue becomes forgotten as the focus shifts to the interactions between Reese and one of the presidential candidates, culminating in a final scene that fails to bring us back to that future with a sudden twist that seems to only be there for shock value. Not for nothing, but the first time I read this I didn’t even get that there were two timelines. Does that mean Bemis should make his writing “easier to understand?” Not really, at this point I’m probably at E-Z Reader level learning, but a connection between the two timelines, and the main premise behind this series would be nicely appreciated.

That’s not to say there’s nothing to be found in the main story. Although the plot seems rather disconnected, there’s a charm to be found in the two main characters, especially Reese who Getty gives a great sequence where she decides whether or not to call a guy back. It’s a simple sequence, yes, but Getty’s excellent with character acting and you can really get the sense of frustration and happiness from Reese dialing the phone. If there’s a star to be found in this book, it’s Getty who brings charm like that to the entire issue, while giving us genuine threats from people like The Repo Cops at the beginning, whose design is honestly rather damn cool. Likewise, Bemis’s writing does seem a bit scattered but his dialogue feels so natural that you don’t even really notice you’re not sure what the main plot is until the issue’s over. I still don’t know what the main plot is though. For a mystery, its clues are all over the place and for all I know that could very well be a deliberate choice. At its best, “Evil Empire” #1 is incredibly interesting; an autopsy of a dying society. Unfortunately, you might need to wait for the trade before you can see the whole scope.

Final Verdict: 6.4 – A little messy, but maybe worth checking out when the all the pieces are in place.