Overpopulation; it’s a scary issue and now, Sam Read and Caio Oliveira have published a comic in conjunction about overpopulation with Thought Bubble: “Exit Generation.” Read our review below on this unique take on one of the world’s most serious issues. 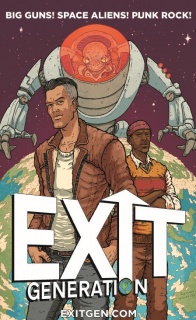 20 years ago most of Earth’s population abandoned the planet in search of a less crowded place to live.  But rather than descend into chaos, the world they left became a paradise, free from poverty, war and crime.

In this utopia Jack spends his days hanging out with his friend Mo, and obsessing over action movies and punk records, longing for some real excitement.  But then a bunch of extra-terrestrial visitors arrive, and Jack’s wish is granted…

Exit Generation is a four part series telling the tale of one boy’s search for purpose against a backdrop of space aliens, big firearms and punk rock.

It’s so easy in writing to present an issue, dress it up a bit, and make a dialogue about it your story. That’s not necessarily bad, plenty of great works have come from that, but in “Exit Generation” Sam Read and Caio Oliveira have completely subverted  every story about post-space colonization Earth. Rather than focus on the pioneers of the new frontier, “Exit Generation” places its focus upon those left behind on Earth, which has become a Utopia. Because all the people who went out into space died, thus reducing the human population by a few billion. Oops.

From there, Read and Oliveira create a world where all the problems the world had have been solved by the decrease in population. This is where the comic reaches its logical low-point as I’m pretty sure discrimination/war/Reddit would still be around. Reducing the effects of a mass depopulation to nothing but positives makes for a rather, not uninteresting, but unfulfilled story. There’s allusions to life immediately after the loss of the space pioneers where life was hell, but this period is mostly brushed over. While the main story of teenagers who grew up on an Earth with a population that never reached four billion is interesting, it’s hard not to feel like there’s a loss in potential in the exemption of the Post-Exit years.

That said, the down-to-(future)-Earth approach in storytelling does help ground the characters in the new Post-Exit Earth, but as appealing as the characters are they only feel like one small piece of a world that’s not as fleshed out as it could be. “Exit Generation” is told through the view of Jack, a teenager whose dad died during The Exit and whose mom abandoned him and, as great as he is, his one story is not as interesting as the world at large. Does he ground the story? Yes, absolutely. Unfortunately though, there’s not much for him to ground. Life just got better because we lost three fifths the population. There’s still an excellent story to be told there, but it just needs the connection absent from “Life was horrible immediately after everyone died” to “We got hella better twenty years later.” It’s not as if there’s no plot however, aliens show up conveniently after Jack gives a monologue about wanting conflict in his life so they can kidnap his family. Though the aliens are funny, their sudden appearance is almost distracting in how little it had to do with the prior pages.

All that said, “Exit Generation” still holds a lot of promise. Caio Oliveira’s is fantastic with faces, especially the aliens’ and does a lot of great work with the characters. The opening sequence, a montage of how the world went from terrible to hopeful to terrible to utopia is honestly pretty cool and though the panel depicting the space flight is a little flat, as are a few other panels. Overall, Oliveira doesn’t exactly have a lot of big action scenes to draw, as the majority of this issue is people standing around and talking about the new world, rather than showing it, but when he gets to depict an alien abduction or Post-Exit riot, his art really begins to shine.

Really, “Exit Generation” is hardly a bad comic, but it’s one that definitely holds a lot of potential. Who knows? This issue may only just set up the story and follow more on the premise later. However, if the ending is any indication, future issues will give more focus to the whole alien invasion plot rather than exploring Post-Exit Earth. Read and Oliveira have a genuinely unique premise with the world they put their story in, and it would serve them much better to flesh it out than to go down a generic alien invasion story.

Final Verdict: 6.1 – Browse. There’s potential, but it may not be followed up upon. Maybe check it out as a collection.