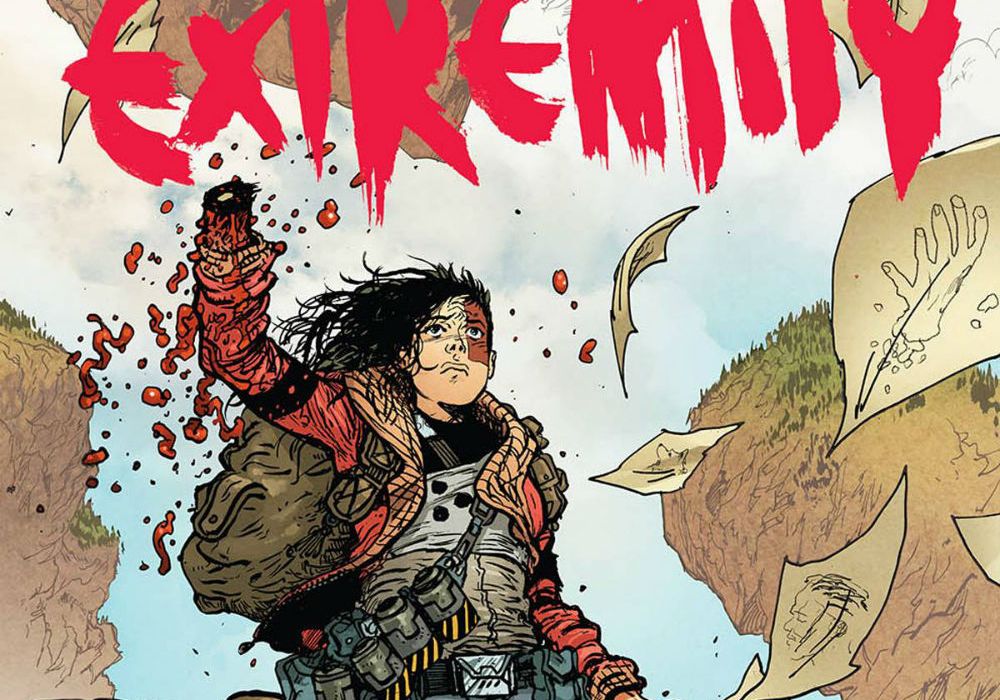 Daniel Warren Johnson is a comic creator who has previously been known for light-hearted series like “Space Mullet,” So when he announced “Extremity,” a post-apocalyptic sci-fi revenge story that came with the promise of being brutal and engaging, I was shocked. Now that the first issue has hit the stands, does Johnson’s writing work as well in darker, serious tone? Read on and find out! 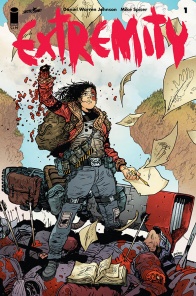 Thea dreams. Not of a better life, but of revenge on the clan that ruined her family. With ferocious battles between man, machines, and monsters ahead…who knows where her quest for vengeance will take her? Creator Daniel Warren Johnson and colorist Mike Spicer present a bold new vision, where the beauty and imagination of Studio Ghibli meet the intensity of Mad Max in this all-new Skybound Original.

Right from the start, Johnson doesn’t pull any punches. We’re introduced to protagonist Thea, who was her clan’s greatest artist before an invading army caused her to lose her drawing hand. Oh, and they killed her mother too, but that’s oddly downplayed here in favour of Thea’s hand. Nonetheless, Johnson’s world is immediately both visceral and vivid in scope. “Extremity” uses a compelling approach to world-building, not unlike visual storytelling in video games like Dark Souls. Scrapping excessive narration in favour of a more visual approach to telling the story, Johnson leaves just enough gaps for readers to fill in with their own interpretation, with the invading Paznina and Thea’s father’s face mask made of the teeth of his enemies.

Johnson’s cast of characters are a diverse lot that all avoid fantasy/sci-fi stereotypes. Thea is headstrong, but brutal and unforgiving, shown when she rather cruelly exacts her revenge upon the Paznina general that took her hand. Her brother, Rollo, is comparatively shy and sensitive, showing this nature in a well written scene showing him trying to hide as Thea and her clan storm the Paznina’s war machine. However, I find that the antagonist, the Paznina General Asmund is a somewhat flat character to counter the dynamic Thea and her friends. We don’t really get a sense of his motivation, or why the Paznina hate the Roto (Thea’s clan) so thoroughly. We are given a debut scene in which we’re shown his partial to playing music before a battle, however it’s more of a scene setter for the upcoming attack, and doesn’t really explore his character, or his race/clan too deeply.

One character which I found the most interesting was Thea’s father, Abba Jerome. Like Thea, he’s a motivated man who is uncompromising and vicious in his fighting. He favours his daughter as a successor to his cause, yet he’s disappointed by his son, whom will one day take his place as ‘Abba.’ I find that the mixture of wisdom and brutality that he brings to the story the most interesting. In the sequence where they capture General Asmund, he calmly tells Rollo that he must build up a terrifying reputation by partaking in pretty horrific acts. It’s told in a very comfortable father-to-son tone, which makes the scene all the more unsettling and surprisingly fun.

The biggest sell here is Johnson’s art, and it exceeds expectations. Johnson’s world of The Rising Plains is beautifully rendered, and feels old and lived in. As the series is a veritable blender of genres, we get to see Johnson pen all kinds of environments, making for some really dynamic storytelling. Right from the first page, we see a mix of sci-fi and fantasy as what looks like a veritable Hobbit home is attacked by flying, laser-shooting gunships. Further on in the book, we’re given a one-page spread as Jerome and the Roto fly towards the huge Paznina war machine. It’s enormous, castle-in-the-sky design is suitably intimidating, yet sitting amongst the billowing purple clouds, it feels fantastical.

The character design is sublime, and is done with a simple elegance. Thea and her family all wear pretty normal clothing when you look closely, but their clothes are old and tattered, and covered in bits of sci-fi looking armour to make it interesting. Jerome’s tooth mask is pretty harrowing, especially when you learn the story behind it, but it’s a little uncomfortably similar to the motorcycle mask of Immortan Joe from Mad Max: Fury Road. The best work here, however, is the overlooked Paznina knights, who bear shark-fin style helmets, and an overall medieval look. They all carry a variety of guns, spears and swords for weapons, and have creepy techno eyes on their visors which fit in well with the overall genre mish-mash aesthetic.

Never let it be said that Johnson can’t pen an engaging action sequence. The pace hits top gear as Jerome’s battering ram ship smashes the wall of the war machine. The panels move back and forth between the Pazninans and the battering ram quickly to build tension, which is all released in a big, stunning double page spread of Jerome and his soldiers unloading to attack. Even the scene with Rollo skulking around the empty halls of the war machine has a deadly confrontation that pulls you right into the thick of things. Johnson choreographs the scene beautifully as Rollo’s enemy knees him to the ground, before Thea shows and up and promptly decapitates him. Johnson’s keen eye for pacing in evident in these sequences, and it makes for great comic work.

Mike Spicer’s colors as a big part of bringing Johnson’s visceral world to life, just as important as Johnson’s contributions. Spicer brings a neon vibrancy to the world, mixed with dull colors to set a brilliantly grim yet sprawling world. He uses bright primary colors to great effect when Rollo is rescued by Thea. The speed-line filled backgrounds are highlighted with a fiery combination of reds and yellows, giving us a great sense of the high-speed pacing of the sequence. Additionally, Spicer is a big part of the one-page spread of the war machine: the mood isn’t darkly lit to make it feel overbearing, but filled with faded purples and blues to create a mystical effect.

Final Verdict: 8.9 – A high-octane debut that thrusts us right into Johnson’s world – “Extremity” is as beautiful to read as it is visceral.