When Matt Fraction laid out the plans for the two books he would be writing featuring the Fantastic Four and their supporting cast, one of the implicit statements was that you did not need to read both books – “FF” and “Fantastic Four” would be separate entities that would be accessible on their own, even if reading both would enhance the experience.

It took one calendar month to prove all of that bunk.

Warning: some minor spoilers appear below. 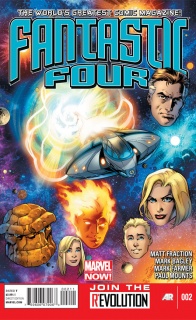 Marvel NOW! The First Family leaves time and space! How long can Reed hide his motivations from his family? What undiscovered places, amazing things, and incredible people are out there waiting to meet the Fantastic Four?

This issue feels like a poor man’s version of “FF” #1 – the same ground is covered, but in a clunkier way, with lesser art. “Fantastic Four” is supposed to be about the epic journey the family takes across space, time, and alternate dimensions, whereas “FF” is about the replacement heroes watching over Earth while they’re gone. “FF” #1 did a masterful job introducing new readers to both the members of the Future Foundation and the four “heroes” that would be taking their place on Earth while they were gone. And while it makes sense for “Fantastic Four” to touch on the replacements, they get almost the same face time that the Four get, but without the charm or wit that was found in “FF.”

If this were the work of two writers, it would make significantly more sense, but because these both come from the pen of Matt Fraction, this is frustrating on an entirely different level. Certain scenes in “Fantastic Four” #2 feature the same characters having very similar conversations that they had in “FF” #1, but feel hollow and phony. The Thing/She-Hulk scene, in particular, was brimming with so much heart in “FF,” and here seems like a cookie cutter version of that touching scene, with a little more joke-y sexism thrown in for good measure. Part of that might be due to the difference in artist styles between “FF”‘s Mike Allred and “Fantastic Four”‘s Mark Bagley. Bagley doesn’t do bad work here, but many of his characters (especially his females) seem generic and could be swapped out by simply changing hair/skin color/length. Where Allred brought out the characters’ humanity, Bagley tends to go for the bigger “classic” poses and looks which, in a comic with precious little action, doesn’t serve the issue particularly well.

But the biggest problem with this comic is that we are now 1/6 of the way through Fraction’s first year on this book, and the entire “space vacation” we’ve seen so far has been…nothing. Two issues of hanging out at the Baxter Building, and doing the things that “FF” is supposed to have covered, only doing it worse. This is decompressed comics at its worst; one of the hooks to buying this comic was the “year away” aspect (nicely undercut with the idea that it would only feel like 4 minutes on Earth), and so far that is a big bust. Now, I know that next month will start that journey in earnest, but that does not excuse 40 pages of preamble. How much more tragic would Reed’s illness be if it wasn’t revealed until the 6th or 8th issue? Fraction could even have his cake and eat it too by having “FF” acknowledge the illness, with keeping it a secret in “Fantastic Four.” That would do exactly what Fraction promised – keep each book separate with giving information that would enhance reading the other in each book.

Instead, double dipping is already the name of the game. “FF,” due to Allred, was always going to be a slam dunk for me, with “Fantastic Four” in the maybe pile; two issues in, this book feels like it isn’t even a thing yet and, in many ways, it isn’t. Because of Fraction’s track record, I presume many people will give him at least 3-4 issues to get his bearings, and that is fair. However, it rarely seems wise to defeat your own mission statement 60 pages into a two-book run. Hopefully, the family being in space will provide Fraction and Bagley with the infinite palette to do a truly interesting comic – but so far, this is less Marvel NOW!, and more Marvel Wait and See.

Final Verdict: 5.3 – Perhaps one day this will be the start of a great run – right now, it just feels perfunctory