The Faux Four and the Future Foundation fight the Frightful Four. But is it a Freaking Fantastic issue? Fenture Further to find out! 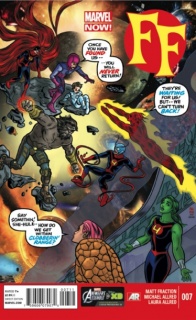 • Field trip…into the heart of the Negative Zone!
• Scott Lang has already lost a daughter… watch what happens when he puts it all on the line to save… Bentley-23?
• The shocking reveal of the villain pulling the strings and pitting family against family — and a rescue mission unlike anything you’ve ever seen — FF vs FF!

What the hell does “FF” stand for?

A while ago the answer was much more clear. “FF” stood for the Future Foundation, Jonathan Hickman’s Fantastic Four taken to the Nth level. Yet, in this issue of “FF” vol. 2 there’s a moment where someone refers to the new team, consisting of the Future Foundation kids and the “Faux Four” as just “FF.” And this speaks volumes about what Matt Fraction and Mike Allred are doing with this title.

It’s quite obvious that Matt Fraction went through an omnibus of the original Lee/Kirby run on “Fantastic Four” before beginning work on this series. The influence is clearly there as “FF” #7 reads like Fraction traveled back in time to the 60’s and assumed Stan Lee’s place. The heroes don’t really get along, the villains talk cheesy but are wonderfully diabolical, and the conflicts so far have been black and white. All of this leads to a refreshing pace as not many comics in print right now are as fun as “FF” is. Fraction’s writing on this series is half Lee pastiche and half of his own sensibilities, which helps a lot in terms of grounding some characters and making sure the series doesn’t lose its focus when it comes to delivering strong characters and plots, which it certainly does (We Love You, Scott Lang.)

Also, it’s pretty funny to see an homage to a series that had one female character stay in the back and turn invisible to avoid trouble be so progressive. Kudos to “FF” for being the first comic book to use the words “heteronormative” and “cisgendered.” Of course, that type of dialogue may seem a little too tongue-in-cheek, as does a lot of an issue, yet it all works. This issue’s main villain, The Wizard, is basically continuing his plan from Hickman’s “FF”. However, he is also written completely differently than the bad guy plaguing the Future Foundation a couple of months ago. In fact, he may come across as completely two-dimensional but that flatness serves the vibe of the book while still remaining true to the character. Wizard’s written pretty ridiculously here, but it’s clear that, at his core, it’s still the same character who’s been plaguing the team for years. This probably helps describe Fraction’s “FF” best, it’s completely ridiculous and in its own world not too obnoxiously over-the-top that it seems out of place in the Marvel Universe. In fact, it probably enriches it.

Of course, this mash up of Lee/Kirby with modern sensibilities and characters wouldn’t work nearly as well with any other artist but Mike Allred. For a while now, Allred’s been doing “Pop Art Kirby” and with this series it seemes he’s more “Kirby” than ever. Allred’s art makes any fight scene look like it could fit in any comic predating 1980 but he’s not content to just sit back and do an homage. Allred does so much more here. One particular panel, with Ant-Man shrunk down and trying to assist a teammate, is pretty darn creepy but at the same time greatly innovative. Plus, Allred’s layout and panels ensure the audience that this is no mere tribute. This is a comic that is simultaneously looking back to 1963 with feet firmly planted in 2013. The only gripe regarding the art would have to be how static some characters feel. One panel has the kids flying through the air but some look like they’re perfectly still and posing and in another scene it’s not clear if Dragon Man is tackling Blastaar or giving him a gentle hug from behind. Overall though, Allred’s art is a perfect fit for a book that might have suffered greatly without him.

Fraction and Allred’s art is an anomaly in the Marvel NOW! landscape. It doesn’t read like any other book being published and nor does it look like any other title. “FF” is the type of book that could only really happen with these specific collaborators and for that the story comes out so much stronger and with so much heart. The reason “FF” doesn’t stand for just Future Foundation or Fantastic Four, or anything really, is because it isn’t either of those books. “FF”, though clearly heavily influenced by some other styles, is its own title with its own unique story, characters, and feel. And for those reasons, it’s one of the most stand-out books from either of The Big Two publishers.