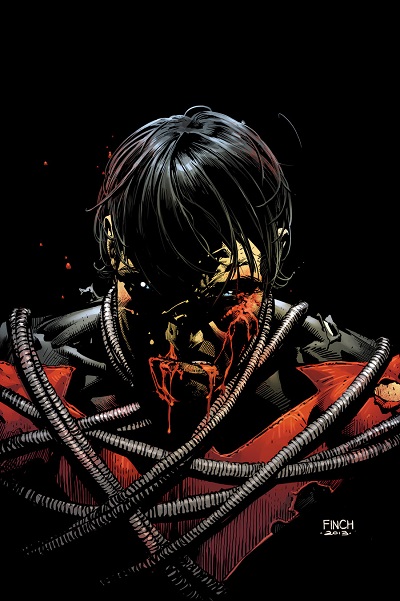 Secrets are revealed and villains triumph over… other villains in the “Forever Evil” #6, the penultimate chapter in DC’s latest event. 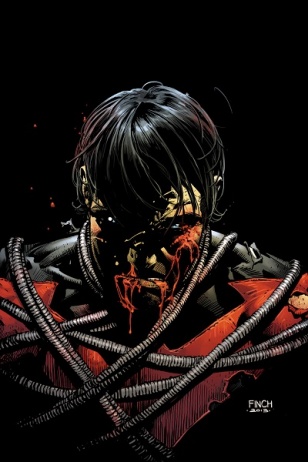 The final fate of Nightwing! The most unlikely of allies have set the Crime Syndicate in their sights — and they’re playing for keeps while the life of a hero hangs in the balance! Plus, the identity of the mysterious man in the hood is finally revealed!

After six months of fallout from the Crime Syndicate’s invasion of Earth-Prime, the “Forever Evil” event is finally nearing its close. Lex Luthor and his makeshift Justice League are ready to take on the Syndicate and go on the offensive, with a grumpy Batman in tow. They head to the remains of the Justice League Watchtower, which was blown out of space and crashed into the eastern seaboard. Their plan goes almost immediately array, as the members of the Syndicate arrive for an all out brawl. In the midst of the fighting the sort-of heroes discover the unmasked Nightwing and the Syndicate’s own secret prisoner, with startling revelations accompanying both.

Geoff Johns knows how to write a team book, and “Forever Evil” as certainly proved that he is a master character juggler. There are a dozen costumed characters in this issue, and they all get their own moment to shine. Batman bickers with Luthor like an old married couple, or at least as much he did with Superman on a bad day. The rest of the pseudo-League gets fleshed with only a couple panels each. Black Manta and Captain Cold in particular stand out as wicked hardasses, the kind of anti-heroes that an entire 90’s franchise could have been based around. For long time readers of “The Flash”, Captain Cold’s actions in this issue really say a lot about the Speedsters relationships with his rogues, and the grey area between hero and villain.

The emotional thrust of the issues comes when the team discovers the captured Nightwing. While Dick Grayson was originally just tied to a chair, the conniving Grid decided to go with the literal interpretation of instructions. Now Batman finds his former partner strapped into the conveniently named Murder Machine, a device designed to hold Doomsday, with a bomb wired into his heart. If Nightwing is still alive in another minute, the bomb will explode. This is the choice facing Luthor and Batman, two characters with opposite yet equally strong convictions. Johns paints the characters into a seemingly impossible situations, and it’s clear which choices they will make.

On a side note, the big reveal of the prisoner’s identity is something of a double shocker, Johns uses this twist to change the perceived status quo of the story. Without spoiling the reveal, it provides intriguing implications regarding the events that took place on Earth-3, while throwing a serious wrench in the plans of the Syndicate and the League. It’s easy for big twists to be groan inducing shock-for-the-sake-of-shock ventures, but Johns impressively makes this feel like an organic part of the story.

David Finch certainly has the talent to draw such a big event, and this issue plays into his strengths in a way the earlier issues did not. Finch’s style is fairly dark, with thick lines and plenty of shadows. When the early issues had scenes outside in the day, everything had a constant sun-setting look. Now, as the story reaches its grimmest and grittiest, the art feels very appropriate. The action scenes are beautifully rendered, and surpassingly graphic. Captain Cold’s actions are particularly brutal, and the art contributes greatly to the shocking violence and its aftermath. It manages to remain just on the right side of tasteful, without feeling exploitative.

A criticism David Finch often receives is that his faces sometimes lack emotion, but that doesn’t really come into play in this issue. The primary emotions on display are anger and grim determination, which Finch is perfectly capable of rendering. This is the DC prestige event for the year, and the art certainly rises to meet that pedigree. Everything is detailed and fleshed out, without statuesque looking characters or confusing layouts. Despite the fact that there are a dozen characters crammed together in dark rooms, it’s always clear what is going on, and who is making ambiguously moral decisions.

“Forever Evil” #6 features big reveals as the event heads towards the grand finale. Geoff Johns displays his considerable talent with economical and equal opportunity writing. Everyone gets their moment to shine, and Johns only needs a few lines to establish their basic character traits. David Finch produces art worthy of a universe altering event, and the issue greatly plays into his strengths for all things darker and grittier. The issue finally provides answers to longstanding questions in a way that actually feels natural and not shoehorned in, while still leaving plenty for the big finale next month.

Final Verdict: 8.5 – Buy. Johns and Finch are a great team, and everything points towards the end of “Forever Evil” being worth the months long wait.