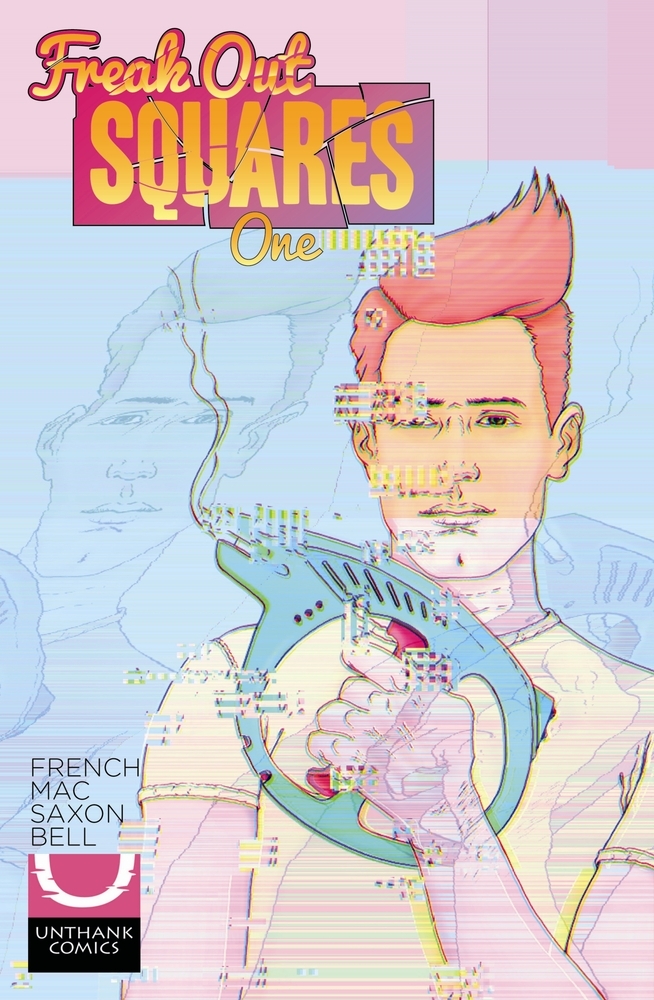 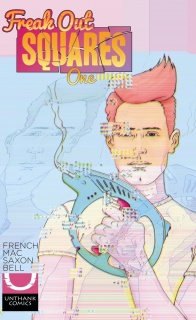 Following the exploits of a young man who is crushed to discover that his hero – cosmic rock god Johnny Orion – is not the idol he was promised, Freak Out Squares is sugar coated cynicism. An ultra-colourful series of Pop comics, with everyone involved producing stellar work.

“Freak Out Squares” #1 is a refreshing blend of old and new. On one hand it feels like the type of early Vertigo book we might have seen from the likes of Grant Morrison and Frank Quitely. The book’s graphics and iconography feel like they were lifted squarely from early 90’s sitcoms. On the other hand, the book rides squarely atop the zeitgeist, with its finger on the pulse tapped by Image books like “Zero” and “Sex Criminals.” If that isn’t a strong enough recommendation to check out this book, then please, feel free to read on.

“Freak Out Squares” #1 is the start of a four issue miniseries about Johnny Orion, a funktastic lyrical guru/socio-economical revolutionary who is changing the world one well crafted rhyme at a time. Actually, that’s not what the book is about at all. That was just a front for the truth, which is what this book is really all about.

The real story behind “Freak Out Squares” is that of one disenfranchised fan who discovers his idol is little more than a puppet for the very forces he’s set up to oppose. It’s a heavy book, juggling themes of music as propaganda, idol worship, government conspiracy and underground revolutions.

However, even with the weighty subject matter the book flies by a blistering pace, so much so that I felt the need to double check the page count upon the issue’s conclusion. The brisk pace can likely be attributed to the quick, snappy dialogue, along with the emphasis on plot progression and world building over establishing characters. French gives very little information regarding our protagonist, and only slightly more about the antagonistic organization that spawned Johnny Orion. The result is a story that feels unique and exciting, but without a strong anchor to ground the reader’s interest.

Carrying you through these pages is artist Garry Mac. Mac’s work is highly reminiscent of previously mentioned fellow Scotsman Frank Quitely. It’s hard not to look at several of the characters in “Freak Out Squares” #1 and think “Leo Quintum!” This is largely due to Harry Saxon’s manic technicolor palette, with neon greens, pinks, and blues popping off the page. Saxon’s colors, while extremely vibrant, feel artificial at times, lending a plastic quality to the images.

However, Mac’s work shouldn’t be written off as just Quitely-lite. While the artist’s pages are relatively low in detail, with sparse backgrounds, he demonstrates a clear knack for perspective and composition. For instance, on brilliant sequence plays out across a double page spread depicting a large laboratory facility. Two characters converse as they move across the page, begin in the top left back ground, moving right across the page with the dialogue. Then moving down the page, by taking an elevator, obviously, the characters transfer to the foreground, moving back towards the left page, completing the cycle. The technique makes great use of the large page space, giving a sense of depth and life to the environment.

Now for the bad news; if you’re not in the UK, you’re not going to have the easiest time getting your hands on this book. While it can be purchased here, the shipping and conversion rates brings the cost of the issue to right around $11, a steep ticket price for a single 20 page issue. To my knowledge, there are no plans for the book to release digitally. However, this is definitely a book, and a creative team, for which you should definitely keep your eyes peeled. French, Mac, Saxon, and letterer Colin Bell have created a comic book tour de force that feels extremely promising, in spite of a few growing pains.

Edit: As Mr. French kindly pointed out in the comments, a digital version of “Freak Out Squares” #1 can be purchased here. So, everyone can ignore all the hubbub about price barriers and enjoy the book!