The most perplexing of the Next Wave titles, “GI Combat” is the latest war comic from DC. Just last month, DC gave the axe to “Men of War” and “Blackhawks,” two war books that didn’t sell very well or engender a passionate fanbase. And so, in their desire to keep publishing a war book, they scrapped both books, which had specific points of view, for an anthology title that could, hopefully, bring in a larger audience. 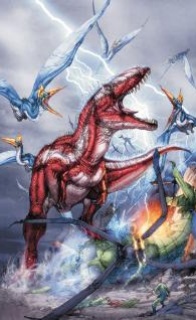 First issue of an ongoing series!- Featuring the first chapter of “WAR THAT TIME FORGOT” written by J.T. KRUL and with art by ARIEL OLIVETTI….and dinosaurs!- Plus: The first chapter of “UNKNOWN SOLDIER” by JUSTIN GRAY, JIMMY PALMIOTTI and artist DAN PANOSIAN focuses on all-out war in Afghanistan!

The first story in the book is a modern retelling of ‘The War That Time Forgot’ by Krul and Olivetti. For those who aren’t familiar with the property, it can be summed up as soldiers versus dinosaurs. This sounds awesome, of course, but this story isn’t quite as ridiculous as it sounds, and that is a real shame. With a premise this insane, you really need to go all out and embrace it. A great example of this is one of the recently cancelled DC books, “O.M.A.C.” The concept, originated by Jack Kirby, was not taken in ahip, new direction, nor was it softened – it was presented as an over the top concept, and the book’s success (critically, if not commercially) was due to it being an over-the-top, fun book. And dinosaurs versus soldiers could be a concept that similarly lead to fun stories.

But it is hard to do that when your two main characters see pterodactyls and act coy about it.

“What the hell are those things?”

Sorry, but even though I’ve never seen a trolley driven by a cocker spaniel with an eye patch floating across the ocean, if I saw one, I could identify it. Eventually, they come clean with each other and admit “hey, those are dinosaurs,” which they should’ve done in the first place. I spent the first few pages thinking that this book took place in an alternate universe where people don’t learn about dinosaurs which, truthfully, would be a more interesting book than what Krul has penned. Krul’s work in the past has not been my favorite, but I have to give the guy credit for going for it (ahem.). Here, he doesn’t go for anything – he lays out every detail in the way you’d expect him to, without much flare or style. “Oh. Hey. Dinos.”

Olivetti’s art is unsettling in its blending of photorealism, digital sheen and exceptionally wide-mouthed screams. His art looks sharp one second, awkward the next, and almost funny a panel later. His style is unique, and I have enjoyed some of his work in the past, but this is a perfect example of an artist being mismatched to subject material. His dinosaurs and settings are of a much higher quality than his people and, sadly, between his odd-looking soldiers and Krul’s shallow characterizations, the humans are forgettable mere seconds after meeting them.

Ultimately, very little happens in this opening chapter. But, you know, dinosaurs, so we’ll see what next month entails.

The second story in the book is ‘The Unknown Soldier,’ written by Gray/Palmiotti and drawn by Panosian. Another classic DC war property reimagined for this book, this second feature (but not a backup – both stories are just about the same length) tries to anchor its main character to reality. They do this by having his family perish in the 7/7 Bombing in London, and it works; having an origin that people can identify with makes you root for, who is basically, an insane vigilante avenging the death of his family. Sound a little familiar?

Of course, Batman this isn’t, since the Unknown Soldier will kill you as much as look at you, and does so across Afghanistan, after going on his own training mission, and wrecks havoc across Afghanistan before the Army finds him and enlists him. Actually, that is all pretty Batman-ish. Panosian channels the Dark Knight as well, by having T.U.S. hide in the shadows, showing just his eyes and teeth before striking. Panosian does a pretty good job keeping the book gritty without devolving into pure action chaos.

Incidentally, not much happens here either, but not much happens in an “this will pay off later on” way, and I’m typically more sympathetic to that than I am a straight up boring issue. I think this could become an interesting story, especially depending on where he gets dropped off next.

Overall, I applaud DC for wanting to keep a war book on the shelves, to diversify their product. However, after reviewing both this and “Men of War,” I’ve come to the conclusion that war books just aren’t for me. I’m not blind to the ridiculous tropes identified with superhero comics, but I enjoy those tropes. When I see the typical war tropes, it turns me right off (although “Men of War” was much guiltier of this than “G.I. Combat” is). Sergeants calling their underlings “girls,” the always present homophobia, “hoo-ah,” etc.

I also think the anthology format works best for this type of book, and it allows properties like ‘The Haunted Tank’ to get introduced in the future, and who knows: maybe “Blackhawks” will come back as one of the features in the future. That said, $3.99 is a lot to pay for a book without a familiar face on the cover. Instead of 40 pages at $3.99, both stories could be trimmed by a few pages to achieve the $2.99 price point. I hope their definition of war stories expands a little – I would totally buy the book if one of the stories was about the Rann/Thangar War! I’m only half kidding, DC.

If my suggestion a cosmic battle in “G.I. Combat” didn’t tip you off, this isn’t my type of book. But I said the same thing about “I, Vampire,” which i now adore, and it is what I said about “Starman,” now my favorite comic of all time. This book has potential, but until I see anything worth a $4 look on the cover, I’ll continue to pass on it.

Final Verdict: 5.7 – Browse (and wait for the Haunted Tank!)