This week, IDW Publishing shook the Joe-verse up again with the all-new “G.I. Joe” #1, and this time, they’ve brought fan-favorite writer Fred Van Lente and artist Steve Kurth along for the ride. Is this the can’t miss, G.I. Joe comic we’ve all be waiting for?

Well, yeah. I’m pretty sure it is. 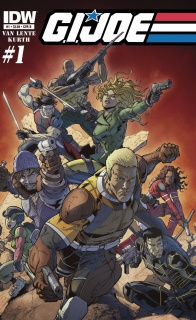 YO JOE! The truth is out: the world knows the G.I. JOE team is real. Now Duke leads his squad directly into the public eye, confronting COBRA on American soil! The best of the best just got better, as Fred Van Lente and Steve Kurth lead the charge and we roll out one new G.I. Joe title a month for the next three months!

As a concept, G.I. Joe can get pretty weird.

There, I said it.

But look, it’s equal parts war comic and superhero team book, with enough toy commercial crazy tossed in to both hold it together and tear it completely apart. It’s a nothing makes sense/everything works approach, originally built around finding a way to sell more toys than Star Wars. Don’t believe me? Then clearly you haven’t read many G.I. Joe comics. Open any issue of the classic Marvel series, and you’ll likely find an epic ninja battle, androids fighting soldiers on the moon, or a drug enforcement task force defending New Jersey. And that’s all in the same issue.

Which brings me to my point: Fred Van Lente is the perfect guy for G.I. Joe.

Few comics writers working in the business today are able to do what Van Lente does. Over the years, he’s been saddled with being “the funny guy” writer, and while that’s not totally wrong, it’s mostly because good humor is so rare in mainstream comics today, that he can’t help but stand out from the crowd. But Van Lente is deceptively good at this comics thing, and you need only read his Marvel books, Taskmaster, or Power Man & Iron Fist, or his current work on Valiant’s reboot of Archer & Armstrong to see that inventive plots and strong characterization work are his greatest talents. The laughs are just icing on the cake.

But we’ll talk more about what Van Lente gets right in a minute. Right now, you’re  probably all wondering what this new G.I. Joe is about, and if it’s new reader friendly or that kind of thing, right? Okay, at the end of the ongoing series that directly preceded this one, G.I. Joe had been exposed by Cobra to the world at large. That’s about all you need to know going in. Now, instead of being a covert military unit, they’re America’s publically-recognized, highly-trained special missions force, and the new status is pretty jarring for the team. Most especially for the Joe’s field leader, Duke, who’s none too at ease with being the new, public face of G.I. Joe. But with the help of your dad’s G.I. Joe, General Joe Colton, Duke puts together a perfectly diverse field team made up of some old favorites, like Cover Girl and Roadblock, with a few fresh faces thrown in, like an all-new Doc, and tag-along combat journalist,  Codename: Hashtag. And would you look at that, the team comes together just in time for Cobra to crawl out from under a rock, right smack dab in the middle of the Ole USofA. 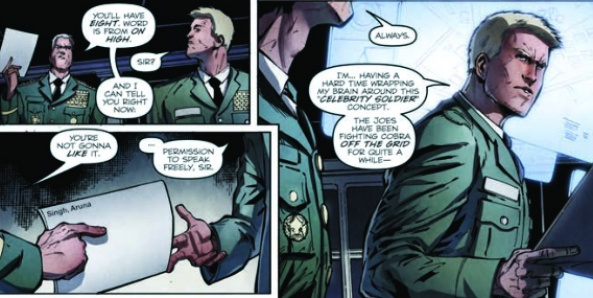 And with that, right out of the gate, “G.I. Joe” #1 feels a lot like it’s IDW’s take on the Marvel NOW formula. Other than the name of the book, Van Lente’ G.I. Joe has very little in common with previous writer Chuck Dixon’s approach to the series. Sure, it’s still a story about soldiers, but it’s very much the comic book version of soldiers. And while I would never deride any previous contriubtions to the IDW era, since its return to comics back in 2008, G.I. Joe has leaned a little hard into the more realistic aspects of the franchise instead of embracing, oh, I don’t know… Destro. This first issue feels like a correction in terms of tone, and seems more comfortable with being a comic inspired by a toyline than it did before. Don’t get me wrong, I’m not saying I want Van Lente to bring back the Eco-Warriors, but it’s certainly nice to see someone having fun with Shipwreck and Tunnel Rat. It’s been a while.

Of course, new series artist Steve Kurth is no stranger to G.I. Joe. He was the original artist on Image/Devil’s Due’s G.I. Joe resurrection back in 2001, and I’m happy to say the years between then and now have worked in his favor. These days, Kurth’s got a solid, and somewhat lighthearted style, and it matches the tone of the book, but manages to never undersell the more dramatic moments of the story. He’s a creative storyteller, and while several spots in the issue felt a little crowded, he gets a lot done in 22 pages. I do have to admit, though, while some of them look better than others, I’m not sold on his costume redesigns yet. Especially Quick Kick’s. I mean, YES, Quick Kick should probably have a shirt on when he dives into a warzone, but does he have to wear that one? Kurth, however, does a fantastic job updating the Skystorm and making the Cobra Maggot seem pretty formidable. 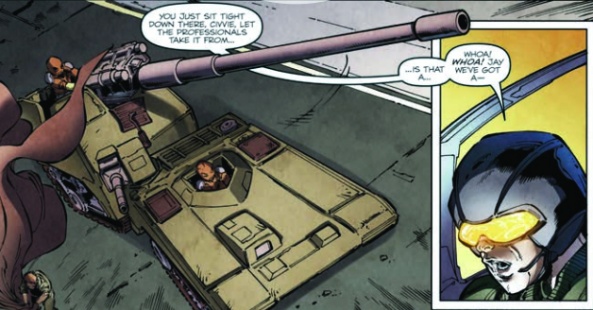 With this G.I. Joe relaunch, Van Lente and Kurth aren’t just inheriting the previous series, and they don’t seem content to play it safe. They look to be wasting no time, and are set to take the property in a bold new direction, and I’m thrilled they’re off to a great start. I’m hooked. Of course, I’m the target audience… but whether you’ve read G.I. Joe all your life, or someone who enjoyed the cartoon growing up, or better yet, if you’re just a guy or a gal who enjoys the hell out of good comics, this new G.I. Joe feels like it’s got a little something for all of us. Except for Raptor. I guess it doesn’t have Raptor yet.

Final Verdict: 8.5 – Buy. Because buying is half the battle!

Welcome back to G.I. JOEversity, a regular look at IDW’s G.I. Joe comics, and all the goings-on in the world of everybody’s favorite Real American Heroes! This time out, we’re looking at all three of IDWs titles, beginning with the finale to Joe-newcomer Fred Van Lente’s first arc, ‘Homefront’. And after a few months off, […]

Hey there, Joes, and welcome back to G.I. JOEversity, Multiversity Comics’ regular look at all things G.I. Joe! You might’ve noticed we took last month off, but we more than make up for it this time around with! In our triumphant return, we’ve got “G.I. Joe” writer Fred Van Lente’s commentary on not just one, […]

This month saw the release of “G.I. Joe: The Cobra Files” #1, the final title in IDW Publishing’s latest relaunch of their G.I. Joe comics (preceeded by “G.I. Joe” and “G.I. Joe: Special Missions”). Like the titles before it, Cobra Files adds a distinctive and impressive voice to the reborn Joe comics universe, but does […]