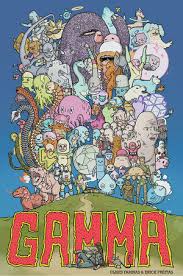 There are some books that when you’ve finished them, give you the assurance that the story is going to be one people will talk about, or start to talk about, very soon. “Gamma” is one of those books. Read more below the cut! 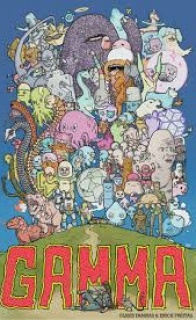 Dusty Keztchemal is a pathetic coward. He failed the entire planet, and now, the only way he can make a living is by getting punched in the face for money. But when a beautiful stranger wanders into his saloon looking for help, Dusty thinks he can conjure up the man he once was—the greatest monster trainer in the world!
• The first original story from Catalyst artist and rising star Ulises Farinas (Transformers: Heart of Darkness, Glory)!
“Hilarious, awesome and hilariously awesome.”—ComicsAlliance.com

There is an incredibly thin line between homage and parody. If you make the story too reliant on the source material, it just becomes derivative. So when a book comes along about a washed up middle aged monster trainer, it’s easy to think  that “Gamma” is just one of the trillion Pokemon parodies that have spawned from the last fifteen years of the internet. However, those elements never really come into play  until somewhere near the middle of the one-shot. Before that you meet Dusty Keztchemal, the world’s biggest coward and Ash Ketchum gone completely wrong. You meet this man, who he is, the type of man he is, before you see any thing relating to pocket monsters. And when the monsters show up, when you make the connections to Pokemon, you make a realization. This isn’t the Pokemon story you’ve been waiting for.

This is the Gamma story you’ve been waiting for.

As Ulises Farina’s first creator-owned work, along with co-writer Erick Freitas, it’s a great introduction to the creator as he is truly gifted. The plot here is equal parts absurd and profound. Something happened to make the world’s best monster trainer quit and spend his days in a bar re-enacting The America Play. Then a hysterical dame walks into the bar and what you would expect to happen happens. This story is presented alongside the backstory for Dusty and the “Gamma” world itself in a worst-case scenario of what the seventh generation Pokemon game will be. It’s a heartbreaking tale and the only thing that’s really wrong with is is an unexpected return. Unexpected returns aren’t anything new to comics, but this one never really gets any type of explanation. That doesn’t take away from the story at all however. It only means that if we don’t get a mini or ongoing series from this one-shot to further elaborate on the world of “Gamma”, blood will be spilled.

Speaking of spilling blood, Farinas’s art is also another definite reason why “Gamma’s” story should continue into an extended series because, in all honesty, it’s just impressive. Before actually opening the book, I just stared at the cover for a good five minutes. It’s gorgeous. The designs for the monsters are inventive, cute, and at times grotesquely interesting. The expressions in the human characters are often priceless, especially Dusty after a hard day “working.” Some artists, no matter how good, could have a fill-in artist who’s just as good but with “Gamma” Farinas’s art perfectly matches his story. The atmospheres, the acting, the designs, all of it works so well to bring forth this spectacular vision, shared with Erick Freitas. All in all, the art looks like the childish colors and Adventure Time-style imagination one would expect from a pastiche of a Nintendo game, but it’s grounded with a darker, “real-world” tone that doesn’t bring the story down with overt cynicism, but grounds it with a foundation for the humor to sprout from.

Overall, “Gamma” is a comic that you should absolutely buy whenever you can. Buy it so that you can experience one of the funniest, most heart-felt, stories of the year. Buy it so the sales will warrant further stories. Buy it for one of the most inspirational last pages to ever grace a funny book. “Gamma” is parody done right. Like “Young Frankenstein” or “Blazing Saddles” there is definitely a direct source of inspiration, several when you count in “Gamma’s” easter eggs, but the actual story within is so solid that it uses the source material as a base, not a crutch. “Gamma” is one of the most beautiful, funny, and fun books of the year and you’ll want to pick it up before everyone and their grandma starts talking about it.