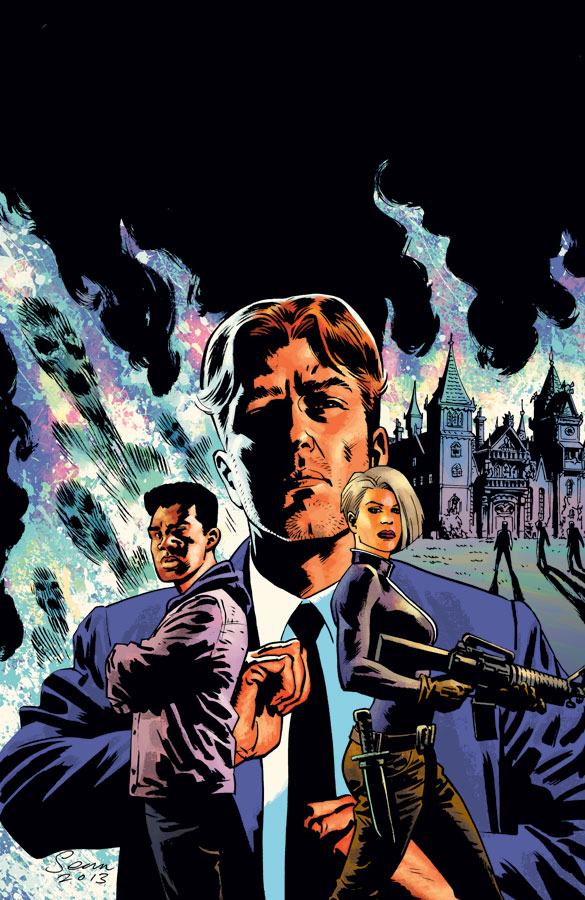 “Ghosted” #1 from Joshua Williamson and Goran Sudzuka is every bit the pulpy thrill-ride promised by a series centering on a supernatural, ensemble heist. Well executed from start to finish, this first issue makes use of pristine pacing, laying the foundation for a story that will grow more complex and intriguing with each turn of the page. 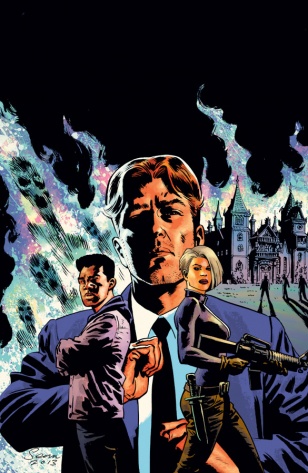 A HORROR/CRIME MASHUP THAT’S EQUAL PARTS OCEAN’S 11 AND THE SHINING. Jackson T. Winters is one of the greatest criminal masterminds to ever live… except he’s rotting in jail after his last, doomed score. But when a filthy rich collector breaks him out, he’s tasked with putting together an elite team of paranormal experts to do the impossible: Steal a ghost from a haunted house of horrors!

“Ghosted” introduces readers to Jackson T. Winters, a highly skilled thief whose luck has run out. Opening in a prison, that seems a hell on earth, this issue waste no time giving readers insight into its characters. we learn that Jackson has been incarcerated, and the only thing he seems to be looking forward to is the eventual reprieve of death. The bleak beginning serves as a strong anchor in reality as the story eventually shifts to the realms of phantasmal, sumptuous flights of fantasy. The rakish central character helps establish the tongue and cheek tone of the series. Williamson allows Jackson to be shallow and flawed but grants him the charisma to mitigate those seemingly negative qualities. He is likable and relatable, even when he is at his surliest.

Through the events of the story, Jackson finds himself assembling a team to rob a house of one of its haunts, this is where the real fun begins. The strong character work that went into the central figure is applied to each and every subsequent member of the cast. Varied and recognizable, the wide array of supporting characters deliver an feeling exciting possibility. No two members of the team have the same motivation or set of beliefs, making them a perfect vehicle for conveying readers through the sensational, supernatural labyrinth of story ahead. Never letting the audience feel completely comfortable trusting any one character, Williamson constructs layers of deception that add to the mystery of the series.

Compared with the characterization in this issue, the pacing is equally well crafted. Expert exposition, and narrative movement so tight that you could bounce a quarter off of it, are evidence of the talent fueling this new series. The plot never drags, every panel matters, and a beautiful balance is struck on each page. In the pilot issue of Ghosted, we meet a character, learn about his situation, see him removed from that situation only to be introduced to another convoluted scenario, find out a little about the main character’s history, learn about his mission, watch him assemble his team, and find out just what the group will be up against in future issues. The amount of information conveyed in the pages of this book is staggering, yet it never seems heavy. The weight of the story is propped up with strong visual elements and a deft sense of economy. Never dwelling too long on a single idea, the rhythm of the story functions like the quick cuts of an action movie, keeping the reader’s interest while conveying a great deal of important information.

The beautiful technique used in this book is not limited to the written elements. Artwork by Sudzuka swirls with moodiness, capturing the interpersonal tensions and the internal states of the characters with grace. Each of the settings used in this book are detailed and comprehensive environments that lend their own unique qualities to the story. The prison is austere and chaotic, creating a feeling of isolation and uncertainty. The parlor of Markus Shrecken, the patron commissioning this heist, is a shrine to the bizarre; ornate furnishings and rich details lend to the character’s air of mystery and seeming eccentricity. Finally the Trask Mansion, the haunted house central to the plot of “Ghosted,” brings to life all the campfire ghost stories and urban legends that introduced us all to the horror genre as children. The mood ring color palette offered by Miroslav Mrva makes the actions and reactions depicted so well by Sudzuka find an emotional resonance, and makes it easy for the audience to interpret the intended tone of each scene.

“Ghosted” is successful because of its bones; in fact, this series is a study of skeletons. The skeleton of the story, or its structure, is sound and sturdy. Skeletons also come into play as reminders of things that go bump in the night. The humor found in this first issue is bone-dry. Without a doubt this complex cast is sure to have their share of skeletons in the closet, and more than one bone to pick with one another. All this comes together to give the impression that this series is going to be a viable title, well worth exploring.

Sam resides in Louisiana, and has a twang in her voice, even when her words are in print. Her first crush was Burt Ward. She reviews comics, writes features, and co-host podcasts at imageaddiction.net. She also blogs about comic books from a feminist, literary perspective at comicsonice.com You can find her on twitter @comicsonice where she makes inappropriate jokes and shamelessly promotes her work. Other than comic books, her greatest passions are applied linguistics and classic country music. She enjoys quality writing implements, squirrels, and strong coffee.