After reading issue #1, I was interested enough to check out a second issue of the new “GI Joe” ongoing, which was already something of a shock to my system. Would I be coming back for a third taste? 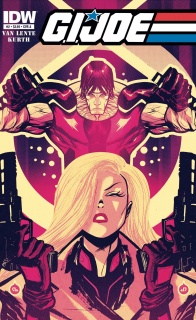 HOMEFRONT! The G.I. Joe team battles Cobra to the death on American soil! COVERL GIRL, DOC, and the newest member, HASHTAG (yes, HASHTAG) have been separated from the rest and have to fight their way through hundreds of kill-crazy COBRA sympathizers—with a teammate’s life hanging in the balance! Plus: The BARONESS has DUKE in her clutches. So why isn’t DESTRO happy about that?

I am not, by any means, a big “GI Joe” fan – that title belongs to my good friend and GI JOEversity scribe Chad Bowers – but something that feels odd, brilliant, and strategically important to this series, happens at the beginning of the second issue: Cobra makes a lot of sense.

Cobra comes off sounding like a more militant, evil version of the Occupy movement. Their message is simple: if the system has failed you, you no longer need to play by the system’s rules. That is how Cobra got an entire American city on their side: damn the government, damn those set out to “protect you;” they’ve only been holding you down. Cobra will set you free!

Of course, they’ll do it through evil, horrible ways (the Croc Master basically fed the mayor to his pets), but you’ll be free of oppression! Or, at least one specific form of oppression…

This is what you get when you let a subtle, thoughtful, nuanced writer take on what can be a very broad franchise. Fred Van Lente really brings shades of grey into this book, and it is all the better for it. You can really see the point of view of the Cobra-assisting civilians, and not only can the reader see it, but the Joes can too. They are trying to do all they can to keep the mass of people safe, even if it means occasionally taking out one of them if need be. This is a tough line to walk, and it isn’t always handled perfectly, but the attempt is valid and interesting. Van Lente’s writing doesn’t seem like it is a natural fit for this comic, and that is precisely why it works so well.

That is to say that this is totally some new direction for the series – there is still a lot of corn here – but corny moments are part of the fun, aren’t they? Even though it is said quasi-sarcastically, there is still a “yo, Joe” said in this issue. There is still a dude named Quick Kick. These may not be quite as rah rah pro-military as we’re used to seeing, but they aren’t exactly putting flowers into gun barrels, either. There is still an undercurrent of military righteousness present, but far less than I would expect.

Because I co-host a weekly podcast with the aforementioned Mr. Bowers, I know more about GI Joe as a 30 year old than I have at any other point in my life, and so I get a few of the subtle references here (such as Doc referring to her joining the army as a “family thing”) that would have flown right over my head a year or two ago. And that’s ok, because Van Lente isn’t obsessively referencing the past. There are a few nods and winks, and that is fun, but the comic never veers into nostalgia trip completely, and that is a very good thing.

Steve Kurth’s artwork here is enjoyable, if a little expected. As I stated in our GI JOEversity roundtable, I would have liked to see an artist as outside the box as Van Lente chosen for this book, but Kurth keeps a thread between classic Joe and this book through his artwork. There is nothing so egregiously bad as the “pin up” final page of the first issue, but there are also few moments of real amazement to be found in his work. It is solid enough, it does the job, it looks nice, but nowhere is there a true “wow” moment.

And, to be fair, that is sort of how the entirety of the issue is, outside of an incredibly strong opening. Once we get past page 10, the book slips into a sort of by the numbers “team is separated” stuff, and characters are given little moments, but those moments don’t add up to all that much, sadly. There are a lot of elements found in this book that set it apart from what my personal expectations for a GI Joe comic should be, but there aren’t as many moments that transcend a standard, slightly above average comic. IDW is clearly following a plan with their Joe books, and I applaud that, but for this jaded comic reader, the plan isn’t quite new enough.

However, the book is solid enough that I’ll finish out this arc, and possibly even start a second one, to see if the steam picks up a little. And if you had told me that even six months ago, I’d never believe you.