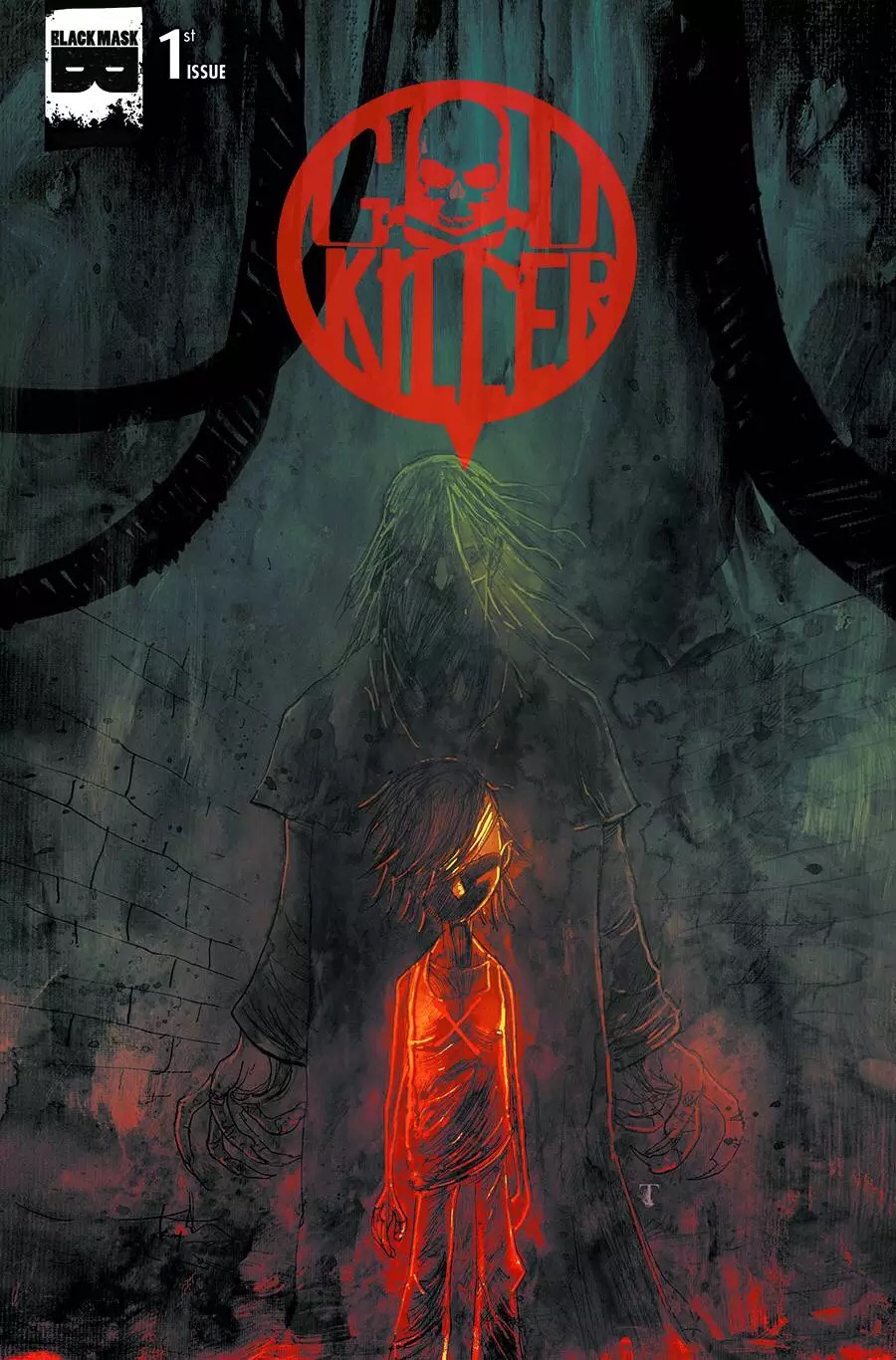 A world with air so polluted, to breathe cleanly one must wear a gas mask. Where only a few live in comfort and safety, always under a watchful eye. Where the selling of flesh and consumption of blood has become a necessity to survive. Come, join us as we delve deep into the dark and brutal world of “Godkiller: Walk Among Us” #1. 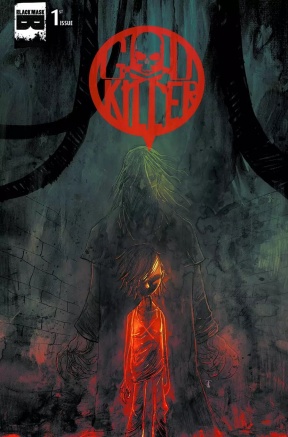 Written by Matt Pizzolo
Illustrated by Anna Wieszczyk
Described as Saga meets Johnny The Homicidal Maniac, Godkiller: Walk Among Us is a twisted sci-horror adventure about a boy’s search for a new heart to save his dying sister in a post-nuclear wasteland populated by fallen gods, sex magic, and quantum physics technowizards. Based on the cult hit animated series starring Davey Havok (singer AFI), Lance Henriksen (Aliens), and Nicki Clyne (Battlestar Galactica).

“Godkiller: Walk Among Us” #1 is a strange and elusive beast. In my time reading and reviewing comic books, I think I can honestly say that I have never encountered a comic book such as this. Written by Matt Pizzolo and illustrated by Anna Wieszczyk, “Godkiller: Walk Among Us” is a beautiful and disturbing blend of post-apocalyptic science fiction dystopia with a sprinkling of horror and comedy and drama all put together in a package that takes a long, dark look at the human soul. Originally created and released as a motion comic a few years ago, “Godkiller” has transcended mediums and broken boundaries and now comes to us in the form of a print comic as published by Black Mask Studios. Black Mask is a publisher that seemed to come out of nowhere with the intention of bringing back the independent, guerilla publishing of the original underground comics movement and with “Godkiller: Walk Among Us”, that’s an effect they have achieved in spades.

I feel like it should be established up front as much as possible that this comic is not for the faint of heart. This is a brutal depiction of a dystopia that even had me feeling uneasy at times and I like to think I’m rather immune to that at this point. But, as Matt Pizzolo put it, this is a “mythology for the fuck-ups” and as such it is a rather unflinching look at the lives of those of us who are less than noble and forced to do less than noble things to survive. There is violence, sex, swearing, organ harvesting, prostitution and more on almost every page of this comic. And yet, there is a certain level of beauty in the harsh look it takes at our world.

For fans of artists like Ben Templesmith, Damien Worm, Marco Rudy, Dave McKean or even David Mack, there is another artist to add to your watch list. Anna Wieszczyk is an artist I have never encountered before, but I will be sure to keep a close eye on her work. Draped in blackness and shadows, Wieszczyk’s artwork brings atmosphere to this book by the bucketload. Her linework is sparse amd harsh, feeling scratchy amd harried that builds a texture, rough and coarse and abrasive, to the page. Her panels either focus on a close-up, offering only the most important details of the world to the reader, or employ wideshots in which characters are little more than silhouettes against the encompassing shadows, using harsh warm and earthy colours to highlight aspects of the setting and characters in a sort of post-punk chiaroscuro. Her character work, however, seems to have an almost manga-style influence: characters are gangly and sharply proportioned that contrasts with the colouring of the book to bring a childlike nature to the characters in this brutal and mature world.

Anna Wieszczyk paints a beautiful picture of this world that she and Pizzolo have created, but it is not beautiful in the conventional sense. This is the seething fuck you to the idea of art processed for mass consumption that the comic book industry has survived on for decades. Even Marvel, with their newfound focus om bringing creators’ styles to the forefront of their books want everyone to be able to pick it up and potentially enjoy it. This is not that kind of book. This is the comic book equivalent of death metal, grunge and punk all wrapped up in a bow that says fuck you to the socially comditioned norm. This is a niche comic, through and through, and it will not be for everyone. But, honestly, I loved it.

A large part of why I loved it is because of Anna Wieszczyk’s artwork, but Matt Pizzolo’s writing brought so,ething entirely different to the book. While Wieszczyk’s artwork is in your face with style, Pizzolo’s writing is a little more subtle in how it builds the world of “Godkiller” throughout this issue. Each page reveals a new detail, a new piece of the puzzle, about this dystopia that slowly, over the course of the issue, crystalises into a view of the world. To get to that point, Pizzolo and Wieszczyk tell two different, connected stories in this issue that show both sides of the world that these characters live in. We get a glimpse of the harsh, lawless wasteland of the outside and the overbearing, sterile world of the Republic. This is a dystopia that reflects back at us the inadequacies of our world as it is now and what Pizzolo and Wieszczyk see in that reflection is a world destroyed by the hubris of the powerful which forces the vulnerable to do awful things to survive.

“Godkiller: Walk Among Us” #1 is a harsh look at ourselves and our world in a brutal, beautiful and unflinching comic. Matt Pizzolo and Anna Wieszczyk really have created a mythology for the fuck ups by bringing that sense of anti-authoritarianism that seeds the putpouring of rage and frustration in punk music to a comic book. The artwork is gorgeous in a way that defies conventions and the writing is subtle and sparse, showcasing the lives of people in the worst situations imaginable and showing that this dystopia they have created isn’t actually all that different than the world we live in now. This comic is not for everyone. If you are like me and you can connect with the passion of release of frustration at the world in Pizzolo’s writing and Wieszczyk’s artwork, then you will likely love it. If not, then are more than enough comics out there for you. This just isn’t one of them.

Final Verdict: 8.9 – Like I said, it’s not for everyone, but this really spoke to me in a lot of ways. Do not miss this.