As the first year of “Green Lantern” wraps up, it is amazing just how different this series feels than it did pre-“Flashpoint,” despite not ditching its mythology like so many other series did. Sinestro has been the focal point of the book thus far, and with Hal Jordan relegated to sidekick status, it has reinvigorated a book that had stalled out a little last year. How does the penultimate chapter in this first year (an Annual is coming out at the end of the month) fare with the rest of the run? And be warned, spoilers are discussed within. 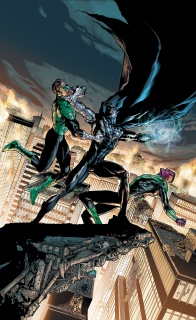 – BLACK HAND has been freed from the INDIGO TRIBE, and now he’s more powerful than ever! – What horrible plan does he have in mind, and to what lengths will Hal Jordan and Sinestro go to stop it?

Time is an elastic thing, especially in comics, and while it may feel like only yesterday that Black Hand was raising the dead in the name of Nekron, ‘Blackest Night’ started three years ago already. So, while it may feel like Geoff Johns is going back to the well here, it has been some time since Black Hand was a major villain. And not only that, this story, in a way, spins directly out of ‘Blackest Night,’ where the Indigo Tribe took Black Hand after the conflict ended. By waiting all this time for both the resolution to that story and to reveal the true purpose of the Indigo Tribe, Johns has let both stories gain importance and be something so rare in the New 52: a well set up story that pays off.

And even though he has only been the Green Lantern of Sector 2814 for a little more than a year, Sinestro has been one of the most evolving characters in all of comics in the past few years. In Johns’ hands, Sinestro truly has shined and transcended his sometimes lame Silver Age appearances. Sinestro, once absolutely single minded and predictable, has become one of the more fascinating characters in the DC roster, as he is showing signs of good underneath his evil exterior, and in doing so, has become a character people are begrudgingly rooting for. Johns has done a masterful job painting Sinestro as a character with both great qualities that eventually corrupted him, and a character with flaws that may be his eventual salvation. In this issue, he willingly destroys his Yellow lantern to stop Black Hand’s army of undead. And while he says he could always forge another lantern, there appears to be a sense that Sinestro is doing what he feels is necessary to prevent this terror from growing worse, no matter the cost. Does that sound like a villain’s motive?

This issue acts as a prelude to both the Annual coming out at the end of the month, as well as the October/November crossover, “Rise of the Third Army.” The Guardians have a nice bit of exposition as to how their plan is coming together, starting with giving Sinestro a Green ring, de-powering Hal, exploiting John Stewart’s guilt and Guy Gardner’s ego, and to use Kyle Rayner’s fondness for Ganthet against him. While crossovers might not be the best way to tell a story, this inter-line event is being set up well, with roots over two years old taking ground and making the story seem important, in part because of its gestation time (sounds familiar, doesn’t it?). But the other big dangling question going into the annual is – what happens to Hal and Sinestro? The #0 issue features Baz, the new Green Lantern featured in the DC Free Comic Book Day issue. Sinestro and Hal are absent from all solicitations through at least issue #14, although I can’t see this story ending in any way other than the two of them (or at least just Hal) returning to save the day.

Just days after our Editor in Chief Matt lauded the “Green Lantern” creative team for their consistency, we get a fill-in team of Renato Guedes and Jim Calafiore who, admittedly, do a pretty fine job keeping Mahnke’s tone, and even pull of some pretty impressive Mahnke pages along the way. There are two schools of thought towards fill ins (besides the obvious “one consistent artist is better than having fill ins”) – some people prefer fill ins, like Guedes and Calafiore, that when you squint, you can barely tell the difference between them and the regular artist. Others prefer a more distinctive style change, where the primary artist’s style isn’t represented in the fill-in issues. While I’m typically a fan of the latter, since this is falling mid-arc, Guedes and Calafiore do an admirable job keeping the book looking and feeling like the issues directly preceding it.

The nicest moment in this issue has to do with the Book of the Black. First, Black Hand is reading it and each page says simply “Hal Jordan is not your enemy,” over and over again. However, at the end of the issue, we see a new message in the book, one that Hand doesn’t want to believe: “Hal Jordan will be the greatest Black Lantern.”

This is a pretty great tease going into the Annual, and it begs the question: would DC kill Hal Jordan (again)? This idea isn’t as preposterous as it would have been a year ago; Hal Jordan has anchored a Green Lantern film, which tanked. If they want to do a Justice League movie, I could see John Stewart being the chosen Lantern, both for diversity sake and because of the popularity of the character as part of the Justice League animated series. While the line of books is still strong, Jordan is not the only reason the books sell. And, if we’re looking for clues here, Jordan is conspicuously absent from any of the “Justice League” covers solicited thus far. The “Green Lantern” #14 solicit talks about the Justice League believing Jordan to be missing, but that doesn’t mean he wouldn’t meet his maker at the end of the Annual.

I don’t think this is DC’s plan, but I do think that they have put themselves in a position where people are legitimately asking if they’re going to kill their fourth or fifth most popular hero, but aren’t doing it in a polybagged/overhyped type of way. Could the “Green Lantern” Annual wind up being a game-changing issue? The cover to the annual certainly suggests “Superman” #75 – does the interior?

However this winds up, one thing is for certain: this is where Geoff Johns is doing his best work right now. “Aquaman,” while popular, has been a near-constant disappointment, and the less said about “Justice League” the better. His “Green Lantern” run sagged a bit before the relaunch, but we are seeing some truly great work from this creative team (fill ins or not), and the book is managing to both expand the mythos of the shared universe, while focusing the characterization and making each character more three dimensional and interesting than they’ve been in a long time. Why isn’t this what is happening in “Aquaman” and “Justice League” yet? Whatever the reason, I still hold out hope that Johns can do for those titles what he’s done here, which is create a story that is intricate, exciting, surprising, relatively easy to jump on board with, brilliantly illustrated, and so consistently great that it is often, surprisingly and unfairly, left out of the conversation for “best of the New 52.” And that is a shame.