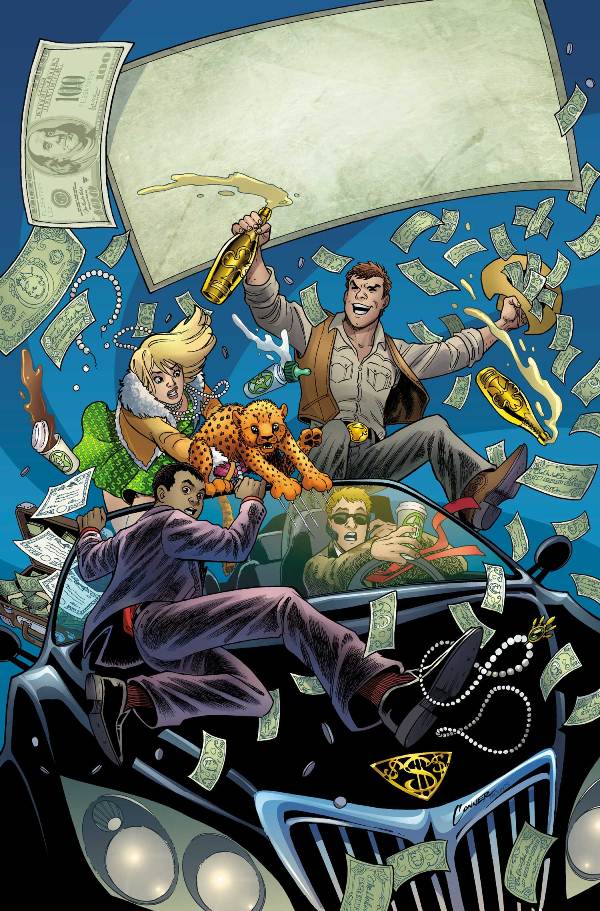 For the second time this month, our Pick of the Week goes to a DC book. Read on to learn why there pigs are flying outside your window. 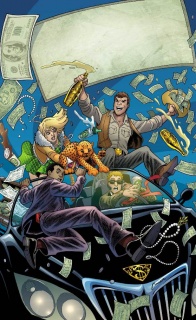 Written by Art Baltazar and Franco
Illustrated by Ig Guara

INVENTORS! EXPLORERS! ADVENTURERS! Do you need money to finance an important project? Then you should set up a meeting with THE GREEN TEAM!
• Nature of world-changing idea: _____
• Amount requested: _____
• Does your project have the potential to:
Fracture space-time? __
Replace the combustion engine? __
Attract extraterrestrial attention? __
Prove/disprove existence of deities? __
Piss off The Justice League? __
Render the human body obsolete? __
If any of the above are checked, please fill out liability release form GT2013-05. Send any 82 drawings, plans, models, or photos with request.

The best DC Comics have always been about reinvention. Starman recast the titular hero as a family legacy that lasted generations. Morrison’s Animal Man took an oft-forgotten silver-age hero and took him on a trip that would redefine the word “meta.” Hell, on “Suicide Squad” just the other week, Ales Kot did a mini-reboot of a reboot of a team that was a reboot of an almost entirely separate team. The Green Team though? The Green Team were a bunch of rich kids who showed up for half a second in 1975 in order to, decades later, provide the internet with out of context panels in the form of what Wikipedia calls “The Great American Pleasure Machine.” So what could possibly be done with a bunch of faux Richie Richs living in the New 52 DC Universe?

Turns out; quite a lot.

For a first issue, “Green Team” #1 is thankfully light on the exposition. The team is established rightaway so the plot is able to move right into the concepts, which is where most of the issue lies. A modern day prince torn between using the wealth he has to help others or increase his stock portfolio, the greatest technology expo on Earth, a person named after one of the most obsolete gaming systems ever: Green Team loves tossing out new and fun ideas, not a surprise coming from the Tiny Titans collaborative team. Honestly, after DC made 90% of their titles a contest to see who can mutilate the most faces, it’s a breath of fresh air to read a book that doesn’t take itself too seriously. A little self-awareness considering the premise(rich teenagers who want to… help people?!?!) helps the story go down smoother, but there is a sincerity in the characters (Mohammed and Commodore in particular) that demonstrate how the book isn’t the tie-in to the “One Percent vs Ninety-Nine Percent” everyone thought it would be when the solicits came out. In actuality, it’s probably one of the better New 52 launches.

This is, in no doubt, helped by having Ig Guara on interior art duties. The character’s facial expressions and acting are superb, there’s some experimentation with nontraditional panels, and the villains’ design is just plain cool, as is one particular hero’s costume. Some panels seem cleaner than others; the ones that feature close up look much better than some bigger action shots. Yet, that doesn’t really take away from the story at all. Sure, it might be a little more exciting to see Amanda Conner, who does covers, on interiors but Guara does a great job with the material he’s given, especially since he’s one of the few artists to draw and design teenagers like actual teens.

For a company that has an entire line called “Young Justice”, DC’s done a pretty bad job of actually writing books with realistically written teens. As a result, when a “young” comic has teenagers who dress like actual people and jokes about Instagram are kept to a minimum and serve a purpose in the plot, rather than just being an older comic writing saying “Ha! Kids and these technologies!” Sure with each character having more money than several alternate Earths put together, the teens may not be as relatable as say “Avengers Acadmey” or “Young Avengers”, but it’s an earnest effort to create actual teenage characters than the walking skateboards-with-backwards-baseball-caps that other young DC heroes have been.

In the end, “Green Team” is probably the most “DC” book that’s been relaunched since The New 52. It took an old, seemingly outdated concept and refitted it with modern sensibilities, characters with depth, and a lot of heart. As hard as it might have been for “teenagers who are exceedingly wealthy” to be dark and gritty, this book is one of the very few “fun” titles being published in the DC Universe right now. It’s utterly stand-out from what the rest of the line is doing and joins Ales Kot’s recent arrival on “Suicide Squad” as one of the company’s newest and brightest gems. Here’s hoping “Green Team” will be able to find an audience and stay in publication as long as it deserves to.

Because really, it’s a book that has Amanda Conner drawing a cover with a In Living Color reference on it.