This was the basic reaction when readers, myself included, heard that Rob Liefeld was taking over the creative control of three (3) DCnU books come May: “The Savage Hawkman,” “Deathstroke,” and “Grifter.” Many (again, myself included), predicted imminent cancellation, a retraction saying it was a joke, or an early Mayan apocalypse.

Instead, none of that happened, and we got three Liefeld books, including this one, the Liefeld plotted “Grifter.” This book was not one of my favorites coming out of the initial New 52 launch, but I had no real problem with it either; it just wasn’t for me. But the intrigue of one Image founder writing a character created by another Image founder proved too luring to resist. 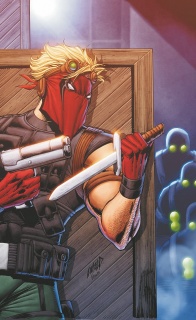 – GRIFTER faces off against the DAEMONITES alongside DEATHBLOW and CHESHIRE!

Despite referencing it inside these pages, this book is basically The Expendables. Or, at least, an action flick, with all the trappings, cliches, and expected moments in it, with a tongue (hopefully) firmly inserted into its cheek.

Frank Tieri is credited with the dialogue here, which means we have him to thank for creative lines like: “I hate to admit it, but I was wrong about you,” “nobody else dies today,” and “[We’re not going to make it] unless you start acting like the man you need to be.” Tieri clearly grew up watching Chuck Norris classics like The Octagon and Lone Wolf McQuaid, where the sassy line delivered before or after the punch was just as important as the punch itself.

Clark’s pencils really are quite nice, even if he has to draw that stupid bandana mask way more than any human being should ever have to in polite society (one guy in the transport truck is wearing a hoodie; Grifter is in that stupid mask – at least he isn’t dressed in faux-Mortal Kombat gear like Cheshire). His characters all have a nice sense of realism around them, with the exception of Deathblow who has crazy shadow-lines all over him, making him the only stylized character in the bunch.

This book, along with “Voodoo,” “Superman,” and “Stormwatch,” has been following the Daemonite invasion, and the thread between all of these books is that they haven’t been very good (“Stormwatch” is the best of the bunch, but is still a disappointment), partly because the Daemonites haven’t been presented all that consistently. I like DC having some unified threats across their books, but I think people would have cared more if it was a villain they were already aware of – the Wildstorm Universe wasn’t exactly a touchstone for many of today’s readers.

Grifter as a character is very frustrating here as well, needing a pep talk to use his powers, for no reason other than, I don’t know, he likes guns better? THIS, ladies and gentlemen, is the “hero” of the book: a dude who needs to be convinced to use his meta powers to save himself and his cohorts.

I know that the pep talk makes for a “good” scene, but that is Liefeld’s problem in plotting this book – the book is a series of good ideas for scenes that have almost no connective tissue or logic when tied together into an issue, an arc or a series. The Swiss Alps are a totally rad location for some fighting, right! A transport being blown up? Awesome! Grifter is convinced to use his powers? Sure! Escape to the sixth (not kidding – this is acknowledged as the sixth safe house they’ve used this week) safe house? Why not! The “plot” is a string of cliche scenes, tied together with nothing.

Reading this book did crystallize something for me, though: Rob Liefeld and I just like different stuff in our comics. He wants explosions and witty one liners above all else – and while I love that stuff in moderation, I want a well-developed plot above all else. I may not have loved Scott Snyder’s big reveal in “Batman” #10, but he laid out all the pieces, dropped hints, and tied it all together in a cohesive way. But we don’t even have to go to that extreme (Snyder is clearly one of the more talented writers working today); Dan DiDio, DAN “Outsiders” DIDIO, gave us eight issues of tightly scripted “O.M.A.C.” while being Co-Publisher.

I really think that Liefeld just doesn’t want the same things as I do, and therefore, his comics just aren’t for me. He is a super nice guy who clearly does work that some people enjoy and, sadly, I’m just not one of those people. This bothers me the least for “Grifter,” slightly more for “Deathstroke,” and has the potential to be really bad for “The Savage Hawkman.” Knowing how many great writers love Hawkman, it is baffling that Liefeld was put on that book. But that is a discussion for the future. I’m really trying to not come down too hard on Liefeld; that would be like a jazz pianist dismissing a dub step artist; it’s comparing apples to oranges. I just happen to like the apples a whole lot more.