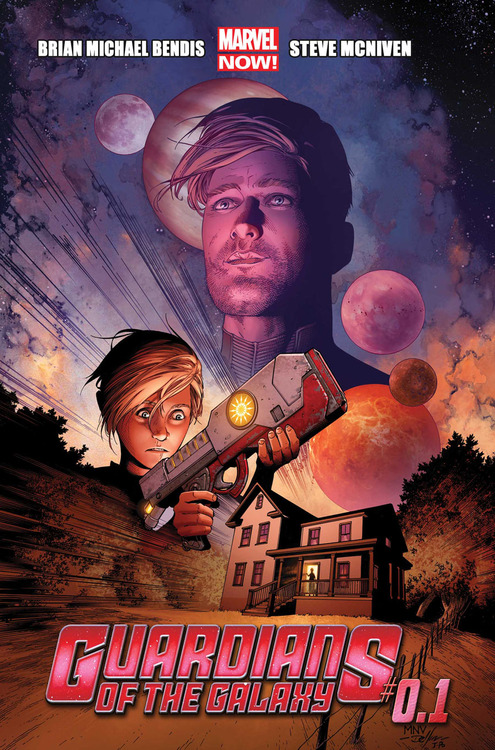 In an attempt to familiarize the world at large with their next big film property, Marvel entrusts one of its architects, Brian Michael Bendis, with the task of kicking off a new “Guardians of the Galaxy” series.

But first, we get this issue. Keep reading for a spoiler-free review of the zero issue of this new series. 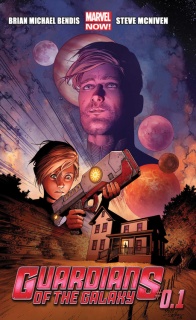 Move over Avengers…the Guardians got this. Star-Lord. Gamora. Drax. Rocket Raccoon. Groot. …and the Invincible Iron Man?! The Marvel Universe just got bigger as the legendary cosmic epic returns in the hands of superstar creators Brian Michael Bendis (Avengers, All-New X-Men) and Steve McNiven (Civil War; Old Man Logan). In this special prelude issue meet the man behind the Guardians: Star-Lord… and discover how this child of Earth became the leader of the rag-taggiest of teams in all the Galaxy. All setting the stage for next month’s historic Guardians of the Galaxy #1. This is the start of something big, Marvel fans.

There are two totally valid ways to look at this issue, and neither is correct or incorrect. On one hand, we get a beautifully illustrated, poignant prologue to a new series. On the other, we got an issue that, more or less, was excerpted in Marvel’s second “Point One” issue, and gave exactly two pages of the Guardians of the Galaxy. Is this a good way to get readers to care about Star Lord, or unnecessary backstory?

Let’s take the first approach, for now. As someone with a passing interest and knowledge about the Guardians, it was nice to be brought in on the ground floor. Literally, anyone who knows who Iron Man is can understand 100% of this issue, except for perhaps asking why a raccoon and a tree are in a spaceship. The main character’s motivation is clear as a bell, and there is enough intrigue on the final few pages to entice a reader to come back next month for the “true” first issue.

The reader also gets some truly excellent artwork, courtesy of Steve McNiven. His work is crisp and detailed without being overwrought. A good quarter of the pages feature little or no dialogue, yet it wasn’t until my third read of the issue that I even noticed, as McNiven’s artwork told the story more than adequately. He also manages to do something really tricky, which is make J’Son and Peter look like father and son without making Peter just look lik a younger clone of J’Son. The issue is certainly restrained, due to its setting and purpose, so it will be a month before McNiven gets his chance to really let loose and draw some crazy shit, but that day can’t come soon enough.

And while McNiven steals the show at times, this is indisputably a BM Bendis joint. In fact, this may be the most Bendis comic ever made. This is a decompression master class; a comic that is thoroughly enjoyable, heartbreaking at times, and has that big money hook, but in reality could have been told in two pages without missing many details. This is the knock on Bendis, and no one is going to retract that after this issue. I mentioned “Point One” earlier – sure, it featured a very condensed version of this story, but it contained all the necessary elements, and rendered this issue all but useless. And there is the Bendis rub; I always really enjoy his books when I’m reading them, but I finish them in less time than a moderately long pop song takes to listen to once.

Bendis can write young characters like almost no one else, and so the sequences with young Peter are especially entertaining, but – and stop me if you’ve heard this before – don’t really add that much to the book. If this book featured stories about each of the Guardians, perhaps glimpses into all of their origins, that would be a fantastic introduction to this series. But from this team, it really shouldn’t be the most normal and easiest to explain guy that gets a full issue of background.

If the job of this book was to whet appetites for next month’s #1, it succeeded. However, if part of the mission statement is producing a comic worth your four bucks, then the book is far less successful.