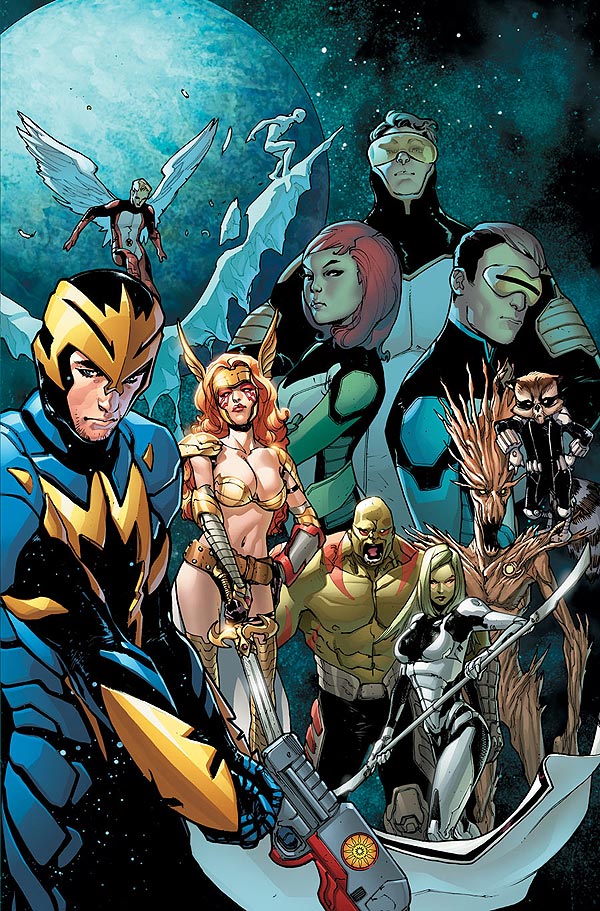 It’s a Bendis-palooza as the ‘Trial of Jean Grey’ brings everyone’s favorite ragtag team of space misfits to Earth in “Guardians Of The Galaxy” #11. 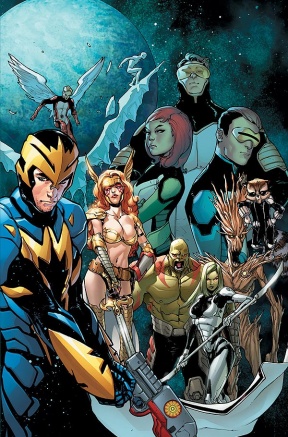 The Guardians of the Galaxy get a reminder of Earth when they cross paths with the All-New X-Men during the TRIAL OF JEAN GREY! When an alien race discovers that the original Jean Grey is back on Earth, they decide to hold her accountable for the acts of the Dark Phoenix, and it’s up to the Guardians to help the X-Men save her. You won’t want to miss the first encounter between two of the biggest franchises in the Marvel U!

It’s hard to believe that in a little over a year the “Guardians Of The Galaxy have changed from Marvel also-rans into a multimedia franchise. With a movie on the way next summer, the “Guardians” series was relaunched with all-star writer Brian Michael Bendis and big name “Civil War” artist Steve McNiven. Marvel’s really brought out the big guns, and as a result the series quickly ascended in both popularity and sales. Now the book is taking a journey to Earth in a crossover with the Bendis penned “All New X-Men”, cementing the teams place in the mainstream of the Marvel universe.

Like last week’s issue of “All New X-Men”, this installment of “Guardians” sets up the looming intergalactic trial of the teenaged Jean Grey for the actions of her Phoenix-Force possessed future self (long story). After a bounty hunter finds Guardians leader Peter Quill in a very Mos Esley-esque bar, the team is still dealing with the consequences of Quill’s conflict with alien father (another long story). In the meantime, Rocket Raccoon picks up a transmission from Shi’ar leaders planning the imminent capture of Jean Grey, and the Guardians rush to Earth to protect the young mutant.

Brian Michael Bendis has managed to flesh out the Guardians into fully realized characters in under a dozen issues. The fact the series is largely independent from the main going ons of the Marvel Universe, save for an Iron Man team up here and a fight with Thanos there, has been very beneficial for the series. Bendis has had the freedom to create entire worlds for these characters in which to play around, instead of shoe-horning them into an existing one. This issue, despite its crossover status, exists largely in the “Guardians” world, and Bendis is sure to keep the same action-adventures in space tone in the series. The author’s trademark humor is on display, and when the scene headers can make the readers chuckle, it makes the book very enjoyable to read.

What ultimately detracts from the issue is that so much of it is devoted to the aftermath of the Guardians recent activities, before the abrupt switch into the ‘Trial of Jean Grey’ occurs about two-thirds of the way through. The gathering of alien leaders that’s spread throughout the issue functions as well as exposition can, but again feels out of place until the crossover starts. It feels like the book is trying to serve two purposes: acting as a regular “Guardians of the Galaxy” issue, and the start of a large multifaceted story. It sits on the fence, and in the hands of a writer less skilled or experienced that Brian Michael Bendis it would have been a very clunky and disorienting read.

Sara Pichelli became a household name in the comic world when she co-created Miles Morale, the new Spider-Man in the Ultimate Universe (another even longer story) with Brian Michael Bendis. Their collaboration made “Ultimate Comics: Spider-Man” a critical and fan favorite, and, frankly, the only piece of the Ultimate Universe many people cared about. This issue proves that even as far removed from the rooftops of Manhattan as possible, Pichelli and Bendis make a great team. The first two pages of the issue feature barely any dialog, relying on the facial expressions of Quill and co in the bar to convey the story, and Pichelli doesn’t disappoint. Every panel has a different emotion on Quill’s face, and it only take a second for the reader to interpret the story. It flows very well, and if the art had been bad, this sequence would have a very low benchmark for the rest of the issue.

Despite the fact this issue features only minimal amounts of action, Pichelli’s art makes the book move along at a brisk pace. The scenes never feel drab or ponderous, and even when it’s just a bunch of alien dudes talking, at least they’re interesting looking alien dudes. The art even makes Peter Quill’s serious case of mid-1990’s hair drapes look stylish, so just imagine the quality in the rest of the book.

Much like its “All New X-Men” counterpart, “Guardians of the Galaxy suffers from being mostly setup and no payoff. To the point where both issues end (SPOILERS) on the same panel, and so the story literally doesn’t move further ahead. The backstory is fleshed out, but a quick glance at any of the promo materials for ‘The Trial of Jean Grey’ would reveal basically the same information. Instead it’s the humorous and fun writing of Bendis and the always dependable art of Pichelli that make the issue an enjoyable read despite its short comings.