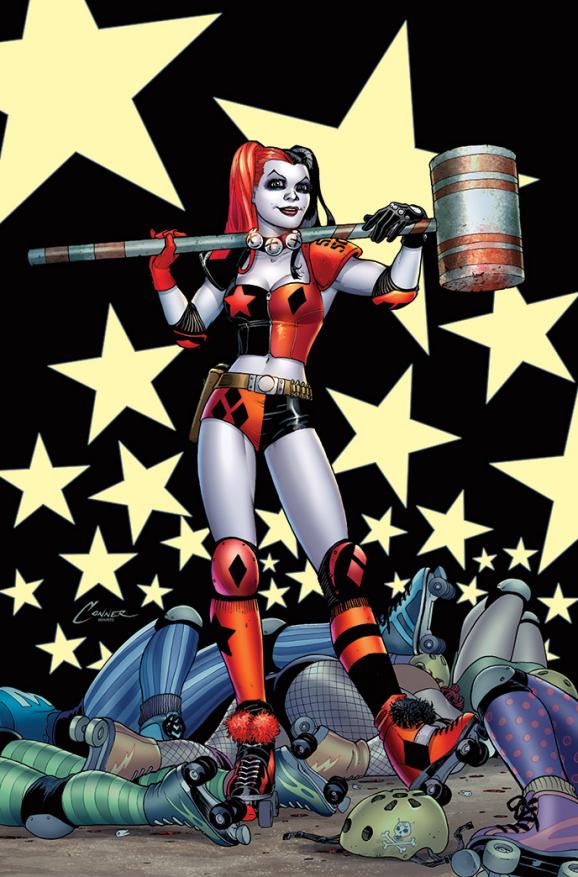 After a fourth wall breaking prelude, Mr. J’s favorite girl settles into a her new solo title, and adjusts to her new status quo in “Harley Quinn” #1. 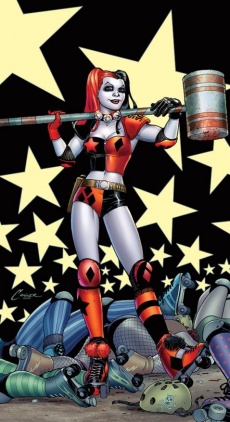 Harley is set to begin her new life, but she needs a job first! Enter the Coney Island Roller Derby! It’s game time as Harley sets out to destroy her competition—literally!

Twenty years after making her debut in Batman: The Animated Series, Harley Quinn has become the star of her own solo series. It makes sense, as she has grown from the Joker’s trusty girlfriend into a popular and fan favorite character in her own right. Last month’s zero issue featured an abruptly whacky set up, as each page featured the work of a different artist as Harley offered her fourth wall commentary. It was a fun read, if only because it was so different from anything else DC has published recently. Now the proper first issue of “Harley Quinn” has hit stands, and sets the character down a new path.

Harley Quinn has been a doctor, a criminal, a sidekick, a girlfriend, and sworn enemy of the Dark Knight, but now she takes on her strangest role yet: landlord. One of her former patients at Arkham Asylum has left her the deed for an apartment in his will, so Harley straps all her worldly possessions to the back of her motorcycle and heads to Coney Island. After taking charge of her new building, Harley sets about meeting the tenants and building a new life for herself. There are job interviews, roller derby auditions, rooftop tanning, you know – the typical super villain activities, all with hints that something more malicious is going on underneath the surface.

After taking her through the most meta adventure this side of a Grant Morrison comic, writers Jimmy Palmiotti and Amanda Conner scripted a much more conventional issue in order to introduce Harley and the reader to her new surroundings. Despite the fact that there isn’t an art change on every page, the story moves along at a very quick pace and manages to find the sweet spot between boring and information overload. The narration isn’t overdone, and the dialogue features no more than the necessary amount of exposition, even from Harley’s talking gopher travel buddy — and yes, you read that right. The story includes lots of smaller moments that add to the book, like Harley applying makeup and wig to go on a job interview, and her rescue of a neglected dog that becomes another traveling companion.

Chad Hardin made his debut in the final pages of the zero issue, and now assumes her regular art duties in “Harley Quinn” #1. His style is more realistic, with cartoony moments as the actions gets very Looney Toons-esque. For example, the pile of stuff on the back of Harley’s motorcycle exceeds the size of the bike itself several time over, and careens across the page as she weaves through traffic, in a manner that is completely impossible, but Hardin renders the scene with just enough fluid lines and motion blur that it actually works. However, if the reader is someone who enjoyed the more cartooney version presented in the zero issue, the style shift towards the standard DC visuals might be a let down for some.

Hardin has the opportunity to flesh out a whole new world for Harley with this issue, and her new Coney Island residence visually comes alive as she meets the residents and explores the area. The amusement park is featured in the background of many shots and looks very authentic and detailed. Anyone who has glimpsed an NYC postcard will be sure to recognize the structures. Hardin has a talent for character work, and despite the challenging fact that everyone besides Harley is a completely new to the universe, he has managed to create people that look different and are visually memorable. Another highlight was the roller derby scene which, while lacking some of the details featured throughout the book, still felt fast moving and enjoyable. There are still some growing pains as Hardin adjusts to the new book, such as Harley’s proportions going from slender to Wonder Woman-esque on a couple of occasions, but she’s already so visually distinct that it’s easy to forgive.

There is not one single problem that arises when reading the issue, but rather it is with the overall nature and tone of the book as a whole. What made the zero issue so refreshing to read is that it was unlike anything else DC has published since the New 52 reboot. The push for a unified publishing universe and had a homogenizing effect most of DC’s books, and the prelude issue was such a break from that it gave hope that the series could break away and forge its own path through the gritty realism found everywhere else. “Harley Quinn” #1 is funny, strange, and wacky, but the overall story does feel like it took a giant step towards the average DC book.

Final Verdict: 7.0 – A very soft buy. This book has a lot of potential, but it needs to emphasize what makes it different from a standard New 52 series.