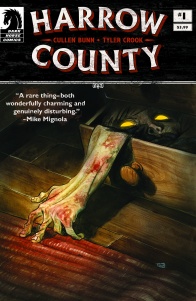 Written by Cullen Bunn
Illustrated and Lettered by Tyler Crook

Emmy always knew that the deep, dark woods surrounding her home crawled with ghosts, goblins, and zombies. But on the eve of her eighteenth birthday, she learns that she is connected to these creatures—and to the land itself—in a way she never imagined.

It happens rarely, but every now and then, I’ll be in the middle of reading a new book and then I’ll realize, “I may be reading one of my all-time favorite books for the first time.” That’s what happened when I read “Harrow County.” This new series has me utterly hooked.

I was most struck by Tyler Crook’s artwork. He’s been doing fantastic work in the pages of “BPRD Hell on Earth” for a while now, but in last year’s “Bad Blood” he added watercolors to his work and took it to a whole other level. Later that year he did “Witchfinder: The Mysteries of Unland,” and his work was so fantastic, I couldn’t help but think of him as the “Witchfinder” artist… And now he’s doing “Harrow County,” undoubtedly his best work yet.

He fits this Southern Gothic world perfectly. For me, an important part of horror is texture. So when I watch a horror film, the ones that click with me are usually good at evoking texture with sound and moving images. The same thing goes for comics. When the world has a tactile quality to it, the horror elements just seem to work better. This is precisely what Tyler Crook’s “Harrow County” pages excel at. Look at the tree on the double-page spread on pages four and five. Just looking at it you know what it would feel like to run your hand over its bark. Mud, blood, grime… You can feel them all in Crook’s pages. I love the way the skies look in “Harrow County.”

Further into the book, Crook has to depict one of Emmy’s dreams. It’s startlingly different from the other pages around it. Color isn’t treated literally, but more like a gauge for intensity, where the hottest and brightest colors are the focal points of the dreamer’s fear. No doubt we’ll see more of Emmy’s dreams as the series progresses, and I’ll be interested to see what Crook does with them.

Crook also handles the lettering in this book. His speech bubbles are delightfully imperfect with nice, short tails (unless the speaker is out of frame). Personal preference, I guess, but the wonky bubbles complement the story’s genre. With an art style like this, traditional lettering for sound effects could easily feel like they aren’t a part of the scene, something pasted over the work later. That’s certainly not the case here. There’s even a moment when the sound effects were allowed to sit behind the action instead of in front of it (page sixteen, when the birds take flight). I’m fussy I guess, but in many comic books, I find the sound effects pull me out of the story purely by their “otherness.” Here, the visuals are completely cohesive. You can tell there’s a single person at work here.

As for the writing, this one has been simmering for a while. Cullen Bunn was originally writing this as a serialized prose novel called “Countless Haints” back in 2011. The idea was reworked with Tyler Crook and now we have “Harrow County.” Though the title has changed, the promise of countless haints remain. There’s already been a few glimpsed in this first issue, and there’s many more to come.

“Harrow County” is the kind of story Cullen Bunn was born to tell. He makes it seem effortless, a tale spun as easily as breathing. I can’t imagine how someone could get through the first five pages of this comic and not feel swept up in the world. Like “The Sixth Gun,” this comic has a narrator. I’m not a fan of narrators in comics. I get very critical very quickly. However, Cullen Bunn pulled it off in “The Sixth Gun” and he’s pulled it off here too. Given the genre, it doesn’t feel like an imposed voice, but rather a natural extension of it.

I got to read the first two issues in a single session, so it’s a little hard to separate my experience of reading issue one from issue two. We are stepping into a fantasy world in “Harrow County,” a world full of countless haints, but don’t expect a monster parade. Bunn has found a nice way of using Emmy’s character conflicts to explore the world she lives in, and in exploring the world she lives in, reveal more of her character. Each element nourishes the other in a way that I found very satisfying. The emphasis is firmly on mood and character.

There’s a back-up story in this issue, a one-page story by Cullen Bunn with Owen Gienni on art duties, the first of several “Tales of Harrow County.” It’s a story apart from Emmy’s, but it builds the world, and gives a sense of what Harrow County and its residents are like beyond Emmy’s farm. Owen Gienni’s work is a good match for Tyler Crook’s. It’s similar enough to feel like they’re a part of the same world without feeling like an imitation. They complement each other well.

Apparently there’s going to be many more back-ups going forward, not just “Tales of Harrow County” comics from Owen Gienni, but also prose stories from Cullen Bunn with spot illustrations. These are going to be exclusive to the issues though, so if you’re interested in this sort of material, don’t wait for the trade, because you won’t find it there.

In case I haven’t impressed it upon you yet, I loved the hell out of this book. Under normal circumstances I’d probably be lamenting Tyler Crook being too busy to do further “Witchfinder” stories, but having him on “Harrow County” is even better. Together, Cullen Bunn and Tyler Crook are unmissable.

Final Verdict: 9. An excellent start to a very promising series.

In case you missed it, there’s been a few videos showing Tyler Crook’s process as he pencils, inks, and colors the opening spread from issue two. Definitely check those out.