After what feels like years, Marvel’s hottest book finally comes back to shelves. But is it as amazing as we remembered? Read on to find out! 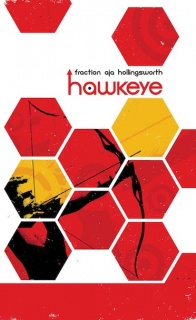 Fraction and Aja continue the surprise comic hit of the century!After a lifetime of decisions both good and bad, Clint and Barney Barton have to realize they are brothers and ultimately, they’re the only ones who can save one another. I mean if they don’t kill each other first.Good luck with that, Barton brothers.

I like non-linear plots. Really, I do. One of the reasons why “Hawkeye” from Matt Fraction is David Aja is such a good book is due to their experiments in storytelling, and the constant flashbacks and flash forwards are a major contribution to that, along with the excellent characterization, tight plotting, and singular art. However, after months without an issue, I feel like I need a major refresher. Did you realize that it has been literally six months since a certain character got grilled? The action has hardly moved past that, with this issue being the first time that Clint acknowledges the tragic events on the rooftop. The Pizza Dog issue, the Clown interlude, and Barney’s tale were all great stories, no doubt, but there’s a small sense that they may have gotten in the way of the large overarching story.

But that’s not the type of story “Hawkeye” is. Marvel doesn’t need anymore big stories; the X-Men are off battling the entirety of time and Infinity’s causalities involve at least four universes. “Hawkeye” is about the smaller things in the Marvel Universe. The bowman reconnecting with his brother, the ex ignoring the bastard who really doesn’t deserve a second chance, and an elderly man on the shore hearing news that could only be shared in person. Even though there is still some residual confusion stemming from the book’s shipping schedule, none of that really matters. This is the story of what Clint Barton does when he’s not with The Avengers. There is not one single grand plot, but a thread of circumstances cascading together into the story of this man’s life.

Said life is beautifully illustrated by David Aja who continually blends the high-end with the mundane. The Bros, initially this book’s joke bad guys, have now become more than that. They are a threat, lurking in the shadows of a funeral and waiting to stomp our hero’s neck in, once their masters and his personal assassin give them the say so. The most haunting image in the entire comic, however, comes from a setting out-of-town. Without venturing too far into spoiler-territory, kudos to Fraction and Aja for not leaving behind the problems of issue #7. As a native of New Jersey, this scene hit me more personally than anything else this week. Aja gets a lot of credit for his non-traditionalist layouts and structure, and while that certainly holds true here, the quieter tragic moments are what take center stage this month. “Hawkeye” #13 is not very action-packed, but it’s an omen. An omen of the reckoning that each character will face in due time.

There’s also funny moments. This is a comic about a guy who shoots boomerang arrows, not Sylvia Plath ones. While this comic was never really a comedy series (the first issue literally had Clint carry a run-over dog in the rain and yelled at a doctor to fix it,) there’s a distinct tempering of tone in the latest issues, especially this one. Though the small visual gags are still present, #Hawkguy can’t afford to joke around anymore. As ridiculous as it sounds, The Bros are coming after him, Barney too. He hasn’t even met The Clown that, through one or two appearances, has already solidified himself as one of the most intriguing yet brutal villains in years. Despite those dangers, Clint is still preoccupied with his more personal failings (Hello Spider-Woman!) that are keeping him from solving a threat that any other book would have wrapped up a while ago. That doesn’t halt or hinder the story though, instead it enhances it and, bring it around back to this, makes “Hawkeye” the story of what Clint Barton does when he’s not with The Avengers. “Hawkeye” is the most intimate comic book Marvel is publishing and even when the stakes aren’t ridiculously high, it manages to be incredibly significant.

What we’re getting at is that we are incredibly grateful for “Hawkeye” to be back. You should be too.