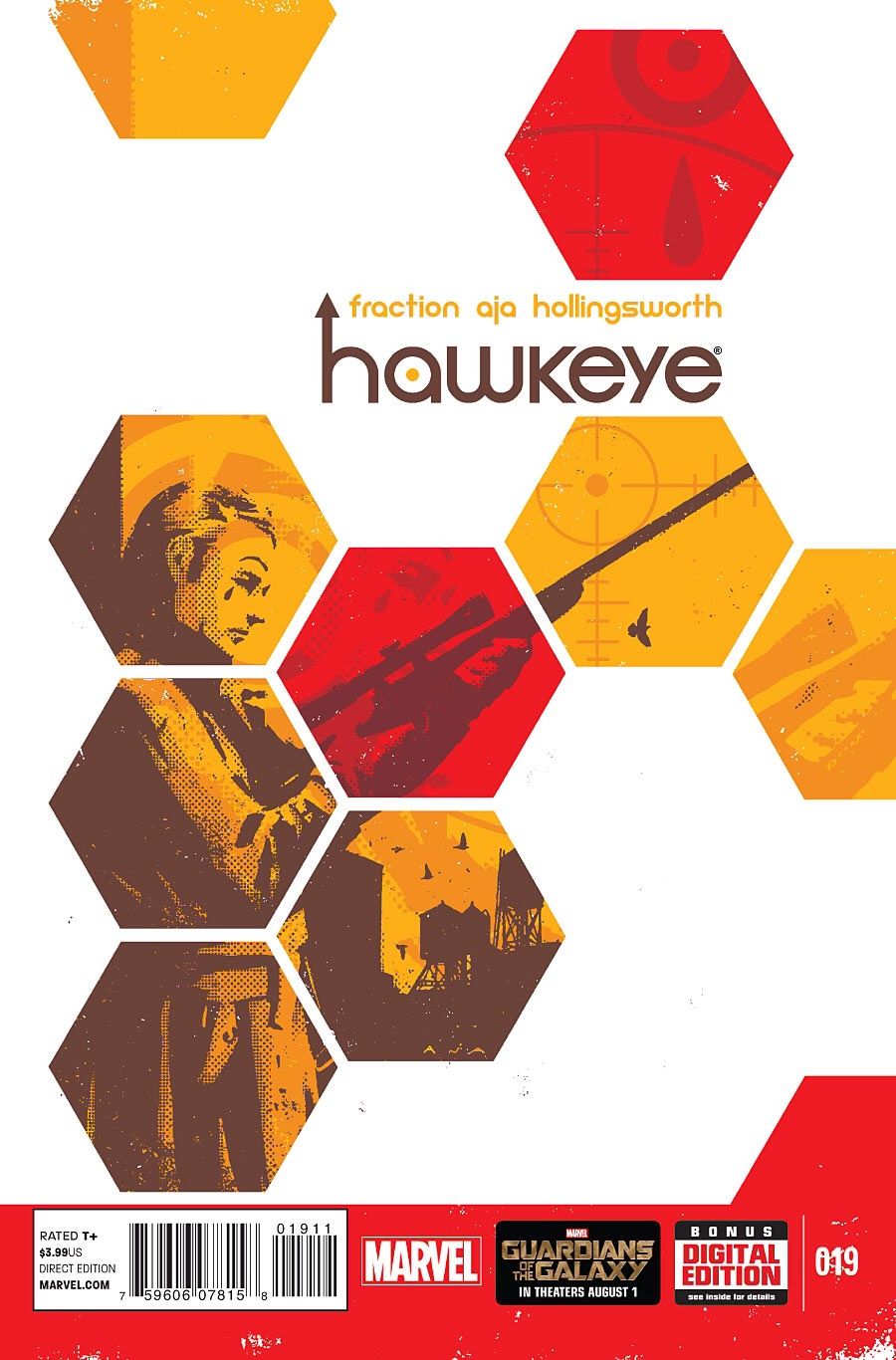 Like the faithful Lucky forewarned, “Hawkeye” #19 returns us to the bloodied heels of the Barton brothers. This time, like most other times, Clint thinks he’s lost it all. Deafened from the previous battle with the hit-man, Clint is stuck under the care of his “clobbering” brother Barney in an apartment complex about to be stolen from his hapless grip. Old hat, right? Wrong. 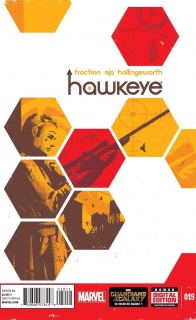 So, this isn’t the first time Barton’s gotten bludgeoned, pushed people away, refused to take a stand, gone deaf, or duked it out with Barney. But, and this is one HELL of a but, this issue is the FIRST time Clint realizes hitting everything isn’t always awesome, especially when it’s yourself. (Um, where’s Kate with the camera?)

Matt Fraction and David Aja strike pulpy gold. In this issue, Barton’s character — that narcissistic nihilist, that unlucky guy who might just save the day or at least part of it with a few tricks up his sleeves and some arrows to aim before the superpowers arrive but bulldozes over his own life — reaches a new level of honesty and grit that gives Phillip Marlowe a run for his money. Like a classic Chandler character, Clint is left isolated, struck in the very apartment that he tried to save, without thanks. Stripped of his hearing, Barton loses the only sense that has helped him through his tooth and claw times: his perception. 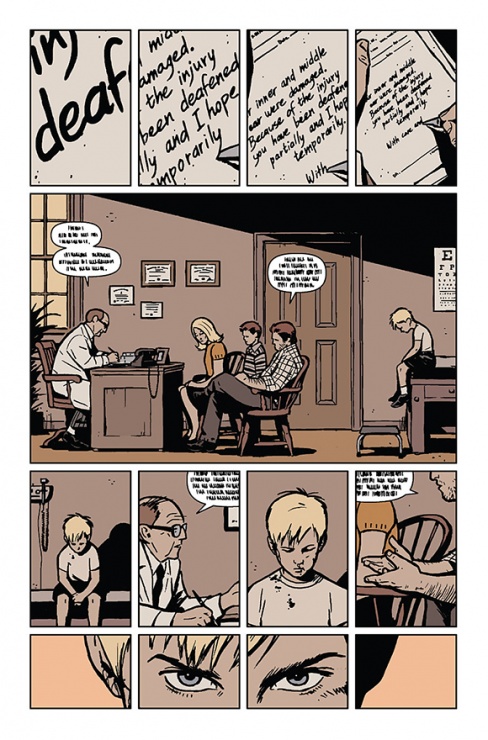 Aja and Fraction uses Clint’s second time being deaf to develop the idea that Kate has told us long ago: being shut off from the world isn’t new territory for Clint. He doesn’t care to communicate. The choice also to keep us with Barney as the one viewing Clint pushes the story along to uncover, to want, to fight for Clint. Without Barney we might have gotten lost in the silence or style, but because of him we revel in its challenge.

Aja and Hollingsworth push this concept further visually by depicting the root of this problem through showcasing his initial and current deafness. Drawn back to back in beautifully balanced page-to-page (talk about daring) panel flashback between Clint’s old and new deafness, we see how Clint Barton has learned to operate in a world that takes from him without asking first.

Choosing rusty brown palettes for his youthful deafness we see the spite and fire that was young Clint on the left and we see the drenched in blue palette of 5 o’clock shadowed, hasn’t showered in days, despondent Clint on our right side. Brown and blue, heavily inked, with minimal facial depictions we see only the edge of a scene. We see exactly what others see of Clint (the toss of a narrowed look, the furrow of a tired brow) and we are not given anything more real to hold onto, just an impression of shadows lurking beneath every surface.

The lack of detail in any other story could be maddening, but in this one, it’s breathtaking. We are left searching the boy — and the man — to see what else might be broken in one and how the other could fix it, or if some things in us stay broken. Or, and this is the dangerous suggestion here, that our brokenness isn’t special; it’s essential. It’s what gives us voice. 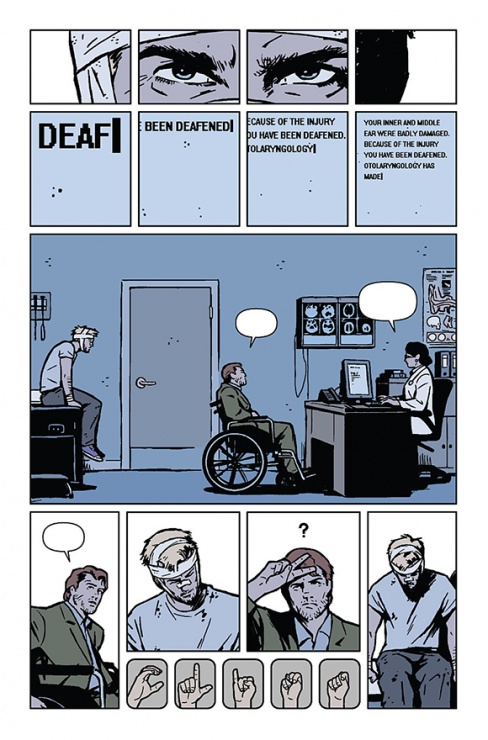 Mystery in story is one thing, but mystery in lettering is genius. Aja and Eliopoulous amaze with their abilities to play with words and their depictions. Knowing the weight of meaning, signs and silence, the two write — like all good mysteries do — with the perfect balance of reveals and secrets. Aja and Eliopoulos switch off between when messages are signed (ASL illustrated panels that look like the warning safety guide read on airplanes before lift-off) and are given empty speech bubbles in altering shapes of soft rounds or jagged edges or clipped words. This choice is clever as it puts more distance between the reader and Clint, as well as Clint and his world. Like Barney, the faithful antagonist to Barton, we readers are forced to piece together what Clint actually hears, what he wants to hear, and what he wants us to think he hears — and why.

Speech bubbles break into half-received messages. Words are scrawled too tight together to read. Hawkeye will take this from you: the ability to love another empty speech bubble again.

Okay, so there isn’t a high speed chase or breaking free of shackles in an underground tomb, but there is something else here, far more haunting for the reader to see: Clint’s pain. Fraction and Aja and Hollingsworth and Eliopoulous brilliantly demonstrate how isolated Clint Barton has become. What we get in this issue is a battle, and it is a battle won. Clint gets the world that Hawkeye has always secretly craved — one where he is alone, truly, without the ability to receive or respond to others as a hero — and it is a different kind of hell. We see Clint’s disability as really a secret desire, and we see how damaging it is to live that way.

Barney Barton tells us, “Fightin’s easy. Fightin’s just a thing you do. You hit and you get hit and the one that can hurt the most the longest wins…but to actually do good, y’see to do good–ya gotta be good.” Clint’s response is something that we’ve wanted to hear from him for so long that actually hearing him say it will make your eyes water. If only Kate was there to hear it. 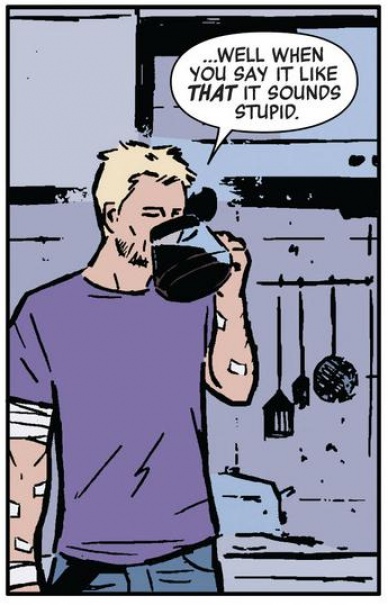 Final Verdict: 9.4 — Could make Marlowe give a damn about his own problems; a wild look into the anti-hero with wit, style, and nerve that others will be talking about for some time.