If you’re a fan of comics, and things which are good, chances are you look forward to Hawkeye the way you might look forward to an ice cream sundae (or some kind of waffle breakfast? I don’t know, you might be lactose intolerant.) Anyway, most of us are so far in love with Hawkeye that the prospect of an annual is even nicer – a sundae with rainbow sprinkles, say, or waffles smeared with custard. Oh, I got you at the custard, didn’t I. Anyway, the prospect of a Hawkeye annual must be a nice prospect, and even more so when it’s all about Kate Bishop. Because we love her. Don’t we? 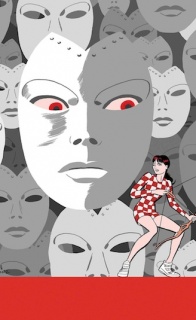 Go west, young lady! Kate Bishop heads to Los Angeles — to get away from New York, life, and Clint Barton — but NOT trouble! But Madame Masque is hanging out at poolside with the rich and famous as well! Who is Kate Bishop? Find out alongside Kate Bishop herself as a wild new status quo comes to HAWKEYE.

As foreshadowed by that excellent, excellent Pizza Dog issue, Kate Bishop isn’t terribly happy with her life in New York, and by the first page of this issue has made up her mind to go to Los Angeles. But as that cover might suggest, there’s a good deal of danger lurking on the west coast. The most engaging and interesting part will be watching Kate come face-to-face (so to speak) with that danger and, through one heck of a charming interior-dialogue device, try and figure out if she can handle this on her own.

Basically, in addition to the Kate we see capering along in the larger panels, we get a minimalist-caricature Kate in a series of smaller ones presenting her running commentary, and the contrasts and ironies that this device bring up are pretty much priceless. The self-deprecating inner dialogue is a device that can be woefully overdone (cough, Batgirl), but rather than a superficial sprinkling of doubt and insecurity, this sense of Kate’s inner life is the heart and soul of the issue, delineating her motivations while still leaving enough of her thought process to the imagination to give us a surprise or two on the page-turn.

It would be one thing if Kate were blundering her way through this situation, but this is one smart girl — not to mention a totally brash one — and as a character she never ceases to impress. A wonderful example of an action that epitomizes both these qualities, her twice-repeated speech at the end of the issue is alone worth the cover price. Meanwhile, the new status quo that the solicit hints at is looking to be awful promising. Not to give anything away, but where this issue leaves us really is a brave new world, and if the going so far is any indication, it’ll be so much fun to witness how things work in this new era of Hawkeye-itude.

As mentioned, Javier Pulido’s minimalist art style is pretty much integral to the humour and sense of fun that permeates this issue, with the frequent use of silhouette establishing a unique overall look. It’s all a lot more pop art than his work on “Hawkeye” #4 and #5, but just as fun, fitting right in with the Hawkeye house style – frequent small, square panels, and a preference for the long shot, all set off by Matt Hollingsworth’s retro colours – while still riffing off it in interesting ways. Little touches like a Lichtenstein print in the background or the slight distortion of an image on a television screen add even more personality, and while Tom Brennan’s end note kind of ruins the mystery, the visual in-jokes and references to earlier issues are great fun to pick out, as always.

Last but certainly not least, Clayton Cowles’ lettering adds quite a bit to the experience, emphasizing the scrappy quality of Kate’s inner voice while deftly handling some complex tangles of speech bubbles out in the real world. For all its ostensible focus on Kate, this issue feels a lot like it’s got multiple narrators, and Cowles handles the multifacetedness of Kate as a personality clearly and lucidly.

So are any of you really surprised? Overall, this is just another great issue of “Hawkeye”. Overall, it’s a great Kate issue. Overall, it’s fun and action-packed. Overall, just buy it already.