Sometimes, DC just makes me shake my head. Not that they shouldn’t be publishing a title featuring He-Man, but the way they are going about it is truly weird.

Yesterday, “He Man and the Masters of the Universe” #1 was released in comic shops. Eleven days before, “Masters of the Universe” #1, a digital-first DC title, debuted online. The miniseries is written by “Earth 2”/”Starman” writer James Robinson; the first issue of the digital series was written by “Justice League”/”Green Lantern” writer Geoff Johns.

So, after years of nothing, DC decided to launch two He Man titles with almost the same name and top creative teams simultaneously?

Just to clarify, I will be discussing the print series by Robinson and Philip Tan, not the digital series, which, supposedly acts as a bit of a set up for this mini. 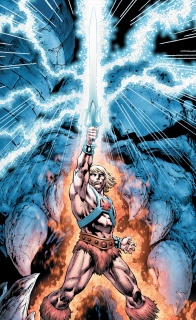 Robinson attempts, as is his wont, to build a world here, and by introducing us to Adam as a woodsman who occasionally lives in his head, instead of introducing He Man, Robinson helps us understand the type of story this is going to tell. And as far as that story goes, Robinson does a nice job setting up an origin for Adam, and puts the character in position to do all sorts of things in future issues.

However, there are very few things in this debut issue to excite readers, new or old, about Adam’s adventures. Sure, there is nothing wrong with a story about a man taking care of his father, or of having ambitions that seem insane, or even of a dual reality, but that isn’t what is drawing people to this book; people are being drawn in because when they were kids, they watched He Man cartoons and played with the toys. No one loved these characters more than I did when I was 5 years old, and I have very fond memories of these characters in various iterations.

That is what will draw the reader to this book, but I’m still curious as to what drove the creative team here. Robinson is, frankly, too old to have had a childhood experience with these characters, and due to their licensed nature, I doubt that stories between their mid-80s popularity and now were frequent or even good. Yes, a job is a job, but this month Robinson has four books coming out from DC – “The Shade,” “Earth 2,” “DC Universe Presents: Savage” and this. As for Philip Tan, he was doing fantastic work on “The Savage Hawkman,” but when Rob Liefeld took over the book, Tan went away. I am sure there are other books he could be working on right now, so, again I will ask – why is this team here?

Because frankly, this book isn’t being pushed hard by DC, so it isn’t as if they wanted in on a big book. Nor is it because the characters are all that interesting or well received. Perhaps this is part of their exclusive contracts (that I assume each has)? I really don’t know.

The reason the question of why is so important is because although both do nice work, this feels very phoned in from all parties. Tan’s work is very line-based, and makes the book look a lot less polished than most He Man fans would expect. I, for one, like this style, but I could see fans wanting the characters to be shiny like the toys to be turned off. Tan’s assignment here seems like a good one if the target audience was comic fans, but if toy fans are the goal (and let’s face it, they are), it may have been a misguided choice.

As for Robinson, books like this could write in his sleep, and there is no indication that he wasn’t a somnambulist in front of his computer for most of this. Adam’s characteristics don’t need too much subtext – people come out and say what a good son he is, we see him chop wood, and his internal monologue does the rest. Again, Robinson and Tan, as creators, is what got me to check out this book, but I’m not the target audience.

Or am I? I watched these cartoons and bought these toys when I was a kid – why don’t I see myself as a potential target for this book? It is because DC hasn’t been advertising it to me. The only way I knew of this book is because I tend to scour the DC solicits very closely (mainly for Soliciting Multiversity), and I noticed the combination of the book and creative team. But this hasn’t been a featured preview in the back of a book (like “Batman: Noel” not too long ago), nor was there much more than some cursory articles on the Source, DC’s official blog. If DC wants comics people to buy this, why haven’t they been focusing on the very things we want as comics readers (a solid creative team)?

To be fair, I don’t get Toyfair (does the magazine even exist anymore?), so I don’t know if they are even advertising to He Man fans. I have a feeling there isn’t as much of an organized market to get to toy fans the way there is for comics fans.

So, I will ask it again – why does this exist? An under-exposed, over-talented, licensed comic is a weird, weird thing. And while I’ve seen a lot of great and a lot of terrible this year from DC, I haven’t seen anything like this yet. Bravo, DC – you still manage to surprise me.

Final Verdict: 5.0 – Browse if these characters do something for you