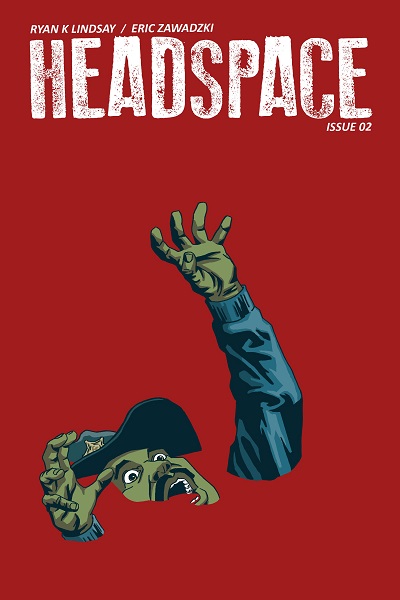 Living inside another person’s head is not exactly a picnic – and when Shane encounters something that doesn’t belong there, it’s clear there’s more going on than he knows. This is a mind-bender of a Monkeybrain title, and while it’s weighed down by some exposition at this juncture, it’s still an absorbing read. 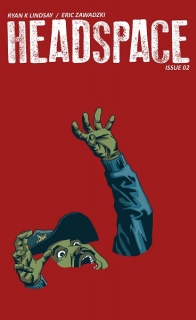 Shane chases his son through the labyrinthine battlefield of Max’s memories and fears. Will he find a way out, and can he trust that path?

It’s hard not to compare this story to Image Comics’ “Green Wake”; it’s got a similar focus, putting a man with a painful past into a world that’s one part harbor town, one part purgatory. But as this issue moves forward, some new elements of the plot come to light; and while the story still has a similar general theme to “Green Wake”, the concept at the core distinguishes itself. There are probably a million ways to tell a story about guilt and redemption, and the angle that Lindsay and Zawadzki explore here is rich with possibility.

Up until now, we’ve been accessing this story chiefly through Shane’s first-person narration. It’s heavy stuff, and in the beginning of this issue we get a particularly heavy dose of the guilt Shane is feeling about his past. It takes an encounter with a living puppet – a vision of the man whose mind he’s inhabiting – for Shane to get some additional perspective on his position.

While living puppets are definitely not your usual method of delivering exposition, this is probably the most successful scene in the issue. Eric Zawadzki’s work is impressive here, implying a puppet-like looseness to Max’s movements while putting forth a disturbing character. And Lindsay makes a perfect choice as to the marionette’s first line of dialogue, unsettling us right off the bat and giving us a clue as to one of Shane’s later revelations.

All the while, Shane himself is something of an enigma; his narration gives us an idea of his interior world, but he doesn’t emote too much outwardly. This less-is-more approach, combined with Zawadzki’s feel for architectural detail in laying out the streets of Carpenter Cove, gives the story a hardboiled feel. There’s a strong sense of place, and of Shane’s lonely role within it, and this classic formula balances the more surreal elements of the story.

One of the catalysts that pushes this issue forward is the giant wave that crashes in on Carpenter Cove. Water is notoriously difficult to pull off well, but Zawadzki gets across the movement and force of it with confident lines. The sheer physicality of this wave gives the issue a lot of momentum, driving Shane to the library for shelter – and combined with a murky colour scheme, it gives the comic as a whole a strong feeling of dread and inevitability.

This disaster also has deeper consequences for the plot; and while the professor who delivers this last bit of exposition is a somewhat conventional figure, the information he delivers is a game-changer and a half. It’s going to take a lot of comic to spin out all the consequences of what’s going on here, and Carpenter Cove as it now stands is a hell of a backdrop for it to play out against. The way Lindsay is pacing out this story, it’s clear there will be no going back from this revelation; Shane faces an overwhelming task.

All told, this is a satisfying second issue that successfully navigates a difficult moment in the plot, delivering exposition while still gesturing toward the story’s emotional core. Terrifying as it is, this is a headspace worth getting into.