I don’t think you get any more “end of an era” than the final issue of “Hellblazer.” Sorry, DC, but even if you have someone like Jeff Lemire writing “Constantine” I won’t be interested if he can’t give the finger to the devil and drop the C bomb. Until then, though, we have this finale issue to mull over. 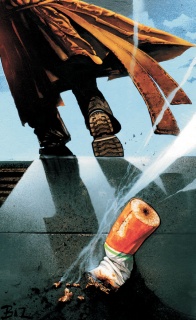 It’s the heart-rending conclusion of “DEATH AND CIGARETTES”—and the end of Vertigo’s longest running series. John Constantine has escaped, cheated, narrowly avoided and even reversed death on multiple occasions over the past 25 years. Now, we will test whether the old boy has one more second chance in him. Don’t miss this epic, oversized special issue celebrating everything that makes John Constantine so bloody unique.

This issue clearly has the mark of something that could have been a good, though maybe not great, finale for Peter Milligan. Like other Hellblazer writers before him, a good part of Milligan’s run has been focused on the other members of the Constantine family — even extending it a little bit — and this issue does a pretty decent job of tying that together. Along with that, the proverbial Chekov’s gun of Milligan’s run is finally fired and at a decisive moment that will be particularly powerful to readers who have been following Milligan’s run for the past year or so (and, well, completely lost on those who only picked up this final run).

First of all, the comic is harmed by trying to be both a finale to a series on top of a finale to Milligan’s run. The story is so wrapped up in its whole “death of John Constantine” shtick that it hurts the comic; since the arc’s beginning Milligan has had a hard time convincing readers that John’s fate has any sort of significance beyond that of commercial reasons, and his mumbo jumbo about fooling the fates in this issue is just as contrived. Worse, though, is the unnecessary double fake-out that adds nothing to the plot, and stands only to reinforce the cliches of serialized storytelling.

More importantly, though, this does not seem like a “Hellblazer” finale. The thing is, closing a run is different than closing a series. I know — we should be examining these comics on an issue-by-issue basis, or, on the largest scale, only within the confines of a single creative team’s run, but after a certain point these ongoing series take on a life of their own. Cheating death is nothing new for John. In fact, one of the most critically acclaimed “Hellblazer” stories is all about that. As someone who clearly holds Constantine close to his heart, considering how earnestly and sincerely he writes him (including in this issue), Milligan should know that a smoke and mirrors trick involving mortality isn’t enough to send the laughing magician off. Would it have been easier to end things with John going out in a blaze of glory, giving his enemies one last middle finger before finally disappearing in a whiff of brimstone? Perhaps. Going the route he does, though, Milligan needs to stand out, to show everyone that what he is doing is different. Instead, he succeeds in making John’s action seem every-day, as if this is something he does every Sunday after lunch. Underwhelming doesn’t begin to describe it.

Giuseppe Camuncoli has been Milligan’s primary partner in crime through his run, and for the most part he has been a dependable partner indeed. Through this whole arc, though, Camuncoli’s quality has declined drastically, and very nearly hits rock bottom with this issue. Nearly every panel seems incredibly rushed, as if Camuncoli made only a few quick scribbles and left it up to Stefano Landini to make sense of it. The few action-packed moments in this issue are anything but — the panel where Epiphany clocks Chas, who is strangling Finn, looks more like Chas ran into Piffy’s fist while giving Finn a very bad back massage. Camuncoli’s name is one that appeared on many books in late 2012, but perhaps his workload has finally caught up with him. Impressively, while the faces may be super sratchy and, for lack of a better term, ugly at points, Camuncoli at least doesn’t lose his spectacular talent for facial expression, so that’s a point for his work in this issue.

I am neither Milligan nor Camuncoli, nor am I one of the many readers who have been reading John’s adventures since his appearance in “Swamp Thing.” Still, I can’t help but shake the feeling that this is not the finale anyone, creators included, wanted. Everything about this issue feels half-hearted: John’s explanation for what he has done, the methods he accomplishes it with, and the pencil strokes that depict him doing so. Perhaps the cards were stacked against Milligan: could any fan, new or old, be impressed with the end of “Hellblazer?” Milligan did what he could in the amount of issues he had, and for that he deserves some credit. Still, this week an era ends with a whimper, and not at all with a bang.