Let’s teleport past this introduction and get right into the meat of “I Love Trouble” #1. 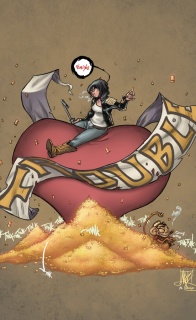 Written by Kel Symons
Illustrated by Mark A. Robinson

“DISAPPEARING ACT”
Felicia Castillo, a New Orleans grifter, is on the run from mobsters in our premiere issue, when she discovers she possesses an unusual superpower in the middle of a plane crash.

Based off an idea by Image publisher Eric Stephenson, “I Love Trouble” attempts to cast super-human powers in something more similar to the “real” world that you and I inhabit. This is not the first time this has been done, but this book takes that concept a little further. Instead of the pure, polite kid getting powers, what if it’s sort of a scumbag that gets them? Powers is even too broad of a term, as Felicia, our main character, gets one power: teleportation. Teleporting is one of my personal favorite superpowers, and when used properly, it can be one of the more unusual powers to explore, as it doesn’t change one’s physical make up. Instead of self-discovery through lifting progressively heavier things (like in Unbreakable), the character is forced to do things that are dangerous in other ways, and entering a more unknown realm than simply pushing oneself physically.

The book asks the question of what a real person, flawed and all, would do if suddenly given the power to teleport? Felicia does just about what you’d expect from someone without the moral code of a hero – she steals some money, shows off her new skills, and tries to get one over on her boss. One of the nice aspects of the script is how it shows Felicia slowly building up her powers, so she isn’t able to suddenly be in Tahiti on the beach, but rather has to get outside first, and then a town over, etc. The story is plotted out in a very cinematic way (more on that in a second), and hits just about all the right beats. The pacing, especially for a first time writer, is excellent, and the story unfolds in such a way that builds a story organically, introduces a ton of plot points without overwhelming the reader, and sets up the next issue really nicely.

Kel Symons, a former film executive, is the writer of this comic, and he represents a backwards migration of folks from movies/television over towards writing comics that started really with Damon Lindeloff and Richard Donner doing short-term projects a few years ago. For the twenty years or so before that, various comic writers have moved over to work in tv/film, like James Robinson, David S. Goyer, Brian K. Vaughan, and many others. But with DC pulling in writers from their TV projects to write their comics, as well as folks like F.J. DeSanto (writer of the upcoming “Insurgent” for DC), for the first time, a real migration towards comics is happening. Symons certainly knows how to pace a story, and his production background helps him visualize not only characters, but entire settings very well. This world looks like a well-designed set, with each location feeling true to the world.

The biggest problem with the issue, however, is the world in which it is set. Not the fictionalized version of our world, but the physical space in which the story takes place. Mark A. Robinson does not appear to be a very good fit for this story, in so much as that it is a story that is trying to be grounded in reality, and his pencils evoke anything but. Every character borders on caricature, each expression almost circus-mirrored out of proportion, and each action over-sized. Robinson is simply drawing in his natural style, but that style is at odds with Symon’s script. Each piece undercuts the other; the tackling of “reality” feels false, and the exuberant nature of the art makes the story seem duller than it is.

Admittedly, once oriented to the work, it begins to work better, initially, it is a jarring juxtaposition, and one that does not appear intentional. However, the potential of this book in different artistic hands is the most lingering thought after having read it. The cartoon-ish elements of Robinson’s work stick out like a sore thumb and take the reader out of the “realistic” tone set by the script.

In interviews with Symons, he has said that Stephenson envisioned this as the start of a shared universe of real life people dealing with being granted super powers in a more realistic setting. If anyone call pull that off, it is Stephenson, and a series of loosely connected minis could be a fun way to put it together. Despite the art issues, this series has a lot of potential, and could potentially build to something really special and unprecedented at Image.