“I, Vampire” has been an oddity for its entire existence as part of the New 52. Creatively stable, the book hasn’t tried too much to try and reinvent itself except, perhaps, to speed things up in the pace department. This issue, while wrapping up the series, still manages to feel almost new reader friendly, which is a testament to the creators involved, but also leaves the long-time reader a little cold. 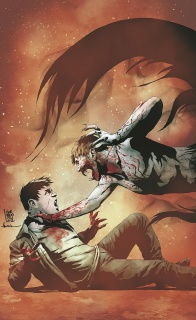 • With this, the final issue, will Andrew Bennett survive to dawn’s light?

It is hard to not use this review as a soapbox to spread the gospel of “I, Vampire.” It is hard not to eulogize the series as a testament to the quality of simpatico creators working together on a project that fits both really well. It is hard to not say that the end of “I, Vampire” signifies the last breath of DC’s commitment to non-Justice League characters.

What makes it easier to just review it, however, is that it is probably the weakest issue of the entire run. And that’s a bummer.

If we’re being really honest, this whole final arc of “I, Vampire” has felt like watching the series on fast-forward. Ideas and themes that would have been better served as slowly developing plot points get jammed into a single issue or less, and feel inconsequential or abrupt because of that. Last issue featured at least three shocking moments, but all felt either like a cheat or like they came out of nowhere.

A good chunk of this is of no fault of the creative team, as they are tasked with wrapping up a series in just a few issues. However, the last few issues of this series are written like the conclusion to a miniseries, where every single thread needs to be wrapped up. These characters, theoretically, can still exist in the DC Universe, and even though they will be seen far less, I don’t know if the book needed to be closed so completely. It is because of that desire to tell the story that completely wraps this tale, the aforementioned quick pacing makes the whole thing feel rushed.

Which, to be fair, is also due to the quality of the art. Since Andrea Sorrentino stepped off the book to do “Green Arrow,” the quality simply hasn’t been there. For a few issues, it was one of the more piecemeal books being released, but has settled into somewhat of a groove with Fernando Blanco on pencils. However, having Blanco and Sorrentino share art duties here does nothing positive to Blanco’s work. Sorrentino simply owns these characters; his Mary and Andrew have such depth to them that, even when they’re murdering others, you can see a bit of their humanity peeking through their vampire eyes. Blanco just draws vampires. No disrespect to him, but it’s true. Sorrentino manages to draw something like a naked Mary, and while being PG, convey the fear, sexuality, viciousness and supernaturalness that exudes from her. Blanco makes her look like she stepped off her shell.

But some of the blame has to fall on Joshua Hale Fialkov as well. Fialkov bites off a lot with both the final arc and this final issue, and some of the areas didn’t need to be delved into. This issue puts a lot of focus on Charles Thompson, the young mage Andrew turned a few issues back. And while Thompson is a fun character (and, hopefully, a reference to Black Francis), this issue needed to be more about Mary and Andrew. Tig and Charles? Meh, not as interesting.

One thing I do have to give Fialkov credit for is for calling bullshit on himself. When a character refers to a plot point as a “deus ex machina,” then you know that the author is fooling no one. Fialkov needed to find a way to end this series, and even if his way is a little clunky, it still works for the most part. Having Sorrentino come back to draw the flashback sequences, including the last two pages, feels like the key to salvaging this final issue. By bringing the book back to its beginning, to showing Andrew turn Mary and her immediate reaction to being a vampire is an inspired place to leave it.

I would think that Andrew will be a player in “Justice League Dark” coming up soon, as he has already guested there, and as Constantine, while appearing everywhere, popped up here quite a bit over the last bit of the book. As for the other characters? Well, we’ve probably seen the last of them for some time, and that’s ok. This was Andrew’s story, and for the most part, he is the part that people will continue to care about moving forward.

Hopefully, the lasting legacy of this book is that something different can work in the New 52. If you had told most readers back in September 2011 that “I, Vampire” would outlast “Justice League International,” they’d have laughed at you. But it did. It outlasted a lot of books that could have, and, frankly, should have, worked better than a relatively self-contained vampire story. And even though Fialkov got an arc to wrap it up, it still stings a bit that the final 7 issues didn’t get to be, instead, the final 27 or 37, or 47 issues, and to let all the rushed ideas instead play out naturally. Even if the finished product came out less than stellar, all parties must feel pretty good about where things wrapped up. Yet “Catwoman” lives on.

(First vampire joke of the review!)