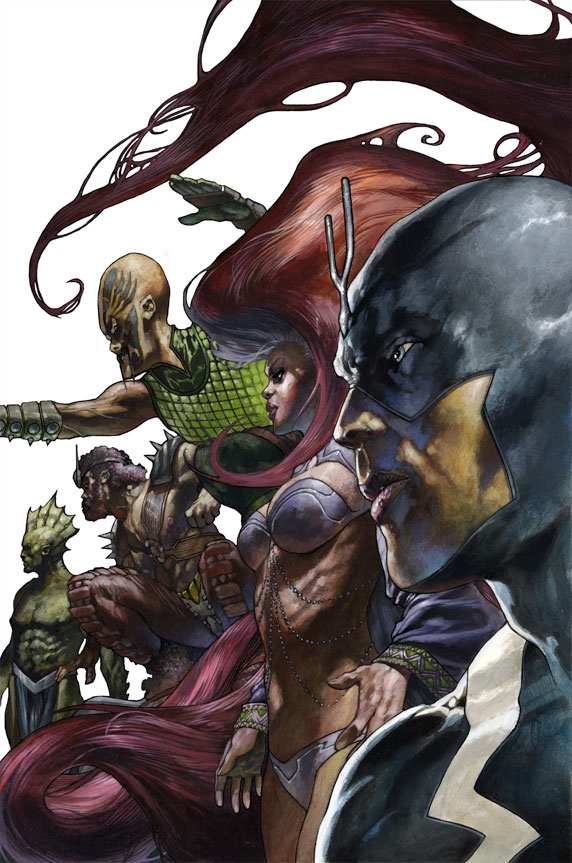 Three issues in, and Infinity is becoming the event comic we all deserve, though it certainly suffers from a few event-related faults. Read below to find out more! 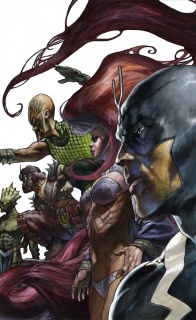 Written by Jonathan Hickman
Illustrated by Jerome Opeña and Dustin Weaver
• Prison break.
• Stealing a worldkiller.
• The fall of Attilan.

It’s funny. Throughout my entire comics reading career (not really career so much as obsession that’s crippled any relationship I’ve had but whatever) I have never been excited for a crossover. Often, I try and skirt around them, usually even skipping any of my favorite books that tie-in to said event. Now though, with Jonathan Hickman, Jerome Opeña, and Dustin Weaver on Infinity, one of the most genuinely epic stories to come out of Marvel in a long time, I am more excited than usual to head to the shop each week.

That said, part of the reason I’m so excited for Infinity is that I am caught up with Hickman’s Avengers continuity. I might have said sometime earlier that it was not necessary to read all of Hickman’s Infinity titles, but oh God how wrong Early-September-Me was! Just read all of Hickman’s Avengers work thus far. This week involved the coming-together of so many Hickman plot points that it’s nigh-impossible to enjoy the main Infinity title without the prior readings.

If you have caught up with the Marvel Now! Avengers series, and thus given Hickman some patience in setting up a lot of plot, Infinity truly delivers. Isssue #3 is split into two sections: one for the battle in space with The Builders and one for the invasion of Earth by Thanos. I’d spoken earlier about how the Builder portion of Infinity was clearly the much weaker one. Here though, the battle in space definitely improves in intrigue. The Builders are given enough of a spotlight to show the type of nihilist gods they are, rather than the spooky faceless force we were all meant to be really afraid of. Here, Hickman’s finallly made the Builder arc a plot on its own, not just an excuse for Thanos to step onto Earth with no problem. There are a few hiccups here (if you don’t like your heroes killing people, even in a war, this may not be for you) but overall it’s fairly smooth sailing. Even Starbrand gets a neat moment! Yay Starbrand!

Of course, another reason why the Builder arc is just better here is Jerome Opeña who has been sorely missed since he left Hickman’s Avengers a good seventeen issues ago. Here, he’s drawing the everloving hell out of this Epic Space Opera Battle Thing. Aside from delivering massive battles and huge scenes of desolation, Opeña gives us a gritty realism within the faces of our soldiers. Captain America is amazing here as the grizzled veteran leading the fight against The Builders, who look suitably alien here. Opeña’s rendition of alien civilizations is just as engaging and the backgrounds are utterly dazzling. If Opeña was the regular artist for Hickman’s Avengers, I doubt anyone would complain ever again.

That’s not to say the Thanos segment is in any way lesser. In fact, it’s still the main draw to actually read Infinity. Thanos’s plan is now clear and the scope as to which The Inhumans connect to this story are revealed here. Without going into too many spoilers, I initially did not plan to pick up the forthcoming Inhumanity, but after this issue I feel compelled to buy it. By rewriting Inhuman history (or at least I think Hickman’s rewriting it. I have next to no knowledge of how The Inhumans work), Hickman builds a new mythology that’s effortlessly fused into the story with one of the most exciting final pages this series has had yet. Granted, there’s still a lot of ambiguity as to what exactly happened but if context clues and general fan theories are to be believed, then shit is absolutely going down.

In the Thanos segment, Dustin Weaver doesn’t fare as well as Opeña. Not that he’s bad in any way, this is probably the best work I’ve seen from him ever, but there are a few more noticeable flaws. While his scenes and general character work is great, Weaver’s faces are more than a little off in some moments (specifically the second-to-last panel Maximus appears in here) but his bigger action scenes are fantastic (including the early references to the other going-ons in the Infinity tie-ins.) However, Weaver delivers one of the best pages in the issue with a particular scene featuring Black Bolt and Thanos. If you’ve read the issue, you know the one. The effects given to the page, as well as the look in Black Bolt’s eyes, are so intense that the moment becomes the biggest one of Infinity yet. Oftentimes, events will slow down in the middle and trudge along, but Infinity is dead set on keeping the momentum going.

Infinity is the type of event that I have been waiting to read since I got into comic books. It’s grand on an epic scale, it’s taken characters I hardly cared about and brought them to the forefront of my attention, and it’s just plain fun. Now, a good portion of the fun comes from being familiar with Hickman’s work thus far and seeing all of his pieces finally click together; but ultimately, Infinity continues to be one of the best Marvel events in a long while.

Final Verdict: 8.7 – Buy! Browse if you haven’t caught up with Hickman’s Avengers!