Event fatigue is a real thing – especially as companies, most especially Marvel, fill their years with more and more events. It takes a lot for an event to feel different from the usual scrum of monthly comics, to stand apart as different than the 10 events that have passed by in the past 5 years, and to feel like the landscape has changed because of the event.

On that front, “Infinity” is mostly a success – but even where it failed, it failed because it dared to be different. 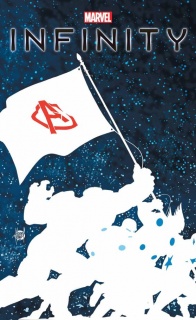 All roads lead to this! The conclusion of the Marvel Universe Event! The heroes of Earth versus the forces of Thanos!

Let’s get this out of the way: aside from a few cities/countries having their collective asses kicked, Earth, post-“Infinity”, looks very similar to how it did before hand. Sure, there is one major difference (and if you’ve read any of the solicits/interviews surrounding “Inhumanity,” that one thing probably won’t come as a shock to you), but overall, the landscape of Marvel Comics looks remarkably similar to how it did before all this began.

In some ways, this is a refreshing development. Sure, we all love a good change of status quo to knock the cobwebs loose, but after every event leaves various books picking up the pieces, it’s nice to see one, more or less, keep things the way they were. A story – a huge story – was told, and now it is over. And that’s ok.

In all reality, this should not have been anything other than an “Avengers”/”New Avengers” crossover. Sure, Thanos is so hot right now, and sure, Hickman is a name that can sell some books, but there is nothing about this that really needs anyone but the casts of those Avengers books. Sure, this issue brought in Star-Lord and Rocket Raccoon, but had the stink of editorial all over it, as they appear without saying or doing much, just waving from the sidelines to remind us that they still exist.

So while it might have been overblown, and it might not have the lasting impact of some other events, the overwhelming feeling I have about “Infinity” is one of delight. I really, really enjoyed this event.

In particular, I enjoyed the scope of it – even if at times it felt overwhelming, every page of this series felt like it mattered. That sounds silly, because of course a huge crossover should matter, but we all know that isn’t the case. Hickman and his rotating cast of artists made every battle seem like it could turn in either direction, and the characters were more somber (or perhaps pessimistic) than we’re used to seeing them. They know how serious this is, and so should we.

And yet, despite that scope, it had a lot of personal moments – Manifold talking with Thor, Cap and Carol comes to mind – and in this issue’s climax, the ending reveals itself to be a man embracing his family’s history and rebelling against it, all at once.

Getting into the meat of this issue, Jim Cheung does some really great work here. His characters look majestic and beaten down all at the same time, which is a refreshing angle to take here; these are proud heroes who probably haven’t slept or showered in far too long. His art in this issue reminds me of the original Star Wars, in so much as the technology/battles look advanced but dirty. In particular, his work on the Cap/Thor/Carol/Hulk sequences was absolutely great. His work with the Inhumans and the Illuminati was a little less consistent, but was still a treat to look at. One of my biggest complaints with “Infinity” is the lack of a consistent artist, and while I like Jerome Opena and Dustin Weaver, Cheung did an incredible job here, and I’d love to see him do more with Hickman in the future.

Story-wise, this issue functions exactly how you’d expect the finale to a major event to function. The story is divided in three – there is the battle in the skies above Earth, the battle with Thanos on the ground, and the Illuminati dealing with Supergiant in Wakanda. The space stuff is dealt with relatively quickly, leaving the other two fronts to take up most of the issue. Of these two, the Thanos sequences are the most satisfying, as there is a really fine mix of heart and muscle on display; as the Hulk is attempting to smash Thanos’s face in, Thane is being manipulated by Ebony Maw. Thane’s struggle is the part of the issue that was the most emotionally satisfying, even if it wasn’t a part that I initially cared much for. Hickman’s script gives Thane the chance to really step into his own as a character, and hopefully sets him up as a major player for Marvel in the future.

The ending of the story is controversial, as it is very similar to something that happened to Thanos back in 1977’s “Avengers Annual” #7/”Marvel Two-in-One Annual” #2 (Hat tip to Multiversity’s Chad Bowers for pointing this out). And I’m not talking about two “Superman outsmarts Lex Luthor” stories, I’m talking very similar. And yes, that sort of sucks. It’s a bit of a cop-out for fans who are familiar with the histories of these characters, and have invested time and money into being Marvel-literate. And while that is far from a perfect way to end the story, Hickman adds a tag at the end, leading into the next issue of “New Avengers,” that makes for a really fascinating future, and somewhat glosses over the lameness of retelling a 35 year old story.

This issue lays threads for a number of big events for Marvel going forward, and overall, is probably the best ending to a Marvel event in quite some time. At least five years, if not closer to ten. Hickman came as close to sticking the landing here as I think he possibly could, and created a memorable event that will, hopefully, lead to similarly effective Marvel events in the future.