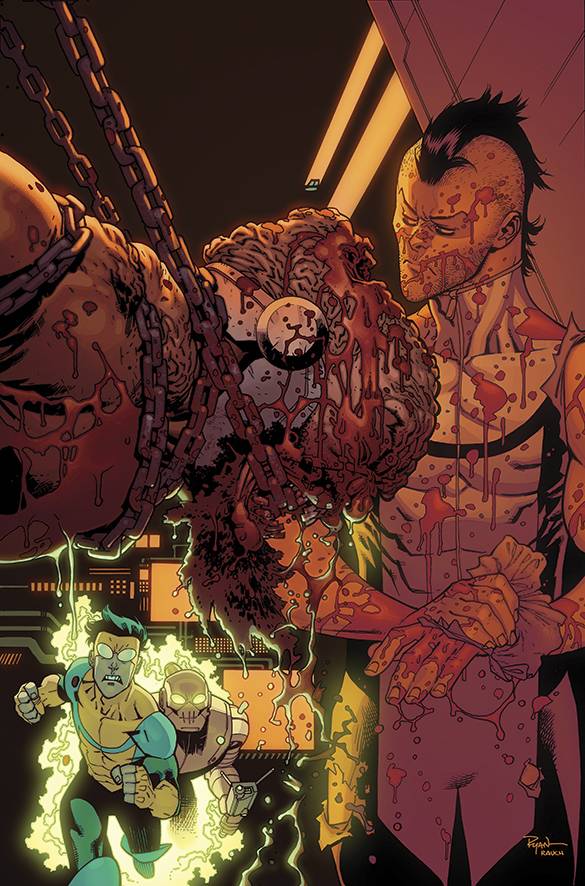 “Invincible” #108 is a huge shake up to the Invincible Universe and an example of how not every comic needs to be a relaunched #1 to be a good jumping-on point. 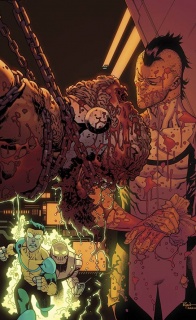 Angstrom Levy’s life hangs in the balance. Invincible to the rescue?

If you’ve been keeping tabs on the comics community recently you’ve almost certainly noticed the trend of reboots: where a series dials back to issue #1 in order to promote itself as new reader friendly. Sometimes this makes a lot of sense, as this can signal a creative change a la the upcoming “Secret Avengers” revamp. Sometimes, Mark Waid just wants to give his title a new direction and occasionally DC Comics just wants me to eventually drop all their books. While this has been almost unilaterally practiced with The Big Two, Image is dipping its toe into the water with the upcoming “Invincible #111” which is being marketed as a great jumping on point for new readers. While this is an interesting statement by Kirkman and Ottley, it’s ultimately meaningless. Why?

“Invincible” #108 is already a good jumping on point. And I’ve never read “Invincible.”

Well, okay, that’s not totally true. My high school English teacher lent the first volume a couple years back, I’ve been told the basic outline of the first few volumes by both spoilers on the internet and this one drunk guy I met at a party, and it’s always seemed like an interesting sister title to Kirkman’s “The Walking Dead,” something I was always interested in reading but didn’t want to have to spend all that time catching up on (my rule for comics, like TV, is to not bother if it’s over 50 issues or two seasons; that’s why the only media I’ve ever absorbed is Firefly and Ales Kot’s Suicide Squad.) But, diving headfirst into issue #108, I found “Invincible” to be a series that doesn’t need a mandated “jumping on” point without ignoring continuity in the favor of appeasing the fabled “New Reader.”

The “ignoring continuity” part is important. “Invincible” #108 isn’t a basic story as there’s tons of continuity involved (Evil Invincibles, Eve’s pregnancy, the friendship between Invincible and Robot) but it’s always presented in a matter-of-fact way. Any info needed regarding the characters is given very fluidly and even when something’s never explicitly stated it’ll make some sort of sense by issue’s end. The first half of the issue, a verbal confrontation between Mark and Eve, is a pretty adult conversation regarding responsibility, which is interesting considering the last time I read this book Mark and Eve were crazy teens. If I was a pure first time reader, I’d think Mark and Eve were always these grown-up figures and it just goes to show how continuity can really let a series grow when it runs for so long. It also allows the story, characters, and settings to fall apart as long-established establishments of the “Invincible” series fall apart. Without going into spoilers, I was shocked by this issue’s ending — and I don’t even know most of the characters involved.

Even if I wasn’t enthralled in Kirkman’s writing, I think I’d still be onboard for the series through Ottley’s art. “Invincible” has been described before on the internet as “Spider-Man with Superman’s powers” and Ottley’s aesthetic fits in neatly with that mission statement. Though his faces are a bit odd at parts, especially in quieter scenes, Ottley excels at action; namely, gore. Holy moly is this guy good at drawing bloody parts flying around. Sure, it’d be easy to go ahead and say Ottley’s really good when it comes to the action scenes and a little so-so when it comes to some panels, but somewhere in the second half of the issue (which brings a change in location and tone) he really shines, especially when it comes to the depictions of villains Evil Invincible Guy and Angstrom Levy, as well as the silent panels that foreshadow the issue’s twist. Ottley’s a great artist for “Invincible” as he brings the youthful energy Mark Grayson calls for while subduing it with a more subtle maturity that the series has fostered alongside Invincible himself. Again, he’s also really good at the gore thing.

So really, even though “Invincible” is advertising its soft-relaunch in a couple months, it seems to be ultimately unnecessary. “Invincible” #108 didn’t confuse me or make me wary about the series; if anything it made me want to read past volumes while keeping up with the forthcoming issues. While a lot of books nowadays are giving in to the fad to reboot, it may not be ultimately necessary as “Invincible” #108 proves that it can still be a good idea to drop into a book at any random number.