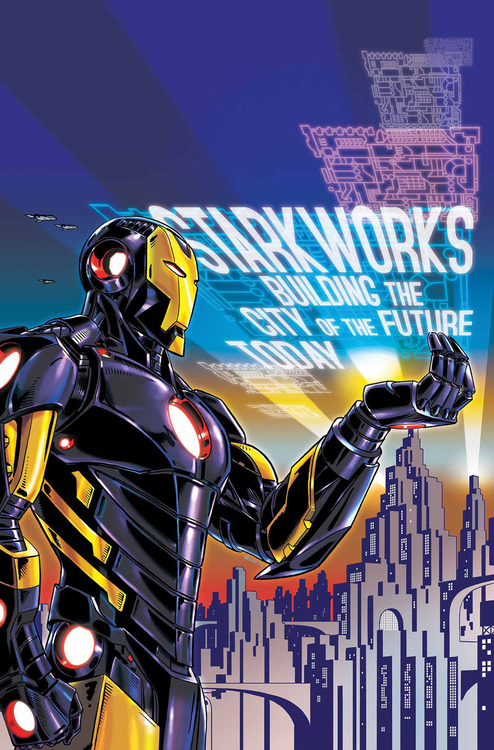 Kieron Gillen and Joe Bennet begin a new era for Tony Stark in the first part of “Iron Metropolitan!” Read below for our review! 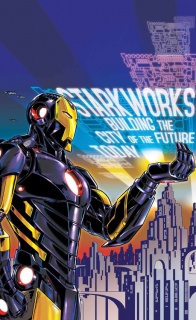 AN ALL NEW ARC BEGINS! “IRON METROPOLITAN” PART ONE!
TONY STARK has returned from space with a vision of a better world.
Who is his secret ally? What is his secret resource? Who on Earth would stop him?
The MANDARIN is dead. He died at the end of Fraction’s run. There’s probably a reason why we’re mentioning it.

To be completely honesty, I haven’t been reading Kieron Gillen’s run on Iron Man, and this is in fact my first issue. Maybe that’s why my first response to the recap page was a resounding “Whaa?” that would make any sitcom character proud. Without spoiling the end of “Secret Origin” (which actually followed through on its promise and changed the Stark status quo in some… unexpected ways…) I can easily say that Gillen has set up a new playground for Iron Man and his newly expanded supporting class to work in. And here in this issue is where the working begins, with the foundations being laid for an “Iron Metropolitan:” to cities what the Iron Man armor is to suits. The plan for Iron Metropolitan (or Troy as it’s named in the book as a feat of pure hubris) is to save the world, but something will inevitably go wrong which brings in forces to try and stop Tony. Couple this with the new(ish) member of Tony’s entourage and you have a very interesting story.

One thing that seems to be difficult about writing Iron Man is his deal with fascism. Not that Iron Man is a Capital A Fascist, nearly every hero Marvel’s publishing now has some casual elements of fascism in them. Heck,  the last issue of Infinity was basically Western Imperialism: The Space Opera. I’m not comparing fictional superheroes to the real-life fascists who caused a number of unspeakable tragedies, but if the subtext here in this issue any indication, it’s a shame that only Spider-Man got the Great Power/Great Responsibility speech. Tony’s heart is in a good place,  but hearts in good places are only harmless when those hearts don’t belong to people who can change the entire structure of a planet’s technology over the course of a bored weekend.  Stark is a powerful name, and Gillen makes it clear here that even if the actions are meant for the greater good, the actions done by a Stark will carry power and power always has the potential to hurt someone.

That’s not to say Tony’s completely in the wrong here, we’re all still ostensibly rooting for him, but Gillen’s establishment of a debate adds conflict to this story beyond someone smashing Iron Man’s project before he can finish it. That said, most of this issue is indeed debate. Even the major action sequence is relatively consequence-less. So while there is a lot of posturing and ideology to be found here, it is, for better or for worse, “Part One” of a story. Everything’s established here and the real conflict probably won’t begin until next time.

The revived(?) villain comes with a new design from Joe Bennet who does a solid job throughout on this issue. Gillen said somewhere that Land was such a great collaborator due to his ability to make characters seem almost plastic or artificial, like the book was delivered through Tony Stark’s eyes. Bennet is able to deliver that without any of the stiffness and Landness of Greg Land. Aside from drawing the heck out of this issue’s one fight scene, Bennet delivers some really striking images such as “The Iron Rain” or 451’s post-“Secret Origin” status. Bennet’s not the only one doing a great job with this book. Aside from Paul Rivoche’s amazing covers, Tim Leong delivers what is probably the coolest Iron Man title page in years. Seriously go find it and look at it, it’s gorgeous.

The first part of “Iron Metropolitan” looks to be a promising start to an intriguing series. The biggest problem would probably come from the relative decompression of the issue, but it’s a comic that would read much better in trade than in floppies.