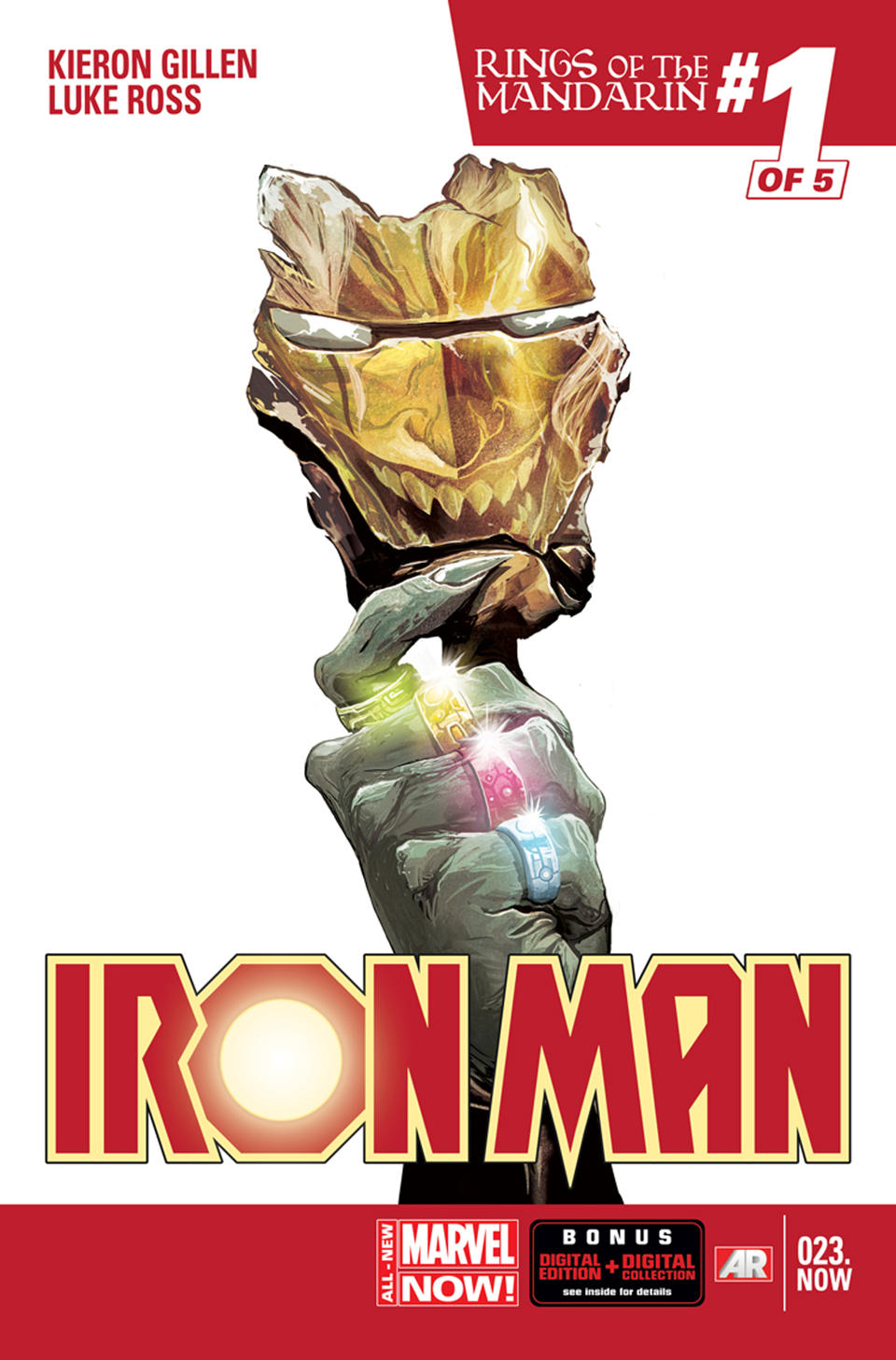 If you thought the one thing missing from Thor: The Dark World was Tony Stark wandering through the Elf kingdom of Svartalfheim, than “Iron Man” #23 has you covered in a surprisingly effective issue. 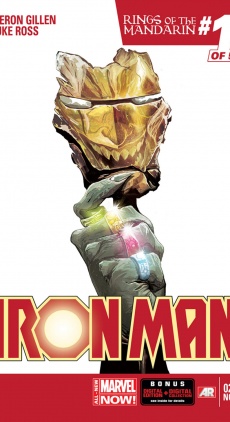 if there’s one thing that sets Tony Stark apart from the rest of the Marvel Universe’s heroic inhabitants, it is the fact that he has no super powers. And that he’s a raging alcoholic, put mostly the lack of superpowers. Like his Gotham City counterpart, Stark has gotten by on his wits, ingenuity, and more money than the combined GDP of several countries. Stark’s feet are firmly planted in the world of the technological, in the mechanical minutia that lets him stand with gods. His recent sojourn into outer space was a natural extension of the character nuts and bolts personification. Which makes the ancient Eleven kingdom of Svartalfheim, an interesting place to open the latest issue of “Iron Man”.

It seems as though the deceased Mandarin, Tony Stark’s arch nemesis, is still pestering him beyond the grave. The ten rings, from which the Mandarin derived his power, have escaped from S.H.E.I.L.D. containment and are seeking out new owners. One ring travels to Svartalfheim and the throne of Malekith, ruler of the Dark Elves (and now movie star). The Elf ruler has always had his sights set on Midgard aka Earth, and the ring will give him just the boost he needs. Stark meanwhile, is already dealing with one of rings new owners, when Malekith makes his move. Realizing the threat the rings pose, Stark grabs his cloak and sword (ok its just another suit of armer) and heads into the Elf world.

Kieron Gillen has been scripting “Iron Man” since the Marvel Now relaunch, and while sales of been solid, buoyed by the massive success of the films, reviews have been mixed at best. Tony Stark’s sojourn into outer space and team up with the Guardians Of The Galaxy came across more as galavanting than the actions a dynamic hero. While on paper it seems like Elf worlds are a far worst fit than outer space for Tony Stark, what makes the premise work is how Gillen crafts the characters attitude. While movie Tony Stark is new to the world of multi-dimensions and partnering up with gods, comic Tony Stark has been on this ride over and over again. Gillen writes Stark to be completely unfazed with the prospect of venturing into Thor territory, as it is simply the most practical solution to the problem.

This is a .NOW book, highlighting it as a jumping on point for new readers, and it is fairly successful in the goal. The opening exposition is fairly standard and while catch new readers up to speed, give Thor: The Dark World views a nod of recognition, and just plain bore longtime series readers with the very basic information. This was simply unavoidable, so Gillen wisely keeps the scene to a the minimum numbers of pages. Afterall, if readers wanted to read entire books about the history of the Nine Realms, they could just pick up “Thor”. Gillen keeps Stark his snarky, cynical self, but allows enough moments of actual thought and planning to demonstrate that Iron Man always as his eyes on the big picture.

Luke Ross steps into illustrate Tony Stark’s journey across the realms, the first time the artist has ever pencilled the “Iron Man” series. As this issue opens in the most un-Stark like of places, Ross immediately gets a chance to show off some versatility. The scenes in Svartalfheim are marked by lush green forests and blue skinned people, which manage to feel appropriately ancient and medieval. Ross is sure to include several wide vistas, and it feels like the Game Of Thrones music could start playing at any second. The design of the Dark Elves themselves fits their name, but it is slightly disappointing to see that they all look pretty much the same. Malekith is set apart by his Braveheart-esque face paint, while his throne room looks fittingly primeval and ominous. The room is nearly too dark and shadowy, but Ross reigns the atmosphere in just enough so that the details can be clearly seen.

The jump to New York City is a little jarring, but definitely feels comfortable for Ross. As his recent run on “Secret Avengers” demonstrates, he is very capable of drawing traditional superheroics. The unfortunate wielder of one of the Mandarin’s rings looks intentionally out of place. He isn’t a super villain, he was an angry guy who accidentally ended up with a very powerful weapon. The choice to have Malekith appear in the NYC scene was smart, as it preps the reader for the mix of real world and fantasy. Ross successfully keeps the two close together in style, so the Elf ruler’s presence looks surprisingly natural. The design of Stark and his suits stays close to his traditional model, no weird haircuts or anything. Those are saved for magical advisor Dark Angel, who apparently has been listing to a lot of Skrillex. The second half of the issue lacks big actions scenes, so the art becomes just a little boring. It’s not Ross’ fault, there’s only so many ways one can pencil a guy in a metal suit standing in metal lab and make it look interesting. As soon as Stark takes the plunge into Svartalfheim, it becomes something very different and exciting.

“Iron Man” #23 takes the mystical and technological aspects of the Marvel Universe and mashes them together, with the result being surprisingly cohesive. Kieron Gillen wrote a acclaimed run on the Thor-themed “Journey Into Mystery”, so another adventure through the Nine Realms plays right into his strengths. He was wise to keep Stark’s cynicism and general weariness with the magical elements of the world front and centre, as he essentially becomes the voice of the audience who were not expecting Elves to show up in their “Iron Man” book. Artist Luke Ross deserve a lot of credit for combining the two worlds successfully, as he kept both realms grounded in his realistic style.

Final Verdict: 7.5 – Browse. One of the more peculiar “Iron Man” adventures in recent memory, and likely isn’t for everyone. However, if you loved that scene in The Avengers where Stark makes fun of Thor and Loki, you’ll enjoy this book.